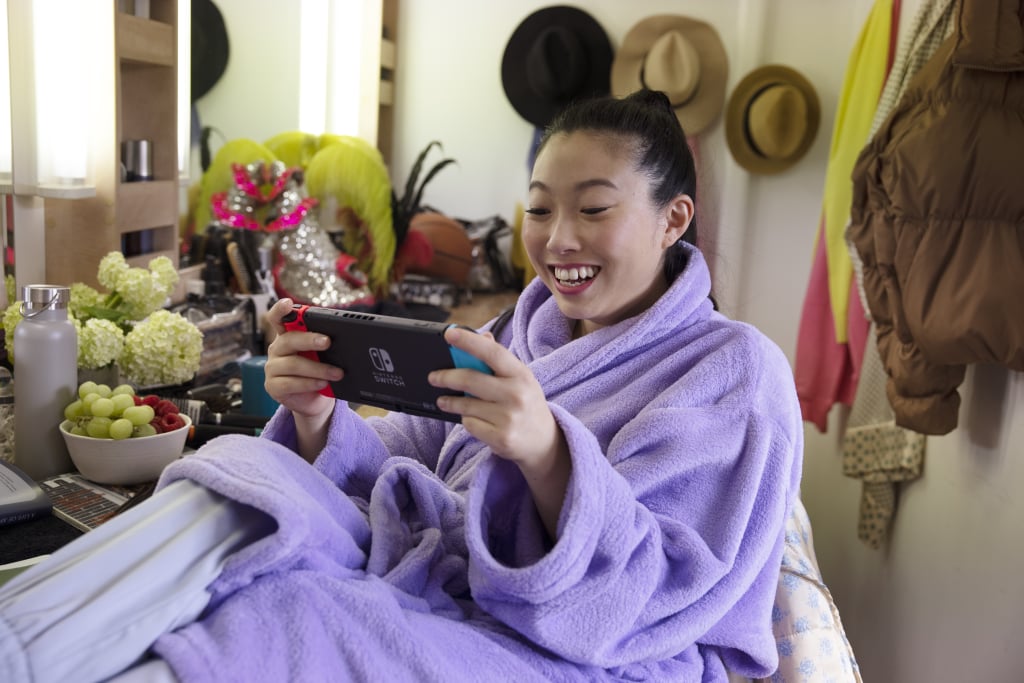 Awkwafina on How Gaming Has Gotten Her Through 2020: "It's a Way to Unwind"

The last several months haven't been easy for anyone, but if there's one silver lining, it's that many of us have taken up or renewed our interest in hobbies like baking, knitting, writing, working out, or jigsaw puzzles as a form of self-care. For Awkwafina, that hobby is gaming.

"Obviously it's been a devastating time for everyone," the Golden Globe-winning actress recently told POPSUGAR. "It's not easy, and I think at the very beginning of this lockdown, what we really needed to do was be responsible, stay home, and keep others safe."

It was at the beginning of the COVID-19 pandemic that Awkwafina first became familiar with Nintendo's hit game Animal Crossing: New Horizons, an open-ended social simulation game with no real objective. "All of my friends were talking about Animal Crossing: New Horizons, and I was like, 'I don't know if I'm going to be into that' — and [it turns out] I was addicted," she said. "I've logged hundreds of hours. It's also this opportunity for you to hang out with your friends in this totally different way."

Awkwafina uses the game to connect with family members from afar, and often plays with her cousins, who live in New York, when she's in LA. "It's a really good way to stay connected," she said. "It kind of did reflect where we are right now. I've definitely been using it a lot."

Although playing Animal Crossing: New Horizons was new to Awkwafina this year, gaming was not. The actress and rapper grew up playing game consoles, especially Nintendo. "Since I was a kid, it's been a fixture of my life," she said, noting she loved Donkey Kong, Super Mario World, and Mario Kart on Super Nintendo and continues to play the retro games via an extension on her Nintendo Switch. "It played a big role in my childhood, and to see how the games have evolved and to see how it as a technology has evolved to where it is now, that makes it accessible for me to play with (others virtually). It's just really cool that in my adult life I'm still playing."

Awkwafina is now even professionally involved with Nintendo, starring in a newly-released commercial for the Switch. "It was really exciting to shoot the commercial and be a part of it," she told POPSUGAR.

To see more of what Awkwafina had to say about her new campaign with Nintendo, why she hates the stereotype that gaming is just for men, and why she thinks more people should give gaming a try, keep reading.

Anthony Mackie
Anthony Mackie Does His Best to Shut Down Captain America Rumors, but We're Not Fooled
by Grayson Gilcrease 5 days ago

Music
MILCK Is Combating Racial Injustice Through Music: "Our Country Needs to Evolve and Heal"
by Monica Sisavat 5 days ago