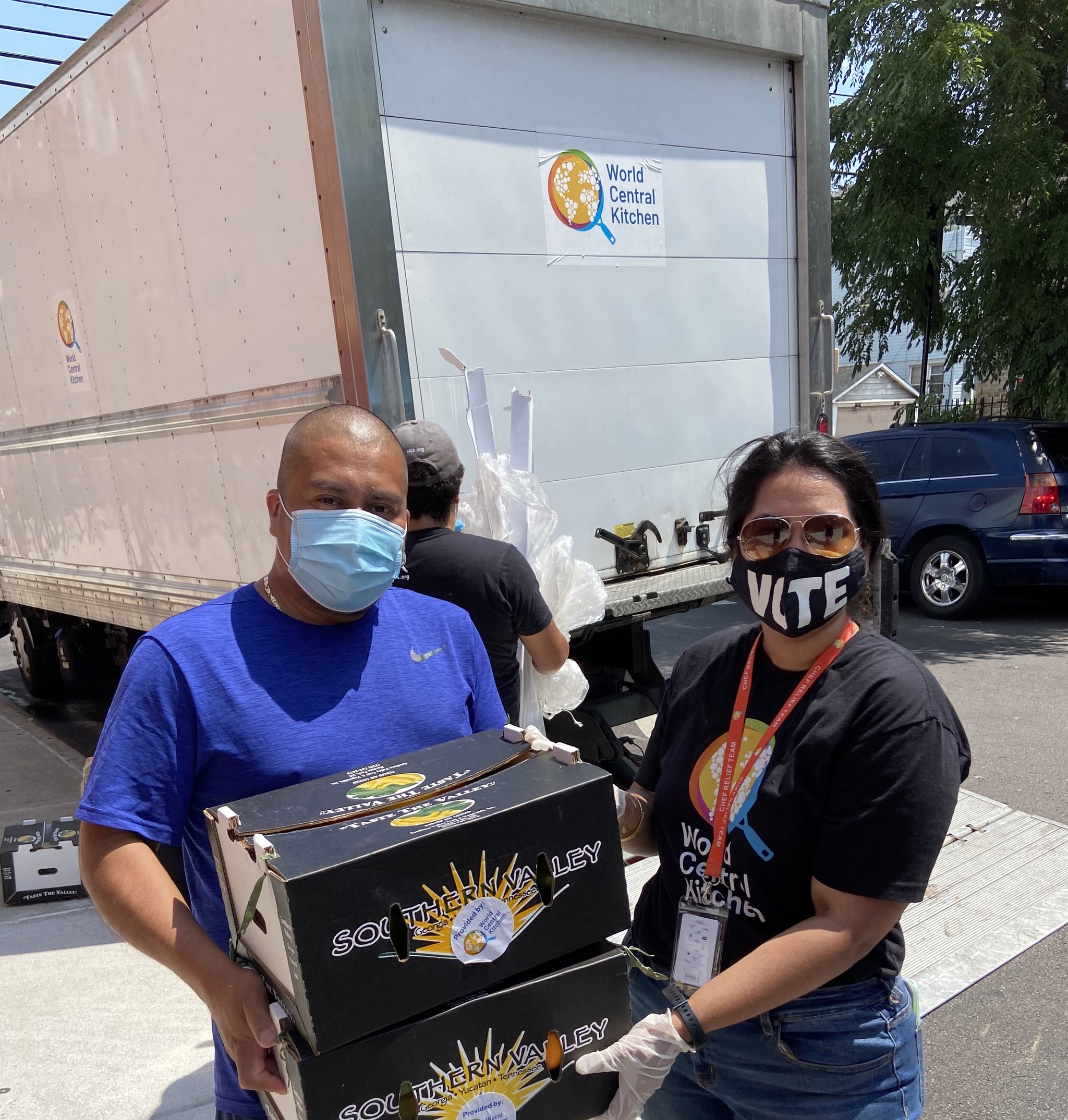 Opal Vadhan is the executive assistant to former Secretary of State Hillary Clinton and a volunteer for World Central Kitchen. This piece reflects her own opinions and not necessarily those of WCK or its employees.

Gloria, an elderly woman, brings her blue chair at 6 a.m. on a Monday so she can be the first in line for food. Andrea, 14, and Marcella, 7, are two sisters waiting patiently in line with a cart to bring meals and farmers' market boxes to their family. Tyler, a 14-year-old boy, waits in line for a box to bring back home for him and his dad because his dad is sick. Valentín is waiting in line for food because he got laid off in March from the catering company where he'd worked for years; the food he picks up helps him, his wife, and his two kids survive.

These are a few of the countless stories of people I met at World Central Kitchen's food distribution lines. It doesn't matter if it's 90 degrees, or if it's raining — the lines stretch for blocks. It is heartbreaking to see so many seniors, mothers with strollers, and children waiting for the only food they may have access to that week.

I knew I couldn't just sit at home while so many people were struggling in the city I love so much.

On March 22, just days after New York City effectively shut down, I was restless. Yes, in part because I'd already cooked more than I ever had, tentatively gone for a few runs, caught up on sleep, and had many FaceTimes with friends I hadn't talked to for too long. But mostly, I knew I couldn't just sit at home while so many people were struggling in the city I love so much. I saw on social media that World Central Kitchen had just started offering free meals to New Yorkers, and I texted a friend who used to work for the organization's founder, Chef José Andrés, to ask if they needed volunteers. Little did I know what I was getting into; I thought I'd be serving meals a few times a week. Instead, it would become my life for the next six months.

Since that fateful day, World Central Kitchen has served more than eight million meals in New York City, given away more than 100,000 farmers' market boxes full of fresh produce, and paid 180 struggling restaurants to cook nourishing meals for their neighbors in need. We've been able to provide meals in five boroughs, Long Island, and New Jersey. With the help of Bloomberg Philanthropies, we served over one million meals at the 16 NYC public hospitals and offered dinner every night to nurses who came from all around the country to work in our hospitals. We've enabled restaurants to hire back their teams and keep their doors open and families to cook their own meals with fresh produce from our farmers' market boxes.

The team quickly taught me everything I needed to know to be a useful part of their massive operation. From Corona, Queens, to Harlem to Newark, NJ, we would don our masks, gloves, and hand sanitizer and get to work serving around 100,000 meals each day. 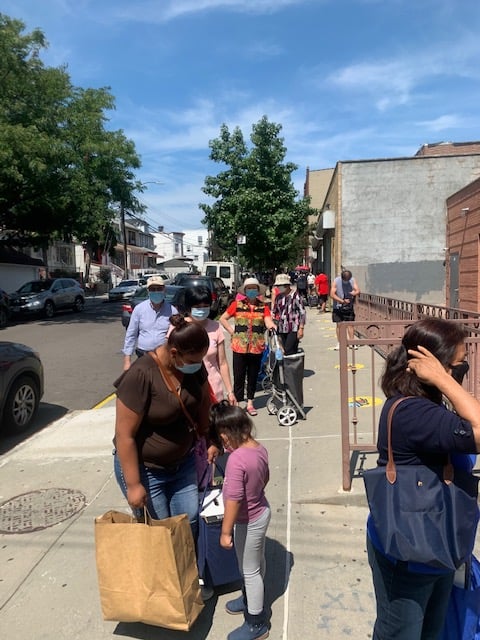 The line to pick up WCK meals in Corona, Queens.

It was hard, brutal work. There could be none of the usual hugs or high fives among the team; we had to ensure that everyone stayed six feet apart to keep each other and the people we were serving safe. A number of us, including me, even moved into a hotel to protect our families from exposure.

There could be none of the usual hugs or high fives among the team; we had to ensure that everyone stayed six feet apart to keep each other and the people we were serving safe.

But what I immediately loved about World Central Kitchen was its mission: that it doesn't matter your race, gender, age, sexual orientation, income, political or religious views, or where you came from — if you need a meal, you get one. The only thing we ask when someone gets to the front of the line is how many meals they need for their family.

It wasn't always easy. One day I was serving meals at The New Yorker Hotel, where my boss in my usual life, Hillary Clinton, famously gave her concession speech in November 2016. I met a nurse from Decorah, IA, who had come to New York City to work in one of its hospitals; World Central Kitchen was serving her team dinner every night. She was wearing her Donald Trump hat in line, and as I served her, I couldn't help but think that if former Secretary Hillary Clinton were president, we probably wouldn't be in this situation. But none of that mattered. She was hungry, and she had come to New York to help, and I was happy to serve her a hot meal. And after seeing her day after day, I came to learn she didn't like red meat.

Anyone who knows me knows that I love New York. This city has given my family so much: it's given me the chance to live the American dream. My parents migrated to New York from India; my dad worked at a Toys "R" Us when he first arrived here in the late '70s. My mom tells me that the moment she got off the plane at JFK Airport, pregnant with me, she gave up on her plan to raise me in India. She knew she had to stay here to give me a better life.

Related:
From Justin Bieber to Rihanna, Stars Are Giving Back During the Coronavirus Outbreak

I grew up in Queens and went to Pace University in NYC. In 2015, I was on the advance team for Hillary For America, Hillary Clinton's 2016 campaign. This gave me the opportunity to travel all around the country visiting new cities, but I always found myself looking forward to coming back home to New York. In March, when the pandemic hit, I sat in my apartment for those first few days listening to sirens go by. It was like nothing I'd ever experienced. Now NYC is open for outdoor dining, people are taking public transportation, our COVID-19 infection rate continues to be under two percent, and the nurses from out of state have moved on to deal with the crisis in other states — but the lines for food have only continued to grow.

One in four Americans is skipping meals or relying on food donations during the pandemic.

One in four Americans is skipping meals or relying on food donations during the pandemic. I truly believe that, pandemic or not, no one should ever have to wait in line for food in one of the richest countries in the world. During the last six months, I've seen my social media feed full of people with access to expensive groceries making one Alison Roman recipe after another — and then, in person, I see the daily lines that stretch for blocks. It shouldn't be normal seeing seniors or children waiting in line for food. We are so much better than that as a country. Everyone should have access to healthy, delicious, and nutritious meals. As Chef José Andrés says, food insecurity is a national security issue. And it shouldn't be up to organizations like World Central Kitchen to have to ensure that no one is going hungry while the government tries to cut the SNAP program (previously known as food stamps). 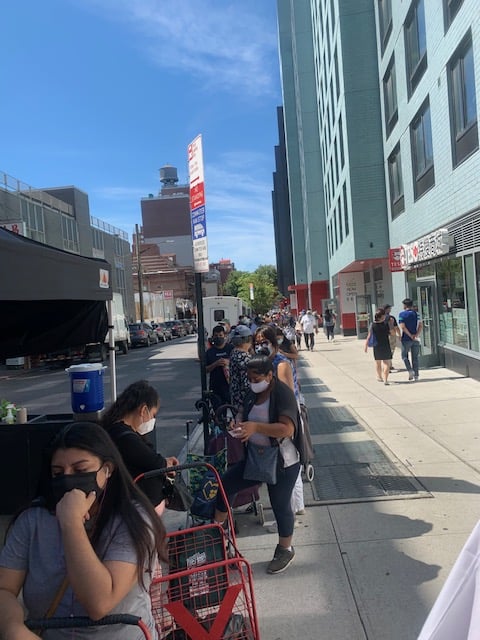 The line to pick up WCK meals in Flushing, Queens.

These past few months have been heartbreaking and emotionally exhausting, and I've found myself feeling guilty and helpless for not being able to do more. So many of the people I've spoken to have had their own battles to overcome in these past few months, whether it's battling COVID-19, losing work or worrying about housing, or confronting the racial injustices in our country. This hasn't been easy on anyone.

Hillary Clinton has always lived by the saying, "Do all the good you can, for all the people you can, in all the ways you can, for as long as you can." And I try to live by those values every single day. I'm so grateful to her and my colleagues for giving me the space to become a full-time volunteer. She sends me texts that make me smile and surprised our team by calling in to the WCK staff meeting. There isn't a day that goes by where I don't think how different our country would be if she were in charge.

Related:
This Is Why It Feels So Good to Give Back

I am just a tiny part of the local World Central Kitchen operation. I work with brilliant people who are passionate about helping people in need, as well as incredible partners, restaurants, and volunteers across New York and New Jersey. And we are a small part of the larger World Central Kitchen operation, which continues to serve meals wherever they're needed. The organization was in Beirut within 24 hours of the massive explosion there, served tens of thousands of meals to displaced families and first responders during the historically massive California wildfires, and continues to track the longest hurricane season in history.

But the incredible World Central Kitchen can't continue without your help. As a proud American whose heart breaks for her country, I really believe our government should be doing more, so vote to affect positive change that doesn't leave it up to WCK to make sure no one goes hungry — you'll see me on the ground wearing my "VOTE" mask for that reason.

Amazon
Cyber Monday Deal: Amazon Is Selling a 50-Pack of Disposable Face Masks For $9
by Macy Cate Williams 1 day ago