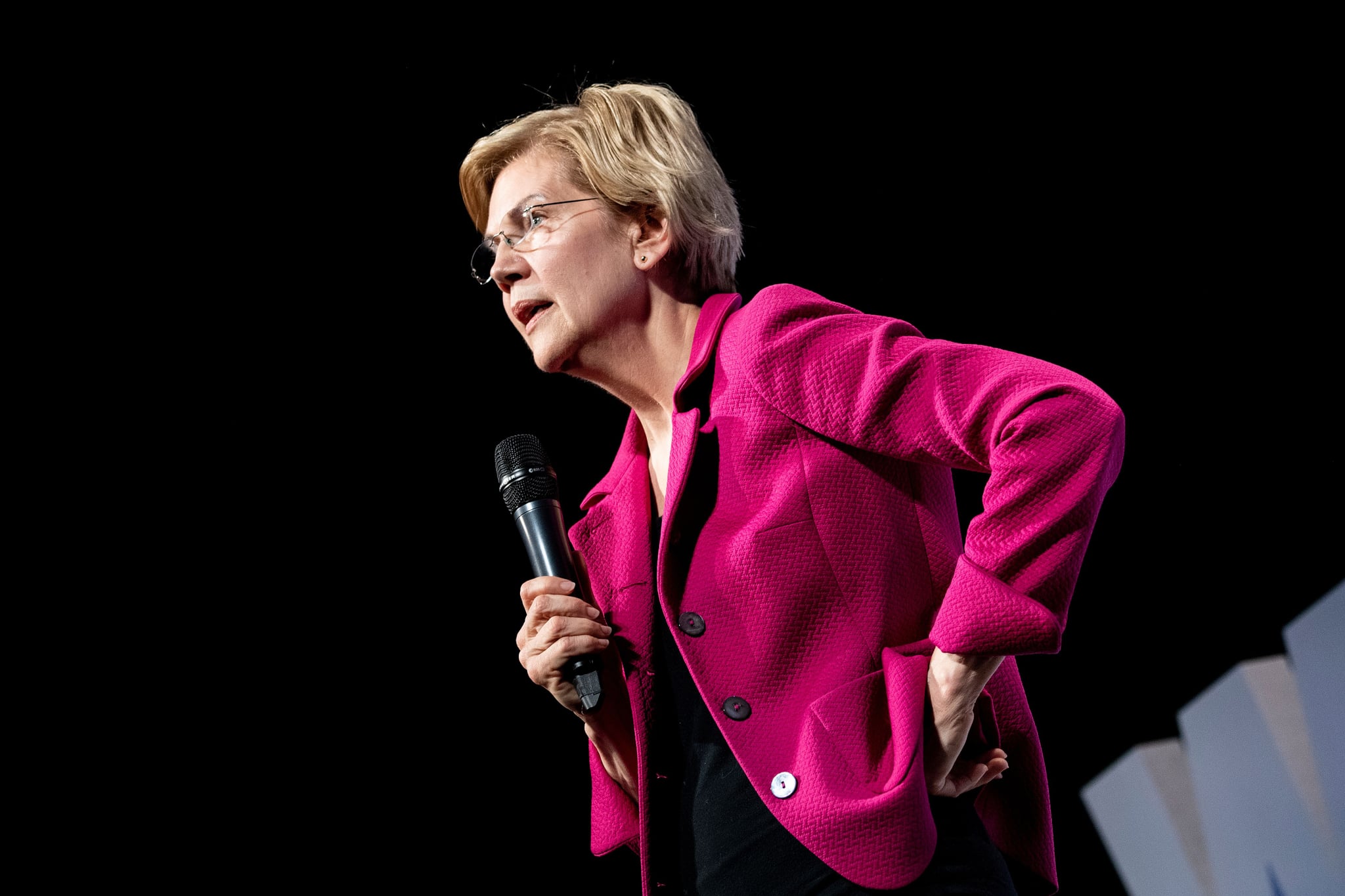 Earlier this week, CNN hosted a series of back-to-back town halls with Democratic presidential candidates Elizabeth Warren, Amy Klobuchar, Kamala Harris, Bernie Sanders, and Pete Buttigieg in one night. The question-and-answer-style event was hosted by all male moderators and saw the presidential hopefuls dive into a wide range of issues, from extending voting rights to prisoners to the question of impeaching President Donald Trump. Other notable topics of the night were women's rights and sexism in politics — yet, only female presidential candidates were asked about these topics.

Klobuchar, whose town hall came first, fielded questions from CNN's Chris Cuomo about the gender wage gap and her "message" for young women voters. Warren took a personal question about how she would handle the sexism former Democratic presidential nominee Hillary Clinton had to deal with in 2016. And finally, Harris was asked how she would empower women in the workforce and "level the playing field."

This line of questioning made one thing clear: in the eyes of media men, only female presidential candidates, and not their male counterparts, shoulder the burden of addressing sexism. So long as men are leading the conversations at town halls, as we saw on Monday night, viewers will continue to see the world exclusively through the lens of men like Cuomo — who is one of CNN's three, all male primetime hosts — allowing subtle but harmful sexism to permeate all media coverage.

Perhaps, as Monday night's questions for candidates would suggest, sexism might not directly impact men like Sanders and Buttigieg in the same way it does Klobuchar, Warren, and Harris. But both men carry the same obligation — if not a greater obligation, due to their privilege — to address sexism in their policies, rhetoric, and allyship. If either man were elected president, being male wouldn't magically dismiss them from handling gender issues in office.

It's critical that media ask all presidential candidates about their plans to protect and advance women's rights and speak truth about the sexist ecosystem of American politics. But if anything, it's arguably even more important that male candidates are asked about sexism: specifically, about their privilege as men, and how they plan to listen to and uplift women's voices and experiences in their campaigns and platforms. Women are not responsible for creating the patriarchy, and by no means should we be exclusively responsible for dismantling it.

When we normalize this allocation of responsibility for tackling sexism to female politicians and leaders, we give male politicians — including even those who identify as allies — a pass to be unprepared and uninformed about key issues affecting women's lives.

Unfortunately, we're already watching this unfold. At a Fox News town hall earlier this month, Sanders gave a misinformed answer to a question about so-called "late-term" abortion, stating that women "terminate a pregnancy up until the moment of birth" only "very rarely." As several women's rights advocates have since pointed out, this imagined situation doesn't happen "rarely" — it happens never. Cursory research or really any prior forethought about women's health and experiences could have prevented this dangerous and ignorant answer, which will ultimately serve to advance right-wing propaganda and hateful anti-abortion messaging.

In a similar vein, meaningful consideration into the experiences of working mothers and the tremendous labor many women must devote to child care could have prevented fellow Democratic presidential candidate Beto O'Rourke from his notorious "joke" that he "sometimes helps raise his children" alongside his wife, Amy.

The comment may have seemed merely flippant if not harmless on the surface but is deeply offensive when we consider how a joke from a female politician about being uninvolved in child care would be all but career-ending. Yet, O'Rourke only apologized for his comment after receiving vocal criticism from feminist writers and, notably, has yet to receive a question about the joke from male prime-time journalists.

When media fails to hold male politicians accountable about what they're doing to proactively support women, male politicians internalize that it is not their responsibility to put in the work to fight for us, let alone put in the work to accurately answer questions about women's rights and lives. And when they can't answer basic questions — or they offer offensive, passing jokes about our lives and our labor — we see up close their lack of effort and assumptions that questions about women's rights are exclusively reserved for female politicians.

Viable female presidential candidates may be running in unprecedented numbers, yet gender-specific questions continue to treat them as a political "other" in the field. This isn't to say that female politicians don't bring unique, deeply important perspectives about sexism and women's rights based on lived experience. But all politicians should be made to think about sexism in politics and the role they are morally obligated to play in combating sexism, regardless of their gender.