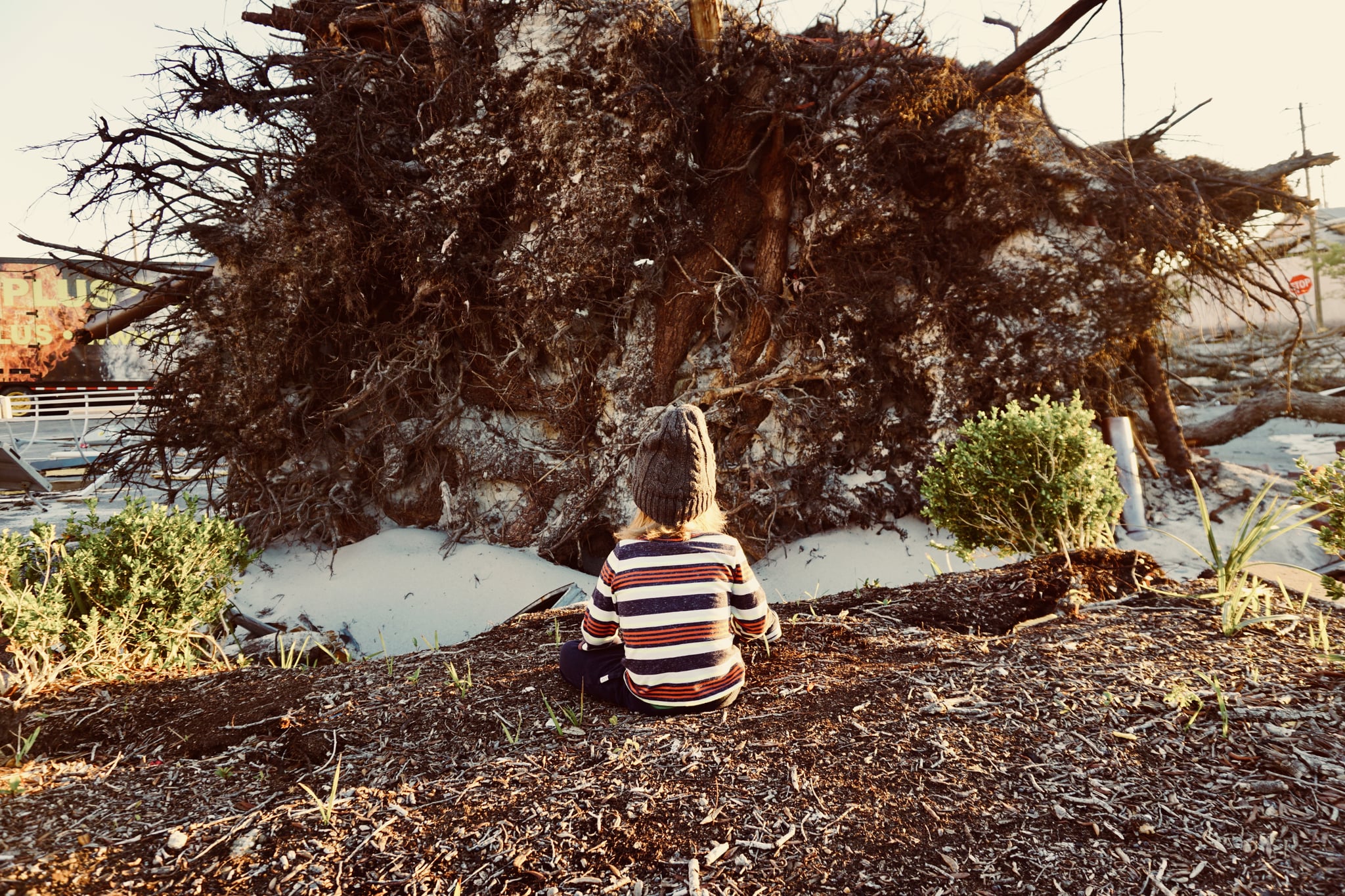 Hurricanes are nothing new to the Florida Panhandle. A lot of people around Panama City, where I live, consider hurricane season a fifth season that falls somewhere in between Summer and Fall. When the news stations go haywire, we throw hurricane parties and stock up on booze and snacks. We roll our eyes and snicker because we know that we'll get a few days off from work and have some extra bonding time with our friends. Worst-case scenario, we lose power for a day or two and see a few street signs blown down.

With the exception of Hurricane Opal in 1995, Bay County's track record has been good for so long that I often wondered when our lucky streak would finally end. I never could have imagined that when it did, it would be this detrimental.

If I were to make a guess, I'd say that 90 percent of all Bay County residents did not evacuate for Hurricane Michael. That's close to 170,000 people who endured winds peaking at 155 MPH.

In less than 20 hours, the storm went from cautionary to life altering.

Judging from afar, people will probably question our decision to stay. They might even go as far as to say it's our own fault. But what most people don't realize is that our City Center was not ordered to evacuate. Only the areas in threat of storm surge were — primarily our beach and anyone living in mobile homes. The irony is that most of our beach residents evacuated inland to Panama City, and Panama City was demolished.

Also, keep in mind that Hurricane Michael underwent major changes between 4 p.m. on Tuesday, Oct. 9, and 1 a.m. on Wednesday, Oct 10, and was upgraded from a category 2 to a category 4 storm. By the time it made landfall about 12:30 p.m., it was one notch away from being a category 5. In less than 20 hours, the storm went from cautionary to life altering. It changed so quickly that it was too late for people to get out. The hurricane's force was compared to a massive EF3 tornado (the third most devastating tornado). In terms of pressure, Hurricane Michael is the third most intense hurricane to hit the mainland United States, after Hurricane Camille in 1969 and an unnamed Labor Day hurricane in 1935.

In Panama City, we were fighting to survive while the rest of the world was back to business as usual.

My neighborhood was hit hard, just as hard as my mother-in-law's, my parents', my best friend's, my third grade teacher's. There wasn't an area of our city that wasn't heavily impacted. My family (four adults, one 4-year-old child, and two dogs) rode out the storm in my 1,400-square-foot home. It was terrifying, to say the least. Trees crashed around us, the walls shook with fury, and the wind whistled in our ears like a freight train. If we lost our roof, we devised a plan to sit in my car, which was parked under my carport. It wasn't much of a plan, but it was all we had. We got lucky and didn't lose our roof.

I later discovered that my friend, who lives one street over, did. She, her husband, their 5-year-old, and their 18-month-old huddled in their car during the worst part of the storm after their roof had collapsed. Another friend of mine lost her roof along with the safety of her car. She had no choice but to run outside, into flying debris, falling trees, and monstrous winds, to take cover at their neighbors' across the street. My friend Christy and her husband were trapped inside their home for three days after the storm with their 2-month-old and their toddler. By the time they were rescued, they were down to one bottle of water and no ice. The horror stories are endless. 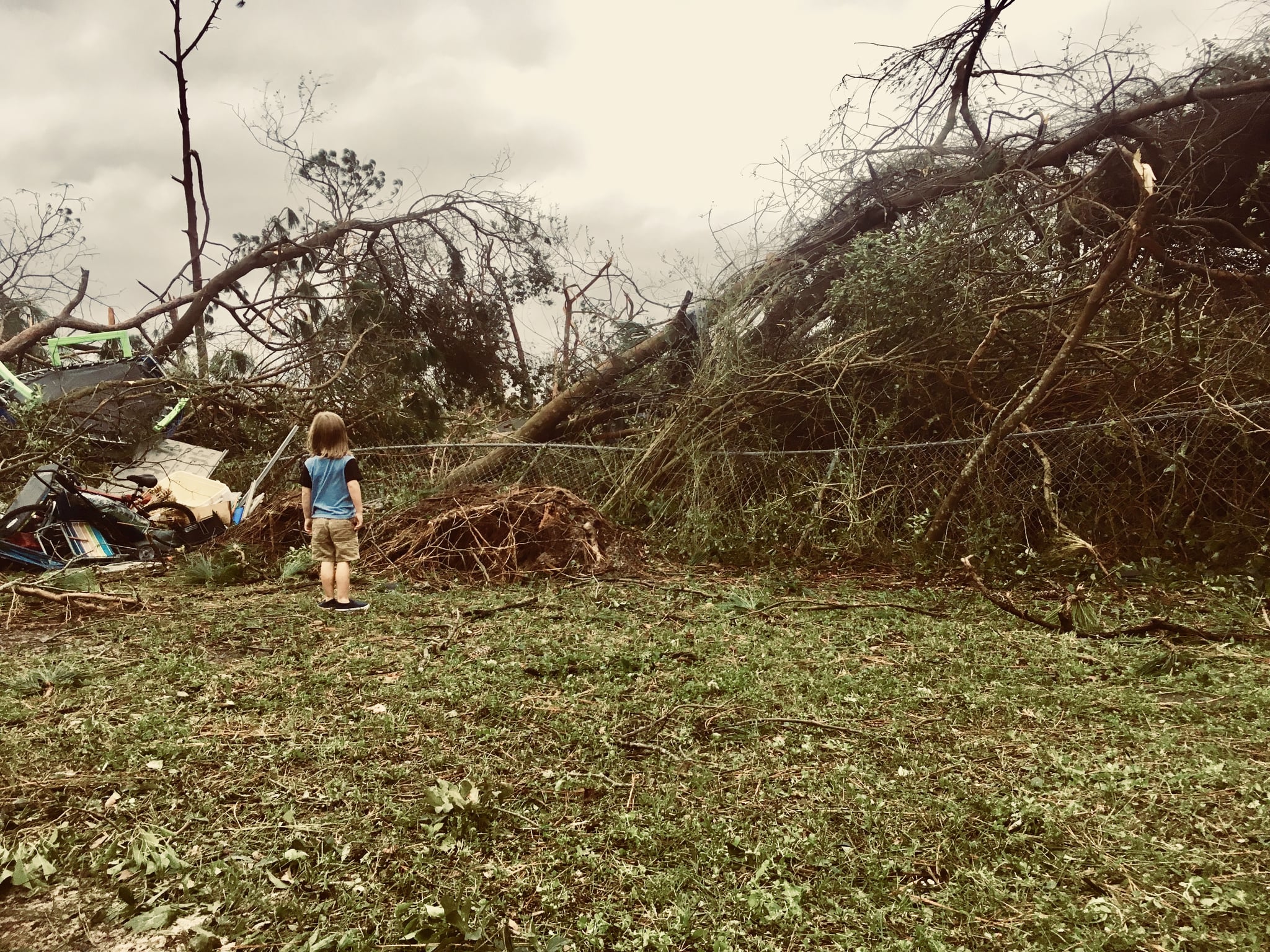 Overnight, our town was transformed into a weather-beaten war zone. The first week of living in post-Michael conditions felt like living in apocalyptic times. I expected zombies to appear at any moment.

Overnight, our town was transformed into a weather-beaten war zone.

We had no running water, meaning we couldn't flush the toilets. We couldn't wash our hands, either; we had to ration the bottled water we had left for other things — like drinking. After the storm, we moved to my parents' house, where there is a pool. We often rinsed our hands in the black, murky, possibly snake-infested pool water, and then we used hand sanitizer to kill the germs. We obviously had no power, and no power means no air conditioning in 100-degree Florida weather. It also meant no street lights, no home lights, no refrigerators, and no way to charge our cell phones. Not that cell phones were of much use: more than 60 percent of all Bay County residents were left with zero wireless service. We had no way of contacting one another to see who was OK and instead drove around looking for loved ones. But driving around was dangerous, and there was no gas to refill the tank, so we couldn't drive far. If you were lucky enough to have a generator, you didn't have enough gas to run the thing. There was zero access to health care: our hospitals and clinics were demolished, and nurses and doctors were trapped inside their own homes.

But perhaps the scariest part of living in a city that is smashed to hell is the looters. A high percentage of homes were highly exposed to looters because they had no roofs and broken windows. There weren't enough authorities to guard every single street, so individuals had to take matters into their own hands, posting signs like "You loot, I shoot" or "weapon strong." One woman had her purse stolen right from her hands when looters trespassed into her home. So many cars were smashed by trees that people were forced to walk around instead of drive, adding to their vulnerability.

For every five people I know, four have lost their homes.

My husband, my son, and I stuck it out for a week, but we finally decided that we'd had enough. We also needed to get my son to a doctor. The day of the storm, he'd developed a nasty cough that was quickly getting worse. We drove five hours to Jacksonville to get him some medicine and to stay with some friends, hoping to return when things calmed down. Driving out of the wreckage and back into society felt perplexing. One-hundred miles up the road, they had cell service, flushing toilets, functioning restaurants, and gas. In Panama City, we were fighting to survive, while the rest of the world was back to business as usual. We tried to enjoy our time away, but we started to feel like we'd deserted our home. So on day six, we made our way back.

Upon our return, I'm not sure what I expected to see, but somehow leaving the mess and then returning made the reality of the situation truly sink in. Tears trickled down my face as we drove back onto the once-familiar streets that were now unrecognizable. Massive 100-year-old oak trees that once provided so many homes and parks with natural shade were blown to smithereens, their extensive six-foot-wide roots lifted from the earth, disintegrating entire yards. The 50- to 80-foot pine trees that populated every street and every yard were snapped in half, piled into colossal mounds that were so high, they blocked entire homes. Almost every roof carried a new shade of blue: tarps were their only barrier to block any potential rain. 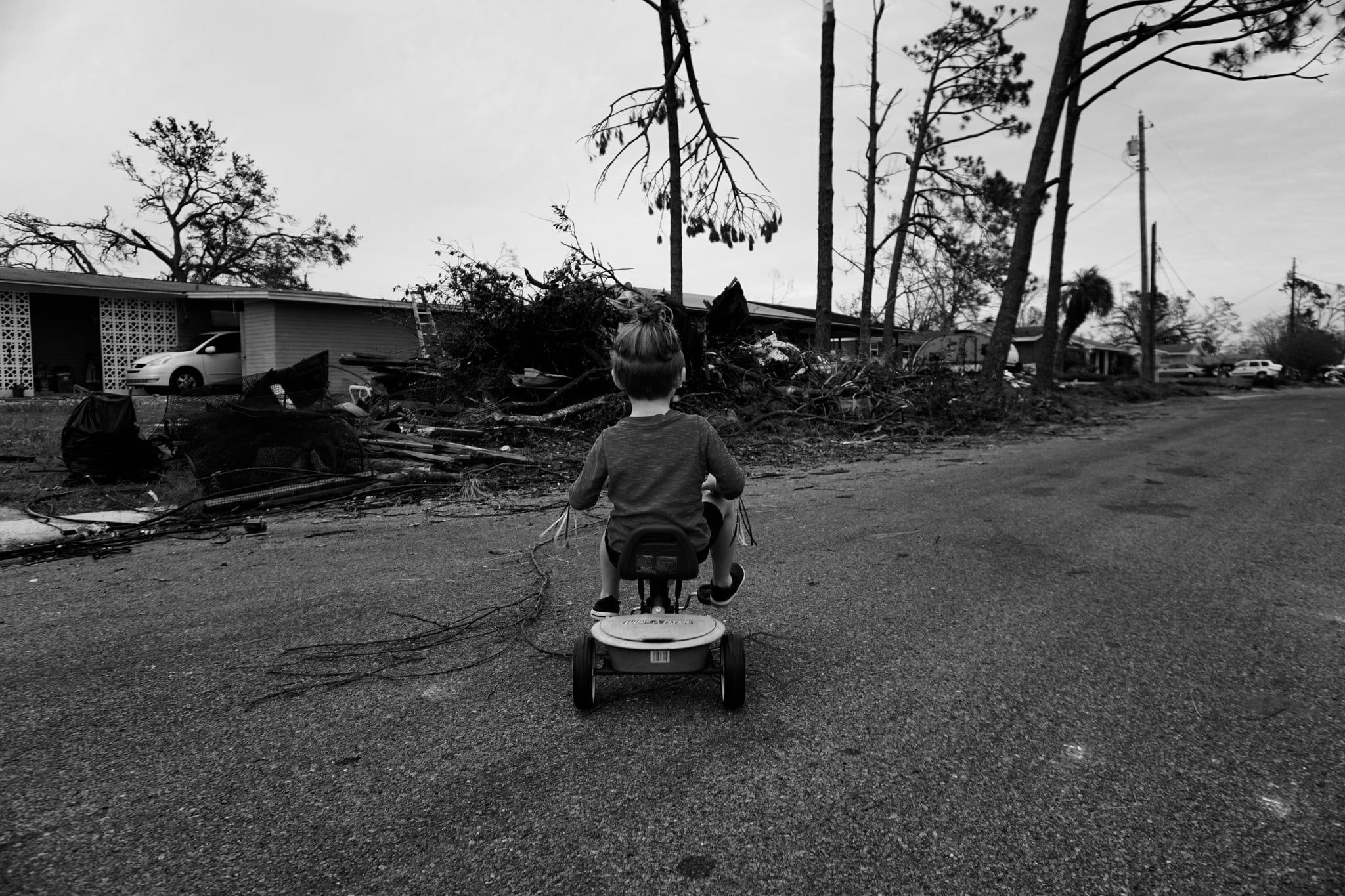 It's been 29 days since Hurricane Michael, and our city is still in shambles. We are eternally grateful to all the linemen who came from all over the country. They restored our power in record time, and because of them, we are able to begin to put the pieces back together. As of now, 98 percent of our county has power and water, but the restoration of power doesn't mean our thriving community has been restored. We have some businesses reopening, but the ratio of open to closed is 1:10. A few grocery stores made it through, but the restaurants are few and far between. Our hospitals are only partially opened, and a massive amount of our clinics were wiped out. Countless doctors, lawyers, and teachers are twiddling their thumbs because they have no place to work. For every five people I know, four have lost their homes. They're either staying with family or have relocated to neighboring counties. Many of our schools are still being used as shelters, because there is no place for the homeless to go. When I use the word "homeless," I'm referring to the people who recently became homeless because of the hurricane.

But I am happy to say that aside from all the destruction, there is a light that shines bright. The old saying applies that when the going gets tough, the tough get going. I've never felt so proud to be a Bay County resident. We have pulled ourselves out of the rubble and, somehow, through all of the mess, managed to hold our heads high. Our community has become a team, and everyone is adopting terms like #850strong and #wewillrebuild. Because we know that Hurricane Michael is not the end of Bay County, it's a new beginning.

Barack Obama
Obama Applauds Joe Biden For Picking Kamala Harris as His VP: "This Is a Good Day"
by Yerin Kim 1 day ago

Politics
Joe Biden Announces Kamala Harris as His Running Mate, Calls Her a "Fearless Fighter"
by Karenna Meredith 1 day ago