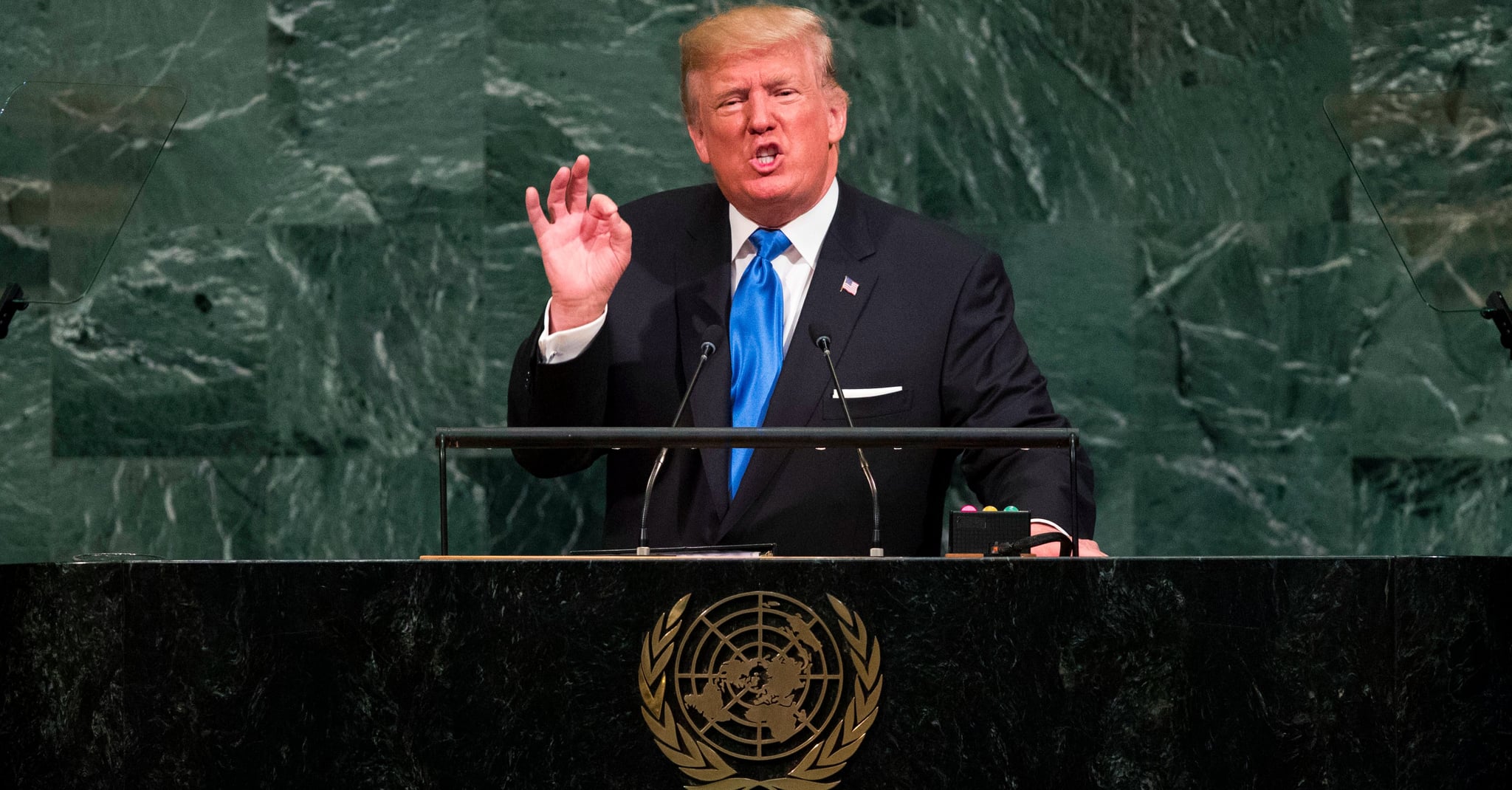 On Friday and Saturday, Donald Trump lashed out at two notable sports stars who have been critical of him: Colin Kaepernick and Stephen Curry. It started on Friday night, Sept. 22, when President Trump called out NFL players like Colin Kaepernick who protest racial injustice and police brutality in America by taking a knee during the national anthem. "Wouldn't you love to see one of these NFL owners — when somebody disrespects our flag — to say, 'Get that son of a b*tch off the field right now. Out. He's fired. He's fired!'" Trump shouted.

... trump taking a veiled shot at colin kaepernick, says owner should say: "get that sonofabitch off the field right now... he's fired!!" pic.twitter.com/ttbOd0VrPG

Trump was speaking at a campaign rally in Huntsville, AL, for Republican Luther Strange, who's running for senator in the state. Trump's comments were quickly met with condemnation not only across social media, but also in a statement from NFL Commissioner Roger Goodell, who called the president's rhetoric "divisive."

"The NFL and our players are at our best when we help create a sense of unity in our country and our culture. There is no better example than the amazing response from our clubs and players to the terrible natural disasters we've experienced over the last month," Goodell wrote. "Divisive comments like these demonstrate an unfortunate lack of respect for the NFL, our great game and all of our players, and a failure to understand the overwhelming force for good our clubs and players represent in our communities."

Twitter users also reacted with a poignant response, using the hashtag #TakeAKnee, but the one person who had the best comeback was Colin Kaepernick's mother, Teresa. After Trump's statement, the proud mom tweeted, "Guess that makes me a proud b*tch!"

Guess that makes me a proud bitch!

Her tweet has since racked up over 13,000 retweets and over 45,000 "likes" as of press time. Keep reading to see how others on the internet responded to Trump's NFL rant ahead.

Related:
In 2 Sentences, President Obama Nails Why Everyone Should Appreciate Colin Kaepernick's Protest

We’re not on the plantation anymore Chump. There will be no “buck breaking” out here. Fingers on the hand form a fist. #TakeAKnee ‘til free.

We support your FIRST Amendment right to protest.

So many hot takes that Kaep doesn't have a job because he isn't good enough from people who elected an unqualified reality star. #TakeAKnee

If you're more upset about Kaepernick's protest than u are about police brutality, you should probably reread the Constitution. #TakeAKnee

Don't allow racists to reframe #TakeAKnee as being a debate about anthem & flag. It's a protest of police brutality & racism... 🙄

Trump appeared to obsess about the topic the following morning by then going after NBA star Steph Curry, who has said he'd decline an invitation to Trump's White House:

Going to the White House is considered a great honor for a championship team.Stephen Curry is hesitating,therefore invitation is withdrawn!

Among the notable responders to that tweet? LeBron James, who called Trump a "bum" for twisting the truth of the scenario.

U bum @StephenCurry30 already said he ain't going! So therefore ain't no invite. Going to White House was a great honor until you showed up!

As of press time, James's tweet had racked up 111,500 retweets. Trump's had less than half as many.

Donald Trump
Greta Thunberg Trolled Trump Again . . . and as He Was Leaving the White House, No Less
by Kelsey Garcia 1 week ago

Donald Trump
Who Recognizes Nancy Pelosi's Dress at Trump's Impeachment Vote From the First Time Around?
by Chanel Vargas 2 weeks ago