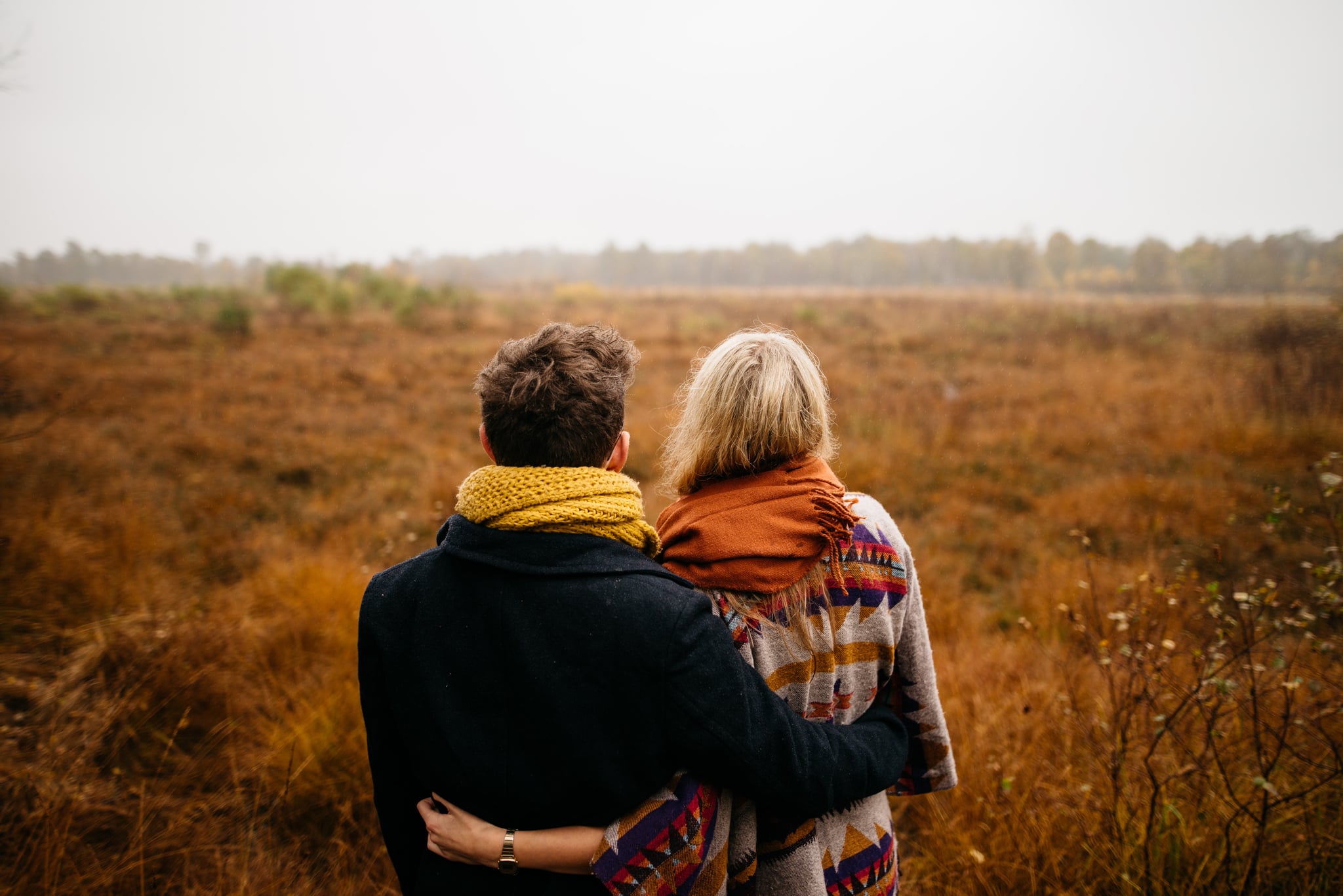 Sara and Ben (names have been changed) are a happily married, millennial couple in an open relationship. We reached out to Sara to share some insight into their journey to polyamory, the ground rules they've set, and what it's like to date other people — and maybe even fall in love with other people — when you're already married to someone you love.

How long have you been with your husband?

We've been together for nine years. We met on our first day of college — I was determined to break out of my nerdy shell and sit next to the cutest person in the room. I was really drawn to Ben. He ended up being super quiet and thus I was convinced that he hated me, but in actuality he was just nervous (and a soft-spoken person). We became friends, and the rest is history.

When did you decide to have an open relationship?

We started talking about being monogamish (which later evolved into full-blown polyamory, haha) about two years into our relationship. Seven years ago.

Who initiated it? How did the conversation go?

Ben is an open-minded person who has never been a big believer in social constructions or tradition. I am a bit more of a rule follower, but definitely liberal and nonjudgmental. He brought up the idea of him being comfortable with me casually dating other people early on in our relationship. He knew that he was my first boyfriend (I was 18), and he didn't want me to feel like I was missing out on dating. We talked about nonmonogamy in theory for a long time (two years?) before ever acting on it. In hindsight, I feel like this gave me time to get used to the idea and for us to build a solid foundation. One of my biggest takeaways from our relationship (and from hearing about other couple's open relationships) is that a successful nonmongamous relationship centers on honest communication and a strong connection between the couple.

Related:
My Open Relationship Was a Great Decision but, Damn, It's Boring

How would you describe your relationship?

Our relationship has evolved over time, but the constant has been how close we are with one another. We've been consistently super happy together for almost a decade! The other constant is that since becoming "monogamish" (and eventually, "poly"), we've always dated separately.

At first, we were monogamous (I was 18 and didn't know much about any other relationship structures). Ben mentioned that he would be comfortable with me casually dating other people early on in our relationship, and it was then something we talked about every once in a while for a few years. These conversations were happy and exploratory. When we graduated college (and moved in together), I met someone who I could see myself dating. Ben was comfortable with me exploring it, and I casually went on a few dates. From there, we talked about opening the relationship on his end as well, and I was surprised by how nonjealous I felt. We took it really slow (lots and lots of conversation) and occasionally dated outside of our relationship. As time went on, the "casual" piece has become less and less important. I dated someone for over a year, and the consistency (and depth) was really nice. Ben was fully supportive — in fact, he prefers when I date someone longer term, because he trusts that I'm safe (dating new people can feel scary — you never know who might be a creep!). He has been seeing two women for about eight months, and again I am surprised by how normal it feels.

Logistically, we tend to see the other people we're dating (if we're dating other people) about once a week. I have an incredibly busy career (whereas Ben's is more mellow), so he might go on two dates a week (almost always during times when I am busy anyways). I am super picky and not always seeing someone, but when I am, I like to see them once a week. In the past I have spent the night at a boyfriend's house, but Ben has not spent the night anywhere.

Do you ever get jealous? Does he?

Making the other person feel valued and primary is extremely important to Ben and me. This really helps minimize jealousy. We spend most of our free time together and try to be intentional about the quality of that time (e.g. putting our phones away and actually connecting). We've both acknowledged that if our foundation wasn't strong, we would probably feel more jealousy.

We shared a big laugh when we realized just how weird/unusual it is for a husband to comfort his wife about her breakup with a boyfriend.

Do you have ground rules? If so, what are they?

The biggest rule is communication — we try hard to balance respect for our other partners' privacy with open communication between the two of us. We are also always honest with the people we are dating. Everyone knows right off the bat that we are happily married, and thus not looking for a lifelong commitment. We also feel strongly about treating the people we date with respect and care (and expect to be treated the same). It makes me really happy (but also disappointed) that several of the women Ben has dated have said that he is the kindest, most respectful man they've been with.

This isn't a rule but more of a practice: we have not met one another's partners in the past. This might also help minimize jealousy. Not meeting one another's partners also allows each of us to have an identity outside of our marriage, which is nice. However, we're both open to meeting someone the other person is dating if they felt strongly about it.

Another big (and hopefully obvious) rule is condoms. We believe in safe sex for everyone, not just open couples!

Have you fallen in love with someone you've dated?

Yes — I've been in love with one other person. It was not the same as the deep love I feel for Ben, but it was fun and meaningful. Ben didn't feel threatened and was an amazing source of support when we eventually broke up. We shared a big laugh when we realized just how weird/unusual it is for a husband to comfort his wife about her breakup with a boyfriend. Ben hasn't fallen in love with anyone (he is a private person, and the women he is dating are not looking for serious relationships). If he did fall in love, I don't think it would bother me. We both feel strongly that our relationships with other people don't take away from how we feel about each other.

Related:
How Sleeping With Other People Makes Me Love Being Married

Do your friends or family know?

My sister (who is also my best friend) and her husband know, which is extremely helpful. Finally telling them was a massive relief. I felt like I was living a double life for a while there, which I hated. We've also told a few close friends, all of whom have been awesome and supportive. The idea of telling our parents makes us both want to poop our pants, and thus will never happen (nor does it need to). I'm not particularly close with the rest of my family, so there is really no need to tell them.

This past year, we've been trying to tell new friends early on, because it is much less awkward. This has been a great strategy! We tend to attract open-minded people into our lives, so no one has had a terrible response thus far.

What type of guys do you go for? Are they similar or different than your husband?

I tend to be attracted to older men, which is different from Ben (he is only a couple of months older than I am). My long-term boyfriend was hilariously similar to Ben in some ways (both surfers, they liked similar bands and movies, similar styles of dress, etc.).

What type of women does your husband go for? Are they similar to you or different?

Ben tends to go for women who are a bit more free-spirited than I am — which is fine by me! He can go camping with them while I enjoy the comfort of a real bed. The women he dates do tend to be intellectual like I am. They sound like awesome people who I could easily be friends with.

How has this arrangement helped your relationship?

I am 100 percent convinced that being in an open relationship has made our relationship better. We've honestly become closer through sharing our dating experiences with one another. We've always had an awesome sex life, and it's fun to be able to have sexual experiences outside of the relationship (it takes a lot of pressure for us to be all things for the other person).

Do you have kids or plan on having kids? How will this affect your decision to have an open relationship?

We're unsure about kids but would probably be monogamous during the baby phase (only because of time constraints). Our biggest commitment to one another is to keep talking honestly and continually reevaluating the structure of our relationship. Originally we weren't sure if we were going to be nonmonogamous for 10 minutes, or 10 years. It's all about making sure we're both happy. We're so grateful to have found one another and joke that we're two little aliens in love. We don't know if our relationship will always be open, but we do feel strongly that we'll be together.

Netflix
Why Are All the Men on Emily in Paris Toxic?
by Samantha Bergeson 1 week ago

Relationships
Yes, It Is Possible to Feel Lonely Even When in a Committed Relationship
by Ashley Ortiz 3 weeks ago