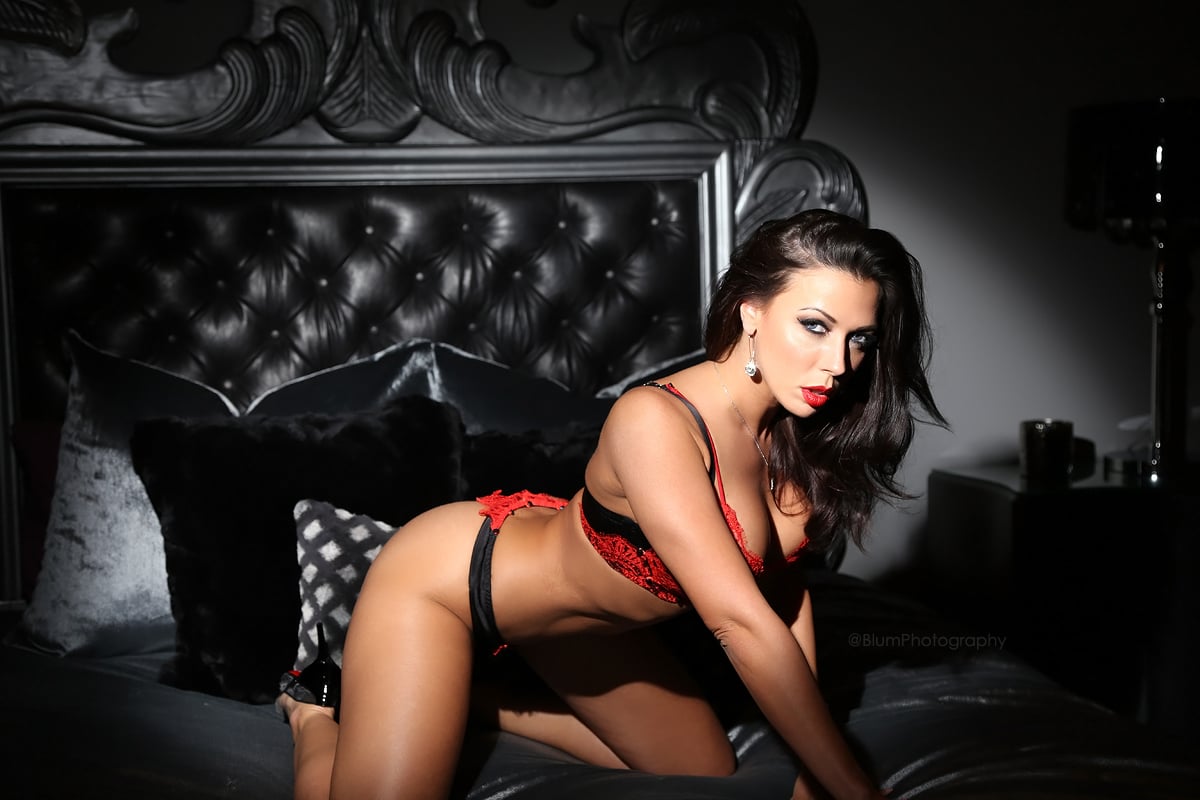 By looking at the bare-faced woman smiling back at me from her screen, I would have never guessed that adult film star was her occupation. With nothing but mascara and a natural glow from kickboxing class in terms of makeup, Rachel Starr was nearly unrecognizable as we Skyped.

"We're real people," Rachel told POPSUGAR. "I don't think people do it on purpose at all, I think they accidentally objectify us in a way because it's like we're this character on TV that's constantly playing this ongoing role. It's not even like Angelina Jolie because her personality ranges from so many different scopes throughout all of her movies. But usually, as Rachel Starr, I'm playing pretty much the same character with a different story line every single time. So people can, I think, subconsciously go 'Oh, well, that's her. That's just how she is.'"

But in reality, Rachel is a family person, a girlfriend, an animal-lover, and a coach off screen. She provides women all over the world with career, moral, and emotional support via private Facebook groups.

"I'm just so grateful for that because, as a woman, I feel that in the past, for so many years, we've felt like we can't talk about it," Rachel said. "And the fact that more and more women are becoming comfortable and more and more women are reading the articles and sharing it with their girlfriends, or blatantly just being more open, it makes me so happy that that's going on. More than anything, I'm just so happy for women as a whole. They're coming together in this: 'We want to know more, we want to talk about it.'"

Related:
A Former Playboy Bunny Shares 8 Secrets About the Job That Will Surprise You

"I think the most common thing that goes on behind scenes is the extensive documentation," Rachel told us. "Constant paperwork, checking people's tests, model releases — even down to the point where not only do we have to sign stuff, but they have to video us agreeing to these certain terms that you realize this is going on an adult site, you realize that you're working with so-and-so, and you realize that he tested on such and such date, so that means he's all negative for these things and these. You have all these checkpoints that you have to go through before you can even get in. And so it's very corporate, and I think maybe a lot of people might have the idea that it's, 'Hey, we show up on set. Let's have sex [laughs].' It's so regulated, and I think that's one of the things people wouldn't expect."

2. On-set fluffers are a myth.

"There are no fluffers," Rachel laughed. "You are completely responsible as the talent yourself to put not only your body but also your mind in a frame of work to work and to execute what those directors hired you to do; it's nobody else's responsibility. So even though I'm working with a guy, it is not my responsibility to make sure that he's hard. When that camera's on, you should be hard and ready to rock. There's nobody waiting on their hands and knees to be like, 'What do you need, honey?'"

"Me, I'm smiling, laughing the whole time or whatnot," she said. "I like to cut jokes and stuff like that, but there are some girls that I've worked with that are really serious. They want to know their lines, their script, to a T, so they literally put on earphones. They don't want to hear anything. They don't want to talk to anybody. They just want to know their lines. I remember my first year getting into the business, and I don't even remember this girl's name. I remember that she was beautiful, and I was a little bit kind of like, 'Whoa. This has to be a big deal.' She had headphones in, and she was like, "Nobody talk to me," and I just wanted to go up and introduce myself. And literally she moved it, and she was like, 'You see the headphones on, right [laughs]?" And I was like, 'This scene's going to go well.' But actually, when the scene started, I mean when she flipped her switch — she turned it on. You would never know."

Rachel typically knows who she'll be working with in a project as early as two weeks or a month ahead, which means she has input on who she wants to film with or doesn't. Think of it as an internal blacklist for every individual.

"If there's anybody that we work with or even somebody that we haven't worked with we just heard things about or whatever, we can put that person on a discreet no-list, and only the director has that info," she said. "The other talent doesn't even know they could be on my no-list, which is pretty cool. You don't ever run into having to work with people that you don't want to work with."

5. It's more than just about the sex.

"I would say the best part of the job is embracing the fantasy," Rachel said. "They're not necessarily my fantasies, but the companies put a lot of effort and thought into the scripts that they write. You just kind of get to be somebody different for a day, and that's kind of cool. You get to live out these fantasies. Like I said, that maybe aren't necessarily yours, but it's kind of cool to think 'whoa, that would actually be hot at that moment in your life.' I know it's sexually artistic, but it is a form of artistic expression."

If you've ever washed your face with Cetaphil daily facial cleanser and thought, Huh. This looks like semen, you're not far off. Approximately three quarters of the "adult facials" shown in pictures is not real semen, it's usually Cetaphil. As of recently, companies have also started to use a brand of lube called Spunk, which is supposed to appear exactly what like its name suggests. But things are more authentic as far as video goes.

7. Set conditions can be pretty rough.

It's not all glitz and glamour on set. In fact, Rachel shared times when filming was almost unbearable. "There are painful days where you're in the middle of the Mojave Desert and it's 110 degrees, and you're pouring in sweat. And in the video, you can't have a drop of sweat on you, so people are constantly toweling you down. Or just when it's cold because when you're shooting, and this is another crazy thing that most people probably don't think of, there's a professional microphone, a "boom" is what we call it. It is so strong, it can pick up when the AC or the heater turns on and off. So it could be the dead of Winter and it's freezing cold outside, and we can't have the heater on. And it takes hours to shoot one of these things."

Rachel's own boyfriend of about two and a half years is not involved in her professional world whatsoever. And though her line of work inevitably has some sort of effect on their relationship, he's incredibly understanding about what she does. "I'm just really lucky because I have a boyfriend that realizes that in business it's objective, it's not personal," she said. "And so it was easy for him to understand that this is my job."

If any issues arise, the two are great about open communication. "If something kind of hits him like a thorn in the side, he just says, 'Hey, look, I just want to ask you about this. What's the answer?' And then, just having complete honesty and just answering back, nine times out of 10, the conversation is done and over. But I mean, it's hard being away from him, and that part always sucks."

"Me personally, I prefer to not date within the industry," she said. "But I think what keeps my soul complete, my chi, I guess for lack of a better word, is to be able to separate the two. When I go to work, I'm work, and I am everything that my brand needs me to be. And when I come home, I'm everything that my family and friends need me to be."

As a 10-year veteran, Rachel averages between 20 and 30 films annually, but her numbers are definitely on the lower end. Most people are still in the process of building their brand and film upwards of 60 to 70 films per year. To really get their name out there, some even film 100 to 150. But in addition to films, the job also requires touring and appearances to maintain their personal brands.

10. Some adult films can take days at a time to shoot.

Rachel distinguished the difference between "gonzo" films (short storylines) and feature films. Because gonzos are only about 10 minutes in duration, they only take a full day to shoot, whereas feature films are more like a movie and require several days of production complete with built sets and costumes. They require longer scripts and more of a developed plot compared to a gonzo.

11. Some of the orgasms you see are real.

"I'd like to say that most of the orgasms I've had on set are genuine," Rachel said. "I'd like to say that, but realistically, it's not fair for me to say that because a lot of times in a script — and this is where I think people don't realize how scripted it is — it will say, 'We need four minutes of doggy and then we need five minutes of her in cowgirl. And if she could have a heightened experience in the fourth minute of that five minutes, that would be great.' That's not really how orgasms work [laughs]."

Sex
I Lost My Mom 2 Years Ago, and My Grief Killed My Sex Drive
by Adele Stewart 1 day ago

Netflix
365 Days Is Popular on Netflix, but Its Horribly Abusive Relationship Should Not Be Celebrated
by Hedy Phillips 2 weeks ago

Relationships
I Don't Want to Have Sex During Social Distancing, and It's Hurting My Marriage
by Anonymous 5/15

Love
5 Ways to Give Yourself the Love You Deserve During Social Distancing
by Maria G. Valdez 4/24

by Kate Schweitzer 2 minutes ago

by Brea Cubit 27 minutes ago