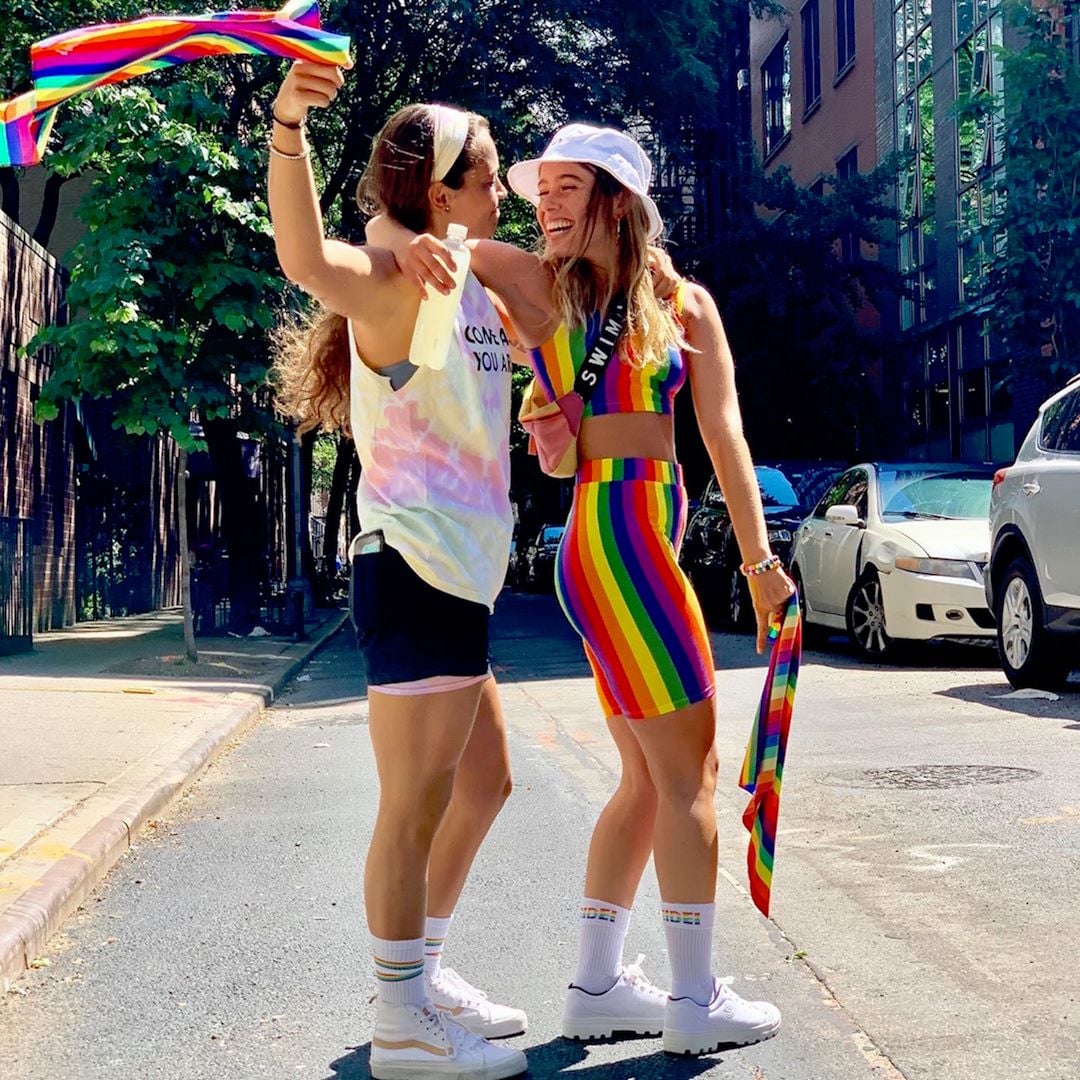 When my sister told me that she's gay, I felt like someone had punched me in the gut, and I immediately started crying. It wasn't because I was anxious about the hate or judgment she might have to endure now that she was out. It wasn't because we had conservative or extremely religious people in our family who wouldn't approve — in fact, everyone we know and surround ourselves with is very liberal. It wasn't even because of the way she told me — in a long, nervous text message where she apologized for telling our parents and her best friend before she told me. It was because, when she told me, I immediately backtracked through Rachel's life, realizing that her struggles with anxiety and depression must have been, in part, due to the fact that she had been hiding who she really was.

I immediately remembered the year Rachel slowly started to disconnect from the world. She was in sixth grade. First, she swore off sleepovers and play dates with friends. Then as she got older, it was softball (her one true passion at the time) and school. Rachel wouldn't even come out of her room when she was experiencing social anxiety.

Back then, Rachel, like the rest of us, had already seen what our society's idea of a family was — a man and woman fall in love, get married, and have children. And after she came out, I wondered if she felt like she was different, wrong, or, worse, a bad person, because she didn't feel like that idea of a family was right. I wanted to go back in time and erase what the world had told her. I wanted to let her know that it was OK to feel love and attraction the way she wanted to.

My heart felt like it needed to hurt for all those years Rachel felt like she couldn't be herself; just like hers had hurt when she realized she was part of a minority, or what was not — and still isn't — considered "normal."

I still remember the day I came home to find a new decoration in Rachel's room: big, block letters cut from black construction paper taped onto her mint green walls that read, "THIS IS WHO I AM. NOBODY SAID U HAD TO LIKE IT." The rest of her room was covered with Miley Cyrus and Hannah Montana posters and stickers (just a few months ago, Rachel told me that Miley Cyrus was absolutely her first crush). And that message has always been true for my sister. During high school, while the rest of her friends did their makeup and hair before school, Rachel stuck to her casual wardrobe of hoodies and sport shorts. She was always comfortable with her style, no matter how different it may have been from her peers.

I suffered from anxiety growing up (it runs in our family), and I cared tremendously about what other people thought of me and the way that I looked. That's why Rachel became my role model early on. While she may have been wrestling with her feelings on the inside, she always seemed so comfortable and confident on the outside. And it hurt to see my role model sad. I don't remember ever feeling worse than the moment I looked into Rachel's eyes and knew she didn't feel "right." Her smile was not a "real" smile, and that didn't feel like anxiety; it felt like torture.

Related:
Queer and Now: A Conversation Between LGBTQ+ People From Ages 24 to 70

It took a few years for Rachel to start experimenting with girls. She realized within the first few months of college that being intimate with a guy just didn't feel right. She didn't tell my parents she was dating anyone at first, but she started seeing a girl from high school and lied about who she was with one day. When my parents couldn't get in touch with her, they called the friend she was supposed to be with, who confirmed she hadn't talked to Rachel in days. So when Rachel came home after her date, she told my parents the truth.

Rachel told me she wanted to come out to me first, but it just didn't work out that way. And when she told her best friend Mary, her response was perfect: "So? I like boys." To this day, I still wish I had responded to Rachel that way. But I'm an emotional person, and my heart felt like it needed to hurt for all those years Rachel felt like she couldn't be herself; just like hers had hurt when she realized she was part of a minority, or what was not — and still isn't — considered "normal."

By the end of the day that Rachel came out to me, my broken heart was quickly replaced with a huge smile, because I was so happy Rachel was happy. I felt that same way when I recently watched her at her first NYC pride parade, proudly kissing her girlfriend, Megan, in the street. There was nothing fake about that smile. In fact, every day that Rachel wakes up proud of who she is, that picture of her sad smile fades a little bit more from my mind. 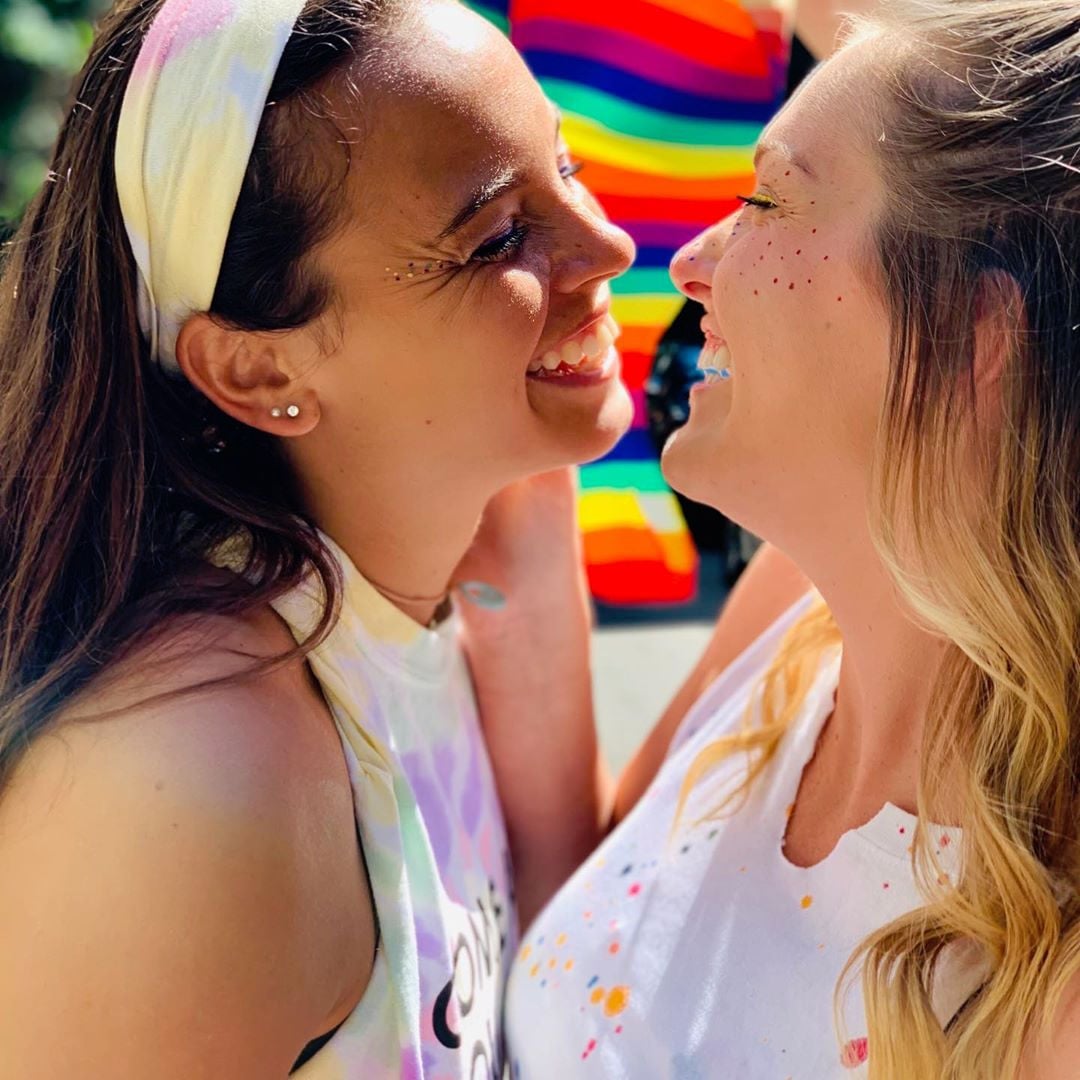 I can only tell this story from one perspective. I'm sure that people who have any family members who identify as LGBTQIA+ have different experiences that I may or may not be able to relate to. All I know is that having a sister who is gay isn't hard for me and never has been, but I imagine that it can be hard, at times, to be part of a minority. So I stand with Rachel, and I always will. The day she was born, I became a sister. That's just a fact. But loving and understanding and accepting my sister for being exactly who she is? Those are my choices.

Rachel and I always talk about romantic love and how, even though she shares hers with a woman and I share mine with a man, it doesn't even compare to the love we share as sisters. It's the kind of bond I feel so lucky to have. Having a sister I love is and always has been the most important thing in the world. So how does it feel to have a sister I love who is gay? Zero change. It's still just that — the most important thing in the world.

Tweens and Teens
These Parents Had a Gender Reveal For Their Transgender Daughter, and the Photos Are Stunning
by Murphy Moroney 3 hours ago