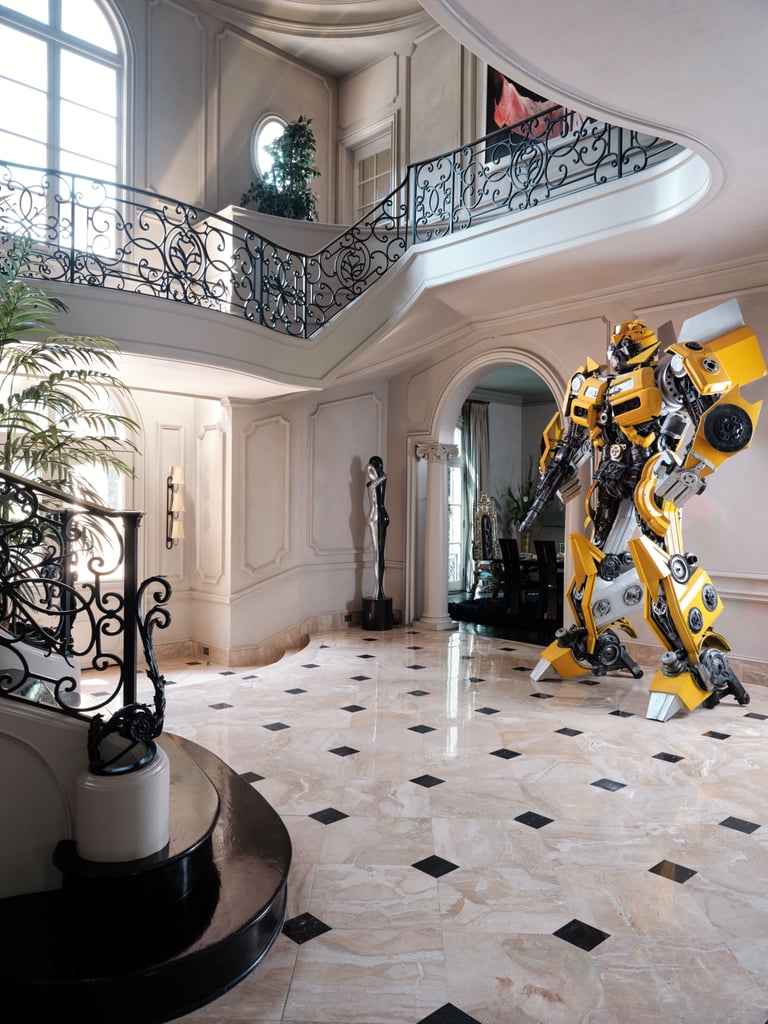 Tyrese Gibson doesn't mind bringing his work home with him. In a recent interview with Architectural Digest, the F9 and Transformers star gave a tour of his Atlanta home, sharing a glimpse at everything from the gold curtains bracketing his floor-to-ceiling windows to the 16-foot-tall Transformers hanging out around his home — yes, including Bumblebee. The 25,000-square-foot French chateau-style mansion, designed by Sue Wishengrad, features seven bedrooms and every luxe home-decor item you could imagine: shag carpets, golden chandeliers, engraved crown molding, and a roaring fireplace adorned with modern art. "He said, 'Mona, I need you to make some magic happen,'" designer Mona Stephen told AD, and she absolutely did.

"As I pull up to my house every day, I am literally in disbelief that it's mine."

Growing up, Tyrese admired the mansions he saw on Lifestyles of the Rich and Famous, in disbelief that such ornate homes could belong to people. "I grew up in poverty, with every form of public aid, while my mom worked multiple jobs and raised four kids on her own," the five-time Grammy nominated singer said. "My first instinct was like, I can't believe human beings can actually own Rolls-Royces and castles! But eventually that TV show gave me the audacity to believe that it was possible to have these things, to break the cycle of poverty."

According to Sue, the house took two months to decorate, which included unloading three semi trucks filled with handpicked furniture, making Tyrese's dream home a reality. "I wanted guests to feel the regal energy, the regal vibe. But it's very livable," he said of the six-story house. "No one comes into my house and, I'm like, 'I'm sorry, you can't sit here' . . . As I pull up to my house every day, I am literally in disbelief that it's mine. People come over and they don't want to leave. This place has been a gift that keeps on giving . . . and I will never, ever let it go." Take a closer look at some of the most stunning parts of Tyrese's house — including an outdoor theater, indoor theater, lush garden with a pool, and a recording studio — here.

Naomi Campbell
See Inside New Mom Naomi Campbell's Home in Kenya, Complete With a Pool in the Living Room
by Lauren Harano 5/19

by Hannah Weil McKinley 23 hours ago