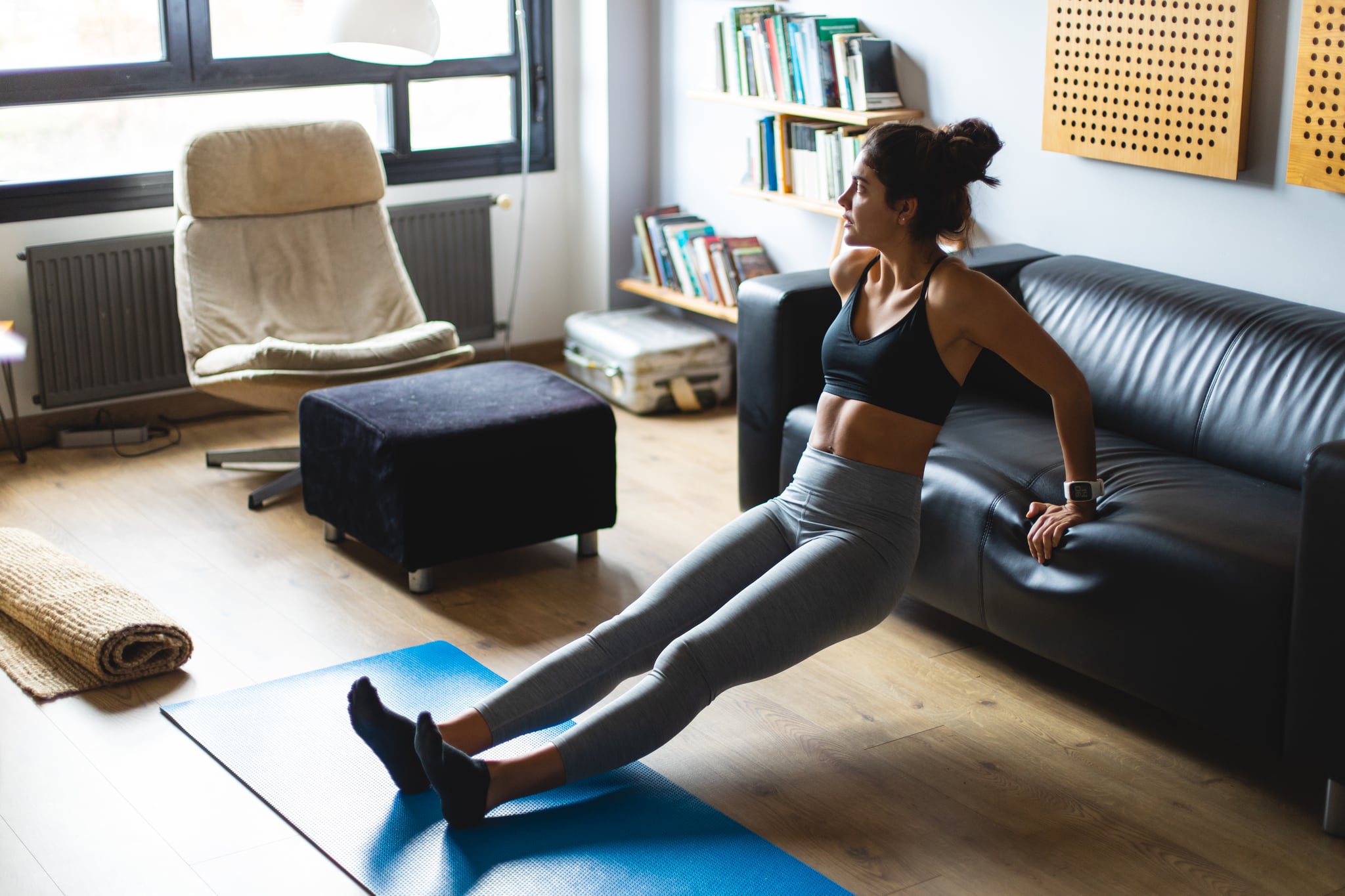 Every weeknight at 7 p.m., I'm committed to an at-home workout consisting of functional training using mostly my own bodyweight. I plank, I crunch, I run in place, and I do it all again — but it wasn't always this way. In fact, if my 8-year-old self were to see it, she would hardly believe it, and my high school self, who almost failed P.E., who never got the ball over the volleyball net? Let's just say the joy I feel when working out now would have been completely foreign then.

When I was young, my mom put me in all kinds of dance classes: ballet, jazz, even flamenco. With my constant tripping over everything, my parents figured dancing would improve coordination (spoiler alert: it did not improve my coordination) and was a safer alternative to putting me in the middle of a soccer field with flying objects. The reality of the situation? Let's just say I preferred to march to the beat of my own drum, or at least that's what I like to say now. Always just a little bit off beat and forever forgetting all of the pesky movements, coordinated dances were just never my thing. In a sense, dance was a step into athleticism that ended up pulling me further away from it, creating an image in my head of "Camila the Clumsy."

While the whole dance debacles went on (which, although messy, were also really fun but mostly because of the friends and costumes), there was a much greater foe in the picture, one that would turn into my nemesis. Its name? Aptly, physical-education class. A place where I would be forced to brace the elements: tropical rain, sweltering 100-plus-degree Miami heat, and, yes, some cold (at least way too chilly for shorts and a T-shirt) in the winter that made me wish I was just home on my computer playing The Sims. (A nerd? Me? I would never.) Against the powerful, natural elements, I was a skinny, awkward (endearing?) leaf blowing in the wind, and I accepted that. Who didn't accept that? Maybe just a few P.E. teachers, who, in all honesty, really did try their best.

Running the mile was a day of the year that I dreaded more than anything else. Thanks to an unexpectedly competitive streak, I would force myself to run as fast as I could, when I had probably run a mile in total throughout the entire rest of the year. I wouldn't permit myself to walk, even though I felt like my entire body was collapsing, especially with the debilitating humidity and heat. By the end of it, after actually finishing somewhat quickly, I would retreat to a corner somewhere under a pavilion, tightly clutch my belly, and hide for a while until I could recover.

Even more, P.E.'s incessant burpees always ended with me physically not being able to continue, hands burning on the navy basketball court, and a teacher blowing the whistle at me, telling the class we had to do 10 more just because I'd stopped (my classmates loved me). And as mentioned before, I never got the ball over the volleyball net (once, the wind almost blew it in my favor, but it just missed going over by a hair). From a young child with two left feet to feeling pretty inadequate in any P.E. class I ever took, it was safe to say I staunchly took on the identity of nonathletic. And that was that.

But then there were the moments when no one was looking, or at least when no one would judge me. When I would race my dad in the pool at sunset when I was 12, having so much fun I never wanted to leave, swimming faster each time. Or playing cops and robbers in my neighborhood with my friends, running so quickly away from opponents, I would almost disappear in the night. Dancing in my room, making up moves as I went along, stretching my arms out wide, feeling the entire world in my palms. In moments like these, I realize now, I trusted my body enough to move the way it wanted to, and when left to its own devices, it could do some pretty awesome things.

Flash forward a few years, and I began to understand that I didn't have to dread exercise or label myself as not being able to do sports. It was about feeling grateful to be able to move my body in certain ways and deriving joy from nurturing my body with movement. It wasn't about taking away from my body, either by sweat, calories, or a mix of both, but by adding to it. Today, I exercise every night, in my workout corner, at exactly the same time, breathing into plank workouts and feeling my back and abdominal muscles strengthen. I squat and do arm curls, lunge and do sit-ups, and I look forward to improvement, but I don't force it either. In my sacred space, I'm just happy to feel my energy flow. And sure, I use tools like weights and resistance bands, but here, the most important tools of all are gratitude and self-love.