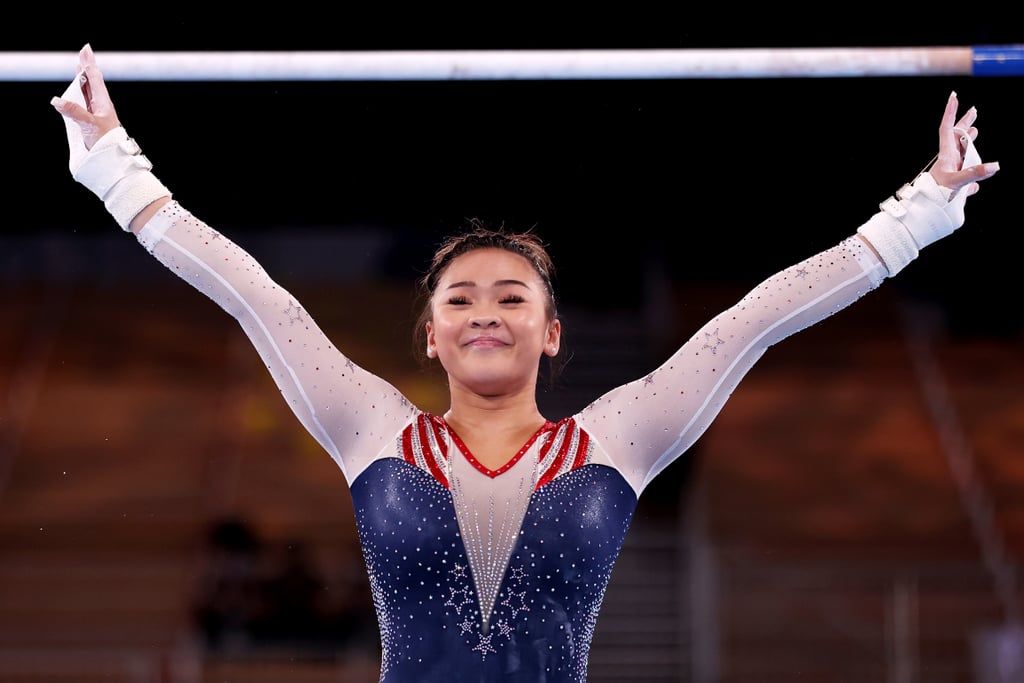 Sunisa Lee has earned an Olympic gold medal in the women's artistic gymnastics all-around competition — a close and exciting competition at that. The 18-year-old Minnesota native made history when she qualified for the Olympic Games as the first Hmong American to do so. Now, she's the first Hmong American gymnast (and athlete in general) to win an Olympic title. According to NBC News, she's also the first Asian American woman to win the coveted all-around title at a Games. This is the United States's fifth straight all-around victory at the Olympics.

Lee's all-around score of 57.433 on July 29 bested two-time Olympian Rebeca Andrade from Brazil. Andrade, who took second place in the qualifying round and then claimed silver in the finals, had a total of 57.298, which was less than a tenth higher than third-place finisher Angelina Melnikova from the Russian Olympic Committee. Andrade is the first Brazilian woman Olympic medalist in artistic gymnastics, and her 15.3 vault was the highest of the night, followed by American Jade Carey's 15.2. German gymnast Kim Bui, who finished in 17th place and is now a three-time Olympian, wore a unitard like she did in qualifications. Teammate Elisabeth Seitz, who also wore a unitard in qualifications, did not in the all-around final, where she finished ninth (but that's what their message is all about: having the option to choose). The competition field included twins Jessica and Jennifer Gadirova from Great Britain as well, who finished 10th and 13th, respectively.

Lee started out on vault with a massive Yurchenko double twist that had an exclamation point of a landing (14.6). Next up was bars, where she is one of the strongest in the world currently. She performed a spectacular routine on that event with a score of 15.3, then put up great numbers on beam (13.833) and floor (13.7) to finish out the competition strong. She was a top contender for a medal at these Games, having earned a third-place all-around score in qualifications and a total on night two of the US Olympic Trials that beat Simone Biles (note: Biles's combined total from both nights, though, ultimately won).

Carey, 21, who qualified as an individual to represent the US, took Biles's place after she withdrew for her mental health. Carey had received ninth place in the preliminary-round all-around, and though the top 24 gymnasts made it through to the final, she did not due to the two-per-country-maximum rule. She took this opportunity to compete in stride and showcased her consistency and powerhouse performances on vault (15.2) and floor (13.966). A fall on balance beam took her out of medal contention, but she has still competed with composure these entire Games so far, finishing in eighth overall. Catch her in the upcoming vault and floor event finals.

This is Lee's second medal of these Olympic Games, having won silver with Team USA two days ago. She has the bars and beam event finals coming up as well, so get ready for some more gymnastics from this superstar athlete.

Lee's father, John, was paralyzed from the chest down in 2019 after falling off of a ladder. She has described him as her best friend, who gives grade-A pep talks that, in recent years, consist of him telling her to have fun — and those words tend to calm her nerves. As NBC announcer John Roethlisberger said following Lee's cool and collected beam routine: "Just another day at the office!"

Ahead, check out snapshots of Lee, Carey, and other competitors after a fantastic all-around final at the Tokyo Olympics.