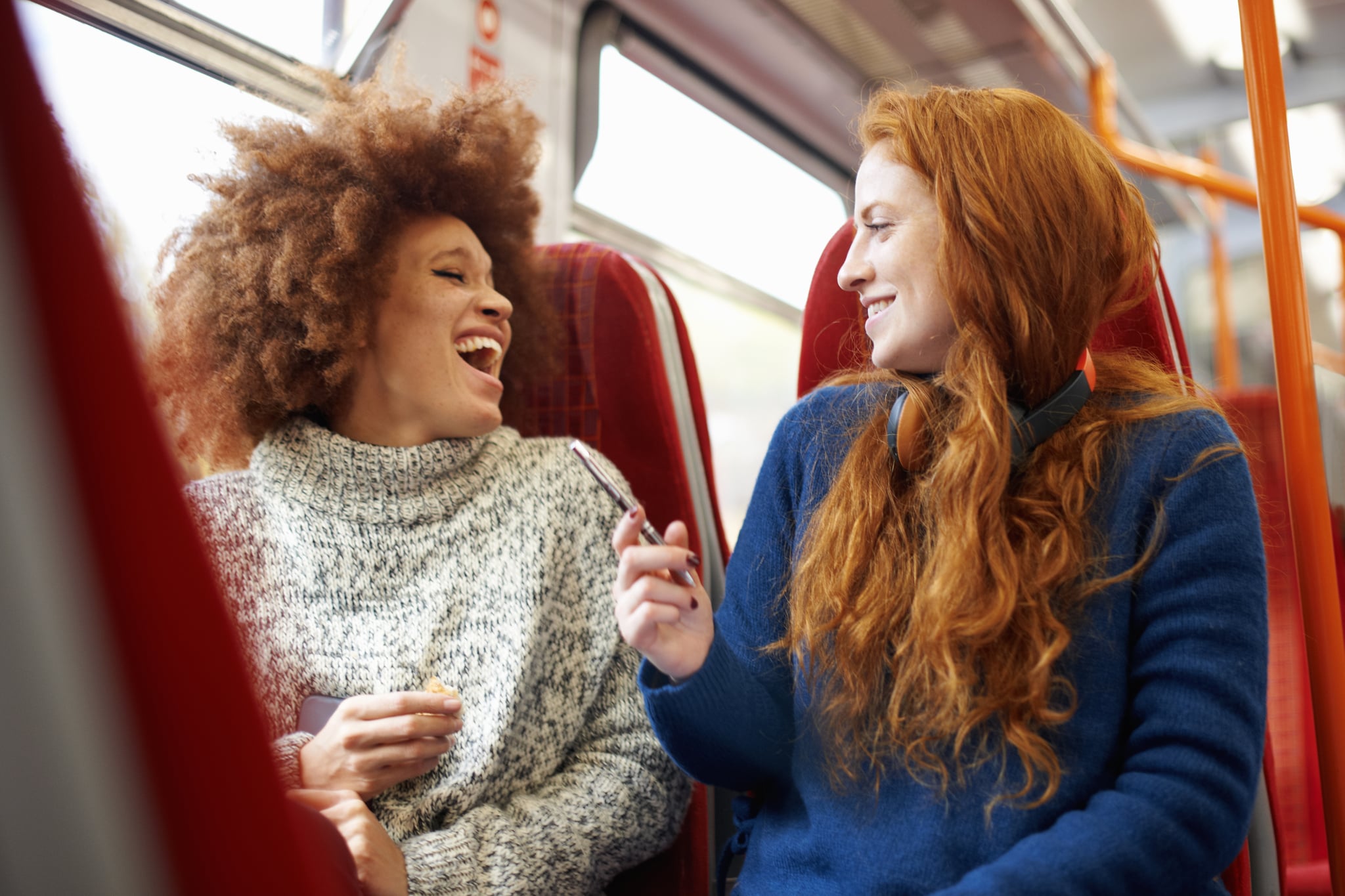 Whether or not the novel coronavirus (COVID-19) is airborne has been debated since the spring, and garnered more attention in July after 239 experts signed an open letter arguing that the World Health Organization (WHO) and other public health agencies have not properly recognized the possibility that humans can spread the virus through small droplets called aerosols. The WHO had maintained that airborne transmission is a risk only when aerosols are dispersed from infected patients during procedures in healthcare settings such as tracheal intubation and bronchoscopy. Then, in a July 9 scientific briefing breaking down the modes of transmission of COVID-19, the WHO acknowledged that airborne transmission is possible in other cases — and the CDC only recently followed suit. What scientists know about COVID-19 is changing — here's the lowdown on airborne transmission so far.

What Exactly Are Aerosols?

For background, there's a difference between respiratory droplets that can travel briefly and sink to the ground — which the CDC and the WHO still acknowledge to be the main form of transmission — and tiny droplets called aerosols. Aerosols are smaller than five micrometers or microns and can "float around for a while," Emily Landon, MD, medical director of antimicrobial stewardship and infection control at University of Chicago Medicine, explained in an article for UChicago.

Dr. Landon wrote the article back in March only days after a national emergency was first declared in the US due to the COVID-19 pandemic. But she explained the general distinction between aerosols and the "small bits of fluid that you can feel and see when someone sneezes," which is what the CDC and WHO typically refer to when they talk about droplet transmission. Aerosols are like hairspray in a room, she said. When you go into the bathroom later, it lingers. Furthermore, aerosols are airborne, and the larger droplets you can see when you cough or sneeze are not. And, according to The New York Times aerosols contain much less virus than droplets do.

The Debate Around Airborne Transmission Explained

The experts who signed the open letter in July argue that studies do suggest COVID-19 can in fact be airborne and travel through aerosols from person to person when someone breathes, talks, sings, etc., and it's especially risky when people are indoors with poor ventilation. The section on airborne transmission in the WHO's scientific briefing essentially said the WHO maintains its viewpoint on the main risk of airborne transmission being from medical procedures that generate aerosols. Anne Liu, MD, immunologist and infectious-disease doctor with Stanford Health Care, previously explained to POPSUGAR that these procedures could be, for instance, putting a tube down patients' throats to help them breathe. Procedures such as this could potentially make patients cough or gag, she said, and could generate more aerosols.

However, the WHO also acknowledged the possibility of aerosol transmission through normal breathing and talking, as well as when respiratory droplets evaporate. The scientific briefing states that people could therefore inhale aerosols and could become infected "if the aerosols contain the virus in sufficient quantity." More research on how much of these viral aerosols need to be inhaled to cause infection is required.

Timing of how long these aerosols last in the air has also been debated. A study from The New England Journal of Medicine meant to mimic sneezes or coughs from humans suggested aerosols remained viable in the air for three hours, though researchers told The New York Times in response that aerosols could likely be suspended in the air for 10 minutes to a half-hour, as the aerosols wouldn't last a full three hours airborne in a setting outside of the lab. The WHO reiterated this fact in its July 9 scientific briefing, stating that these "findings were from experimentally induced aerosols that do not reflect normal human cough conditions." The CDC recognizes that aerosols can last up to several hours in the air (which we'll explore ahead).

There is still a call for clearer public health guidance on airborne transmission, and a letter published by experts in Science on Oct. 5 asks for exactly that. "There is an urgent need to harmonize discussions about modes of virus transmission across disciplines to ensure the most effective control strategies and provide clear and consistent guidance to the public," the letter states.

Related:
From Bandanas to DIY Masks, This Is How Effective Your Face Covering Is, a Study Says

What the CDC Says About Airborne Transmission

The CDC took months to address the possibility of airborne transmission — and in September published guidance on its website acknowledging airborne transmission only to take the language down (the CDC said it was posted in error). As of Oct. 5, though the CDC maintains that COVID-19 is most frequently spread through those larger respiratory droplets released in a cough, sneeze, or breath when in close contact with others, new guidelines do acknowledge the virus can sometimes be spread by airborne transmission.

"Some infections can be spread by exposure to virus in small droplets and particles that can linger in the air for minutes to hours," the CDC notes. "These viruses may be able to infect people who are further than 6 feet away from the person who is infected or after that person has left the space." The CDC points to the fact that airborne transmissions are more likely to occur within enclosed spaces with poor ventilation (like we previously mentioned). Additionally, heavy breathing can be a factor as well. "Under these circumstances, scientists believe that the amount of infectious smaller droplets and particles produced by the people with COVID-19 became concentrated enough to spread the virus to other people," the guidelines read. "The people who were infected were in the same space during the same time or shortly after the person with COVID-19 had left."

The CDC further states in a scientific briefing that data suggests COVID-19 does not spread through airborne transmission at high rates like, for instance, measles does because "experts would expect to have observed considerably more rapid global spread of infection in early 2020 and higher percentages of prior infection measured by serosurveys."

The July open letter from experts specifically states that airborne transmission is the "only plausible explanation" for what has been called "superspreading events" where clusters of people are infected with COVID-19. For instance, a single individual with COVID-19 infected a confirmed 32 people (and 20 more probable others) during a two-and-a-half-hour choir practice in Washington State.

A paper published by the CDC, which looked at clusters of COVID-19 in Japan from January to April, noted many clusters were associated with "heavy breathing in close proximity, such as singing at karaoke parties, cheering at clubs, having conversations in bars, and exercising in gymnasiums." (You can read more about working out during COVID-19 here.) The size of the droplets in these scenarios is not clear, but those who signed the open letter believe airborne transmission is likely the case in superspreading events in general.

A transmission FAQ page also published on the WHO website in July acknowledges that there have been reported outbreaks of COVID-19 "in some closed settings, such as restaurants, nightclubs, places of worship or places of work where people may be shouting, talking, or singing. In these outbreaks, aerosol transmission, particularly in these indoor locations where there are crowded and inadequately ventilated spaces where infected persons spend long periods of time with others, cannot be ruled out." However, the WHO's scientific briefing makes clear that larger droplet and fomite transmission (contaminated surfaces) could also explain these clusters of cases, especially if masks were not worn, hand hygiene was not followed, and physical distancing was not maintained.

Related:
Is It Safe to Stay in a Hotel During COVID-19? Here's What the Experts Have to Say

There are factors that help protect us from the spread of virus-containing respiratory droplets, though. For instance, airflow plays a part. As we've mentioned, the risk is highest in crowded indoor spaces with poor ventilation like some churches, restaurants, clubs, and gyms (note: you should still wear a mask outdoors if you're near others). As Dr. Liu told POPSUGAR, "I hope that people understand that the longer you are indoors with other people, even if they're wearing cloth masks or surgical mask, the higher the risk of transmission becomes." Air circulation, she said, disperses respiratory droplets more effectively.

Let's be clear: this doesn't mean COVID-19 particles are just traveling through the air wherever you go. Bill Hanage, an epidemiologist at the Harvard T.H. Chan School of Public Health, clarified to The New York Times, "We have this notion that airborne transmission means droplets hanging in the air capable of infecting you many hours later, drifting down streets, through letter boxes and finding their way into homes everywhere." That, he said, is not the case. Instead, we should be wary of being in close range of people, especially indoors and especially when there is a lack of physical distancing happening in a crowded place.

The WHO recommends avoiding closed settings and crowded situations, and it recommends optimal ventilation of indoor environments — this is echoed by the CDC. What's more, the WHO recommends physical distancing and masks. For the general public, fabric masks are suggested in areas of widespread transmission where physical distancing is not possible. Medical masks (including N95 face masks and surgical face masks), the WHO says, should be saved for healthcare workers, anyone with symptoms suggestive of COVID-19, people caring for those with COVID-19, and high-risk individuals when they cannot physically distance.

The CDC states that, "at this time, there is no indication of a general community need to use special engineering controls, such as those required to protect against airborne transmission of infections, like measles or tuberculosis, in the healthcare setting."

What to Remember Moving Forward

Wear masks when physical distancing cannot occur, especially when indoors. Cloth masks are recommended for the general public. "Even cloth masks, if worn by everyone, can significantly reduce transmission," one aerosol expert told The New York Times.

Avoid crowded places, especially indoors where you can't physically distance from others. Superspreading events can occur when people are indoors for long periods of time with poor ventilation.

Don't forget about other safety measures. Wash your hands, and stay home if you feel sick. If you are a person who is at a higher risk of infection, take appropriate precautions. Call your doctor with any questions, and follow the guidelines put in place where you live.

Healthy Living
No, There's Nothing Magnetic in the COVID-19 Vaccines — Experts Debunk Misinformation
by Samantha Brodsky 4 days ago

Child Health and Safety
The Major Reason the Surgeon General Says That "Yes, It Is Necessary" to Vaccinate Kids
by Kate Schweitzer 4 days ago 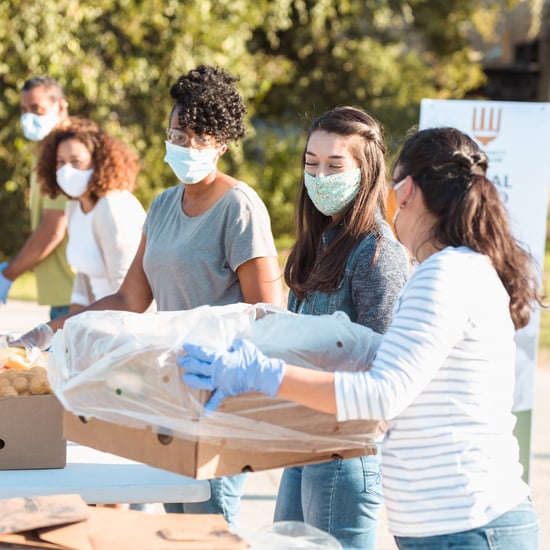 Health
The Latinx Community Is Still One of the Hardest Hit by the Pandemic, and This Is How You Can Make a Difference
by Irene San Segundo 5 days ago