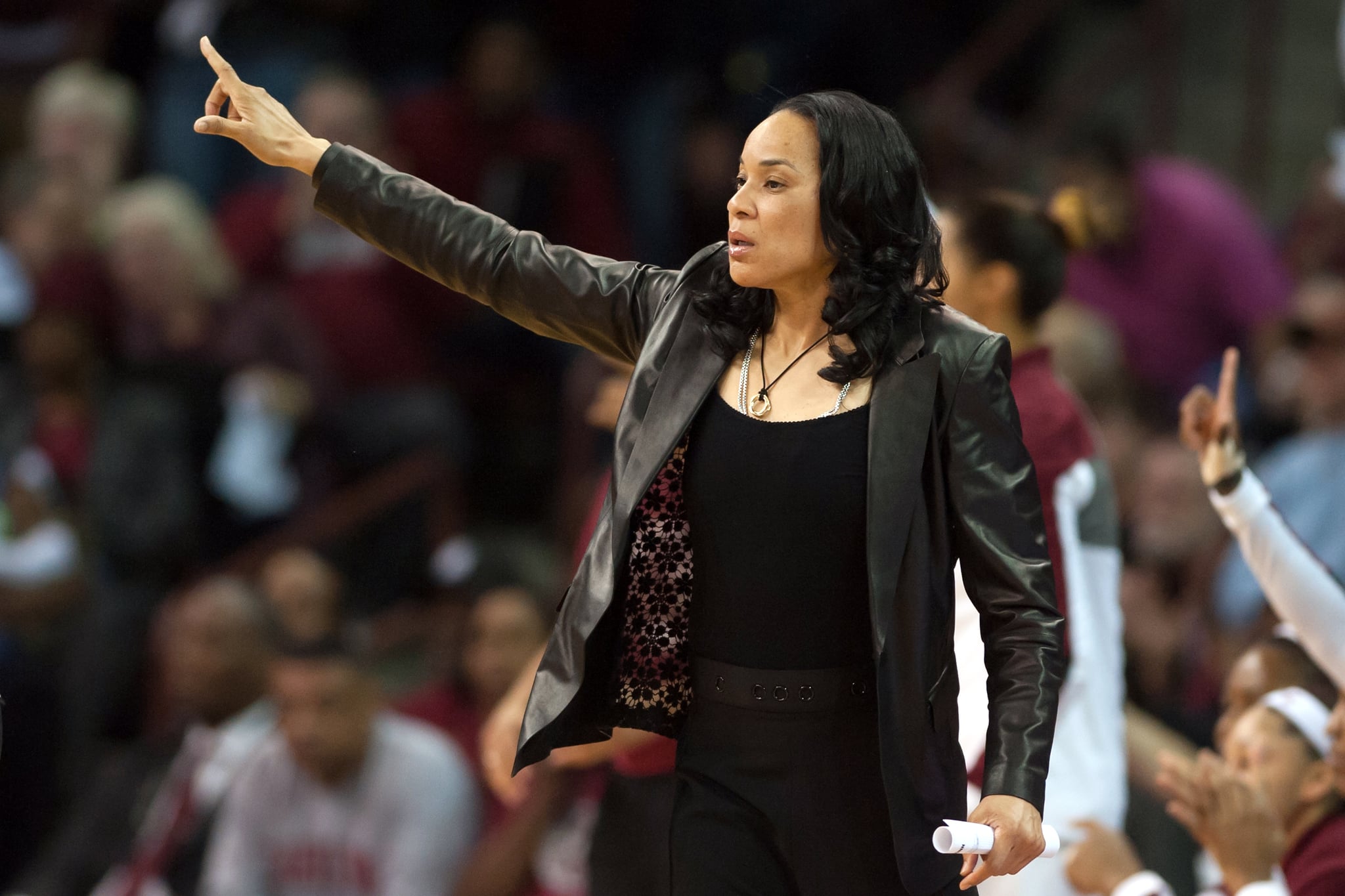 Hall of Fame basketball player and three-time Olympian Dawn Staley was quiet when she first started at the University of Virginia. As documented on Netflix's The Playbook series, she went from growing up in a diverse neighborhood in north Philly to a predominantly white institution. "There I saw so many white people, like more so than I ever have seen in my life," she said in the docuseries episode devoted to her accomplishments in, and takeaways from, the sport. "I didn't feel comfortable being me. I didn't talk much. [. . .] I don't even think I had a voice."

Staley, who coached the University of South Carolina Gamecocks to their 2017 NCAA championship victory in women's basketball and five SEC tournament titles, certainly found that voice, especially when it comes to racism in this country. She told POPSUGAR, "I have more experiences in seeing it firsthand, and I see it all around me."

"My heart is full when I see young people embrace and stand for something that they see is wrong in their eyes and they're persistent with it."

Back in June, Staley, who is also the head coach of the USA women's national basketball team headed to the 2021 Olympics next summer, wrote a personal essay for The Player's Tribune titled "Black People Are Tired" in reaction to the killing of George Floyd. She's also been an advocate for increasing diversity at USC (she is only one of two Black head coaches on staff at the university). "We're having mandatory diversity meetings in the athletics department," she said. "There is conversation that we've never had, so I hope that continues."

Staley paused, then noted, "It will continue because I'm going to be a part of just pushing that forward. Things need to change — not just for Black people but for our university. We represent a student body that's diverse, and that diversity should be included as staff members, coaches, and administrators."

When it comes to athletes demonstrating for racial justice, particularly in the WNBA — they dedicated their entire season to that cause and joined other sports teams in a strike after the shooting of Jacob Blake — she's nothing but hopeful. "My heart is full," she said. "My heart is full when I see young people embrace and stand for something that they see is wrong in their eyes and they're persistent with it." Among those demonstrating is Staley's standout former player A'ja Wilson, who told POPSUGAR in a previous interview that her main goal is to give a voice to the voiceless.

Staley further said the athletes — and others working to address racism — must find endurance in this fight. "They have to, and we have to, have enough stamina to continue because you can get tired and you get weary and you can think nothing's ever going to change. That's when we have to continue to push through because nothing changes overnight, we all know that."

Related:
We're Asking Too Much From NBA Players

The USC Gamecocks' season starts Nov. 25, and Staley said she hasn't heard yet if the players want to follow suit once they're on the court again as a team. "I think they get on board because they see it now, and then they see other people their age are speaking out, so they feel the need to do that. I just don't want them to speak up because I'm speaking up. That's the wrong reason." She continued, "It hasn't hit them in a place where it hit me, which is my heart. That's where I wanted to come from because that's pure, and when it hits your heart, it stays until there's change."

"I want to hear why people feel the way they feel. I want to know why people choose to kneel or stand."

Staley aims to keep an open dialogue, not muffle opinions — especially not the voices of athletes. "I want to hear why people feel the way they feel. I want to know why people choose to kneel or stand. I want to know all of those things. Not just 'shut up and dribble' or 'keep politics out of sports.'"

Staley went on to state that Black people are a "big part of this society" and "a talented people." And "when given an opportunity, we succeed, trust me on that. When you move the goalpost, and we know you're doing it, we figure it out and we succeed." She added, "I just feel like we're at a place where we can make change. We have to continue."

Olympics
Just How Fast Do Olympic Speed Skaters Move on the Ice? Blink and You Might Miss Them
by Emily Weaver 1 day ago

Simone Biles
Nathan Chen Says That, When the Time Comes, Athletes Need to "Do What's Best For Us"
by Samantha Brodsky 1 day ago

Netflix
After Watching Episode 1 of Netflix's Bad Sport, I'm Not Sure Who the Real Criminal Is
by Ashley Ortiz 1 day ago

Winter Fashion
Tan France Launches Genderless Outerwear Label Was Him: "We Want to Be an Inclusive Brand"
by Sarah Wasilak 1 day ago