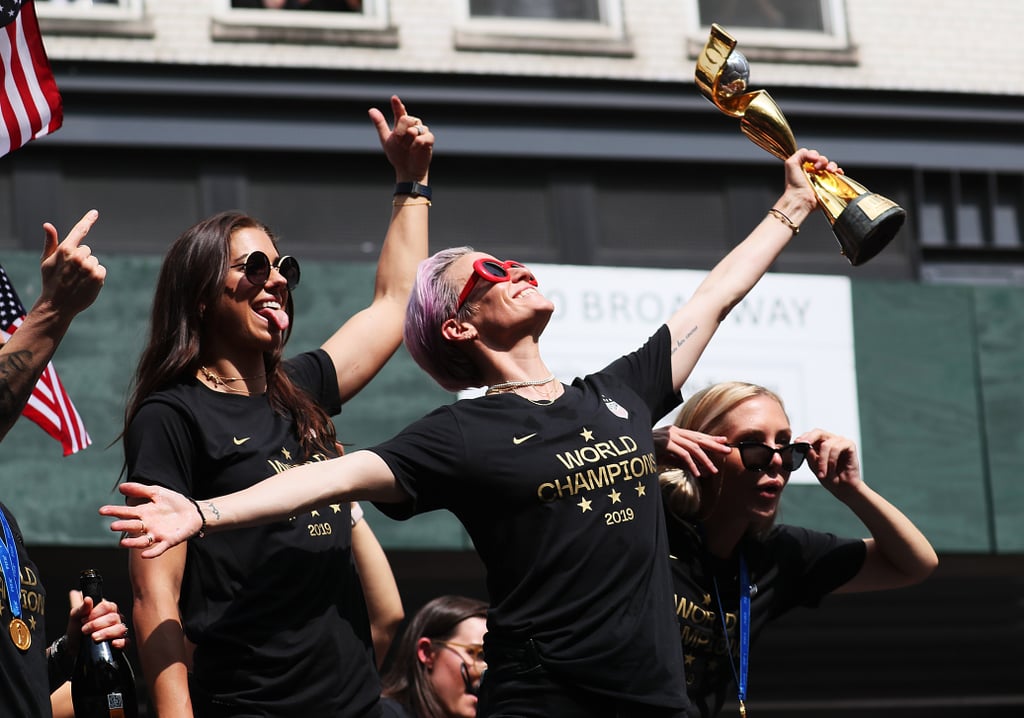 Champagne and confetti are in store for the US Women's National Soccer Team. The 23 kickass players came home after their historic World Cup win — here's a list of records the team broke if you need a refresher. They've been celebrating ever since, and July 10 marked a crowded and well-deserved ticker-tape parade in Lower Manhattan. On the US floats, clad in sunglasses, medals, and "World Champion" t-shirts, stood Megan Rapinoe, who won the coveted Golden Boot for most goals and Golden Ball for the best player in the tournament, along with teammates Alex Morgan (Silver Boot winner) and Rose Lavelle (Bronze Ball winner). Greats like Carli Lloyd and Julie Ertz joined them.

If you missed the parade, there was lots of confetti (duh) and power poses. Also, team members, including Crystal Dunn, started an "equal pay" chant. We'd expect nothing less from the group whose platform at the World Cup brought attention to the US Soccer Federation gender pay gap. At one point, Alex sprayed the crowd with Champagne — which, if we could guess, felt like being showered with fearlessness.

At a ceremony after the parade, Megan was the last person to speak for her team. Addressing the crowd at New York City Hall, the 34-year-old cocaptain said, "This is my charge to everyone: we have to be better. We have to love more, hate less. We have to listen more and talk less." She went on to say, "It's our responsibility to make this world a better place. I think this team does an incredible job of taking that on our shoulders and understanding the position that we have and the platform we have. Yes, we play sports; yes, we play soccer; yes, we're female athletes, but we're so much more than that. You're so much more than that." She challenged everyone to step outside of themselves to do good in their communities.

Ahead, check out pictures from the celebrations that will warm your heart and make you even more proud of these great women.

Olympics
Carli Lloyd Talks Fighting For a Spot on the Soccer Field: "Every Day Is Basically Like a Tryout"
by Samantha Brodsky 1 day ago

Workouts
If Halle Berry Could Only Do One Exercise For the Rest of Her Life, It'd Be a Plank — Here's Why
by Tamara Pridgett 1 day ago