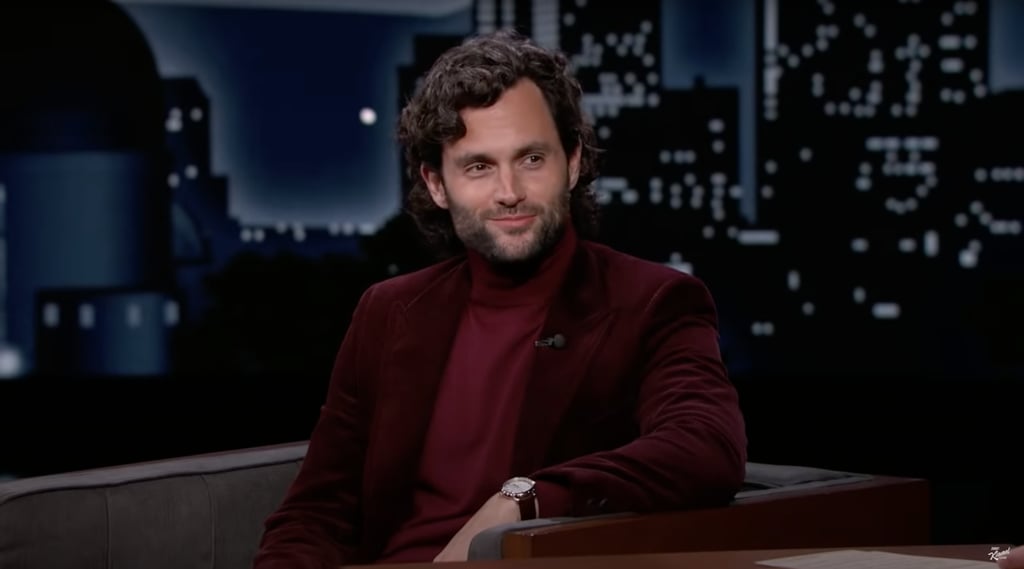 Joe Goldberg's wardrobe on You may consist of basic button-downs, plain tees, and logo-less baseball caps, but Penn Badgley's real-life style offers far more pizzazz. The actor proved this fact during his recent appearance on Jimmy Kimmel Live!, serving up a heaping dose of fashionable eye candy to sustain me for the week. Styled by Warren Alfie Baker, Penn strolled into his late-night interview looking dapper as ever in a maroon velvet Giorgio Armani suit and coordinating Canali turtleneck. He topped off the monochromatic look with brown Christian Louboutin shoes, a Montblanc watch, and, because apparently he was on a mission to induce some major thirst, a gold pinky ring.

Penn's dashing ensemble — paired with his facial scruff, perfectly tousled curls, and dreamy smirk — had me feeling quite distracted as he chatted with host Jimmy about You season three and his newfound friendship with Cardi B, among other topics. The outfit, and especially his maroon blazer, was reminiscent of something Willy Wonka would wear after selling his chocolate factory, making millions, and moving to the Italian countryside to open a swanky, members-only coffee shop — and I mean that in the most complimentary way possible.

Read ahead to admire Penn's swoon-worthy fashion moment ahead, and let's hope Joe wears some turtlenecks in You season four because whew, does this man look good in 'em.

Celebrity Instagrams
Jamie Lynn Spears Addresses Britney's Book Comments, Says It's "Not About Her"
by Naledi Ushe 4 days ago