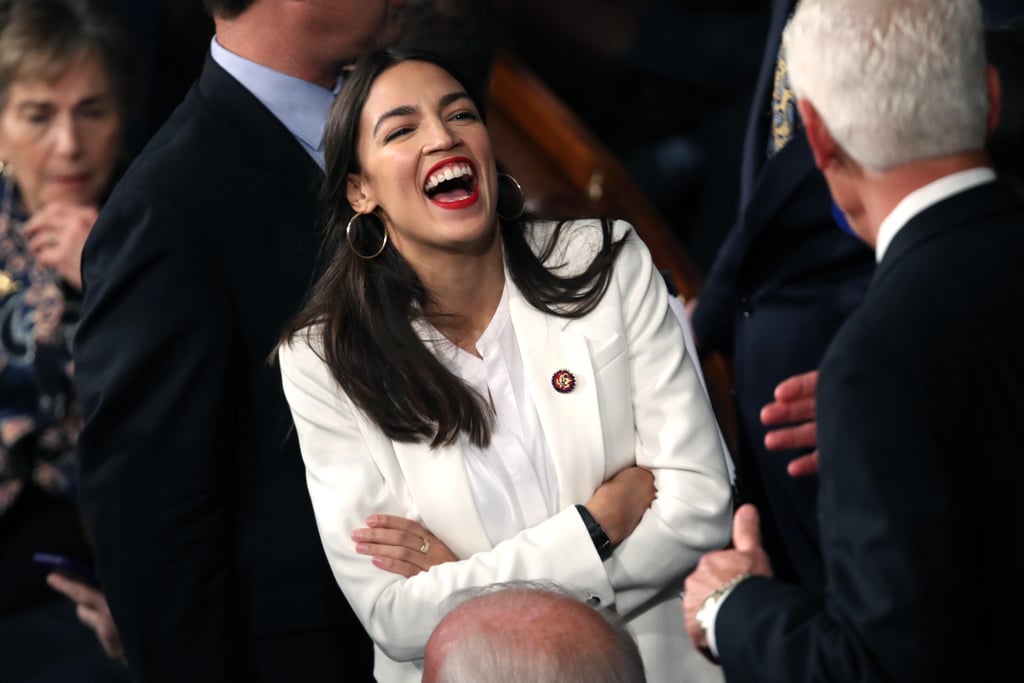 When politics becomes a space where critics, skeptics, and worse — antifeminists and racists — have used a thinly veiled fashion commentary to undercut their opposition, personal style becomes something of a public battleground, imbued with hidden meaning. Hillary Clinton and Michelle Obama certainly know something about that. But even newcomer Alexandria Ocasio-Cortez, who has barely spent a week in Congress, has already endured attacks on her appearance that were launched even before she took her oath as a member of the House.

Unfortunately, that's just how it goes. When we should be focusing on her message, we've been trained to look at her clothes, her smile, her hair. Even a look as innocuous as a black blazer has been the subject of scrutiny by a conservative writer who deemed the jacket too expensive-looking for a middle-class woman, an attempt to undermine Alexandria's message by attacking her clothing choice because it was what — too put-together? Too polished for someone "struggling"? It didn't accurately reflect who she says she is and what she says she stands for? If you believe that, you clearly haven't been paying attention.

The youngest woman ever elected to Congress didn't get here by accident. She's deliberate and direct with her messages — and that includes her wardrobe. She's leaning into the scrutiny with intentional clothing and accessories, as if to say, if the world is going to talk about my fashion choices, I'll give them something to talk about. In that vein, she dressed in a white suit, gold hoops, and a red lip for her swearing in in Congress and let us all know why on Twitter, adeptly paying homage to both the strong women who have come before her and the strong women she represents:

I wore all-white today to honor the women who paved the path before me, and for all the women yet to come.

From suffragettes to Shirley Chisholm, I wouldn’t be here if it wasn’t for the mothers of the movement. ⬇️ https://t.co/GBfSSYxbek

Lip+hoops were inspired by Sonia Sotomayor, who was advised to wear neutral-colored nail polish to her confirmation hearings to avoid scrutiny. She kept her red.

Next time someone tells Bronx girls to take off their hoops, they can just say they’re dressing like a Congresswoman. https://t.co/eYN5xYFcTE

Watch her take control of her own style narrative, using her dress to inform, to provoke, to fire right back at her haters. In a place where dressing cues are so often used to objectify or sublimate women, Alexandria is flipping it all on its head, using what she wears to do the exact opposite: to show herself, to connect to other women, and to connect to women of color. As far as I'm concerned, that's the making of a great leader – and a fashion icon.

Here, take a look at some of our favorite fashion moments so far.