Late night host and comedian Seth Meyers and his wife, human rights lawyer Alexi Ashe Meyers, have two adorable sons, both of whom came into the world on their birthdays very quickly, completely ready to roll. The couple tied the knot on Sept. 1, 2013, in Martha's Vineyard, and in a post to Twitter on their fifth anniversary, Seth wrote: "Five years ago today I married my amazing wife Alexi. We've since added two incredible boys, neither of whom would take their hands out of their mouths for this picture."

Keep scrolling to learn more about Seth and Alexi's sons and to see some of their cutest photos. 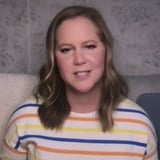 Lizzo
"Happy Bday, Mom!": Lizzo Surprised Her Mama With a Luxe New Wardrobe For Her Birthday
by Chanel Vargas 6 days ago

Late Night With Seth Meyers
In a Surprising Turn of Events, Seth Meyers Is the Reason We're Buying the Rare Beauty Mascara
by Perri Konecky 1 week ago

Olivia Munn
After a Whirlwind Romance, John Mulaney and Olivia Munn Are Expecting Their First Child
by Kelsey Garcia 1 week ago