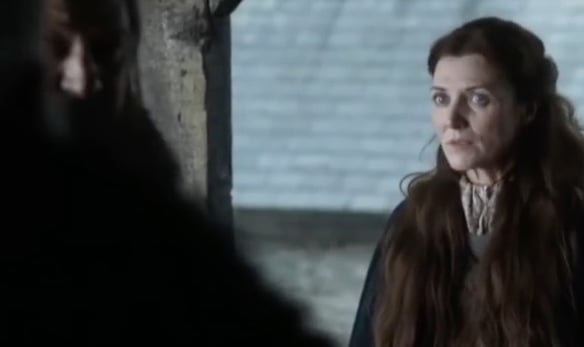 There's no doubt that the Queen of Winterfell was a frontrunner from the beginning when it came down to being voted number one mom. Like Cersei, she's super protective and truly wants the best for all her kids.

After Jaime throttles Bran out the window, who nursed him back to health? His mom, obviously. When Ned gets killed in King's Landing, what's the first thing she does? Tries to make sure her daughters Sansa and Arya are safe. She literally begged Littlefinger to keep them safe. She also helps her oldest kid Robb lead an army against the Lannisters before they all get murdered in cold blood.

The one black spot on her résumé is how she treats Ned's "bastard son" Jon Snow, who's not technically hers. Heck, she wouldn't even let him say goodbye to Bran before he shipped him off to the Wall forever. Bottom line: she treats him like complete garbage, and we're not OK with that, which lands her in fourth place at the end of the day.

Related:
4 Ways Jon Snow Might Find Out Who His Parents Are in Season 7
0
previous images
-22
more images
Previous Next Start Slideshow
Game Of ThronesParentingParenting HumorMotherhoodHumor
Around The Web

Babies
Shawn Johnson's Advice to New Moms on Formula Feeding: "Don't Stress About It"
by Murphy Moroney 19 hours ago

Home Decor
This Only Child Candle "Smells Like an Imaginary Friend," and LOL, the Truth to This
by Chelsea Dolan 1 day ago