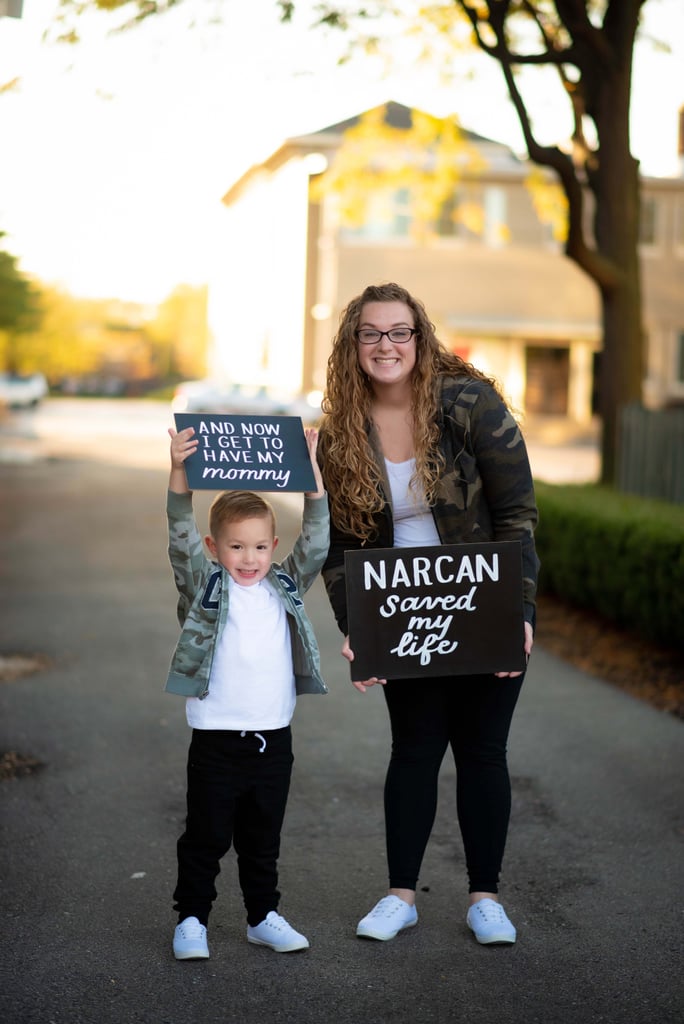 Erika Hurt, a mom who officially swore off drugs three years ago, has completely turned it around ever since police photographed her overdosing in a car in Hope, IN, in 2016. While the viral image of Erika at rock bottom is certainly disturbing, the most upsetting part was that her 10-month-old son, Parker, was in the back seat of the car at the time. After going to prison and getting the help she needed, Erika is now three years clean. To celebrate her sobriety and motherhood, she set up a photo shoot with Parker and enlisted photographer Ali Elizabeth to illustrate how far she's come.

"Today marks THREE ENTIRE YEARS of sobriety for me! Y'all already know, but allow me to recap," she wrote in an emotional Facebook post. "Three years ago I was receiving Narcan to bring me back to life after I had overdosed on heroin; all while my son, my mom, and her wife stood and watched. While those are such emotional moments for my family to recall, that's really not what is MOST important today."

"I was unable to hold a job due to my attendance. I was a liar, and a thief. I was homeless. I was depressed."

Because of just how serious Erika's addiction was at the time, there was nothing that could stop her from getting a fix, including her family. It wasn't until she overdosed and received Narcan — a medication that can help to stop an opioid overdose — that she knew she needed to seek treatment once and for all. "What is really important today, is the fact that Narcan saved my life! Narcan kept me alive until I wanted to live!" she said. "While I can admit that my son was unfortunately NOT enough to keep me sober then, he is my motivation today. Had Narcan not been available to me; or had someone who felt that I DIDN'T DESERVE Narcan been there that day, I would have NEVER had the chance to get sober and my son would be growing up without ever knowing his mom."

Like many people who get sucked into opioid addiction, Erika's downward spiral began with a prescription. After she got a staph infection on her face at 15, Erika's doctor prescribed her an antibiotic and hydrocodone for the pain. By the age of 19, she was using heroin.

"I used drugs for a total of 10 years. I was unable to hold a job due to my attendance. I was a liar, and a thief. I was homeless. I was depressed. I became a felon," she told POPSUGAR. "I could not perform normal motherly duties to my son because I was dope sick and searching for my next high. My mental development was stunted and my financial health was depleted. I ruined my credit, and burned many bridges with family."

Now, as a mom with a few years of sobriety under her belt, Erika is thankful for how much her life has changed. "My life is SO different. First and foremost, my son and I share an inseparable bond," she said. "I provide 100 percent for him. I am honest and trustworthy. I am responsible and I am dependable. I am making progress financially and mentally. I have wonderful self-awareness and I can accept criticism."

Scroll ahead to get a look at Erika's celebratory photo shoot, because three years clean is a huge deal.

Related:
I'm a Sober Mom, and This Is What I Want You to Know
Previous Next Start Slideshow
PhotographyParentingSobrietyMotherhoodTouching Stories
Around The Web