Mom of two Mindy Kaling shared how she was able to keep her pregnancy with her 7-week-old son, Spencer, a secret in an interview with Jenna Bush Hager.

"With him, I would just occasionally have meetings," she told Today. "So from here up, I would have to look nice, but I was just kind of like pregnant, and no one saw. And then I just thought, 'What if I could get away with this?'"

Related:
Chrissy Teigen Shared Why She Took Photos During Her Pregnancy Loss in a Moving Essay

Mindy also opened up about how her 2-year-old daughter, Katherine, was less than thrilled to meet her new baby brother at first. "She was very suspicious and worried about him at the beginning," she said. "Because I think in her mind, she thought that he would come out as a 2-year-old. She kept saying like, 'I'm really worried about my toys.' And then when she saw that he was just like this helpless, little, adorable blob, but like not interested in toys at all, she's like, 'Oh, I love this guy.'"

"And I just thought, 'What if I could get away with this?'"

Although Mindy assumed having children would change who she is at her core, she's realized that she's still the same person. "I imagined that with motherhood, that somehow my personality would completely change, that I would become this incredibly maternal person who did all these other things," Mindy explained. "I've actually found that I didn't change, but somehow, like, just my heart expanded a little bit."

Mindy also discussed the support system she has as a single mom, explaining that B.J. Novak — yes, her on-again, off-again boyfriend on The Office — is actually the godfather of her two kids.

"You know, he said the funniest thing because he's so attached to my older child, my daughter," she said. "When I said, you know, B.J., if something happens to me, it's not like I have a husband, like you have to just take the kids. And he's like, 'Oh, my God, don't tempt me.' And he said the funniest thing. He was like, 'Can you sue for god paternity rights?' Because he's the godfather because he just like loves her so much."

Related:
Eva Mendes and Ryan Gosling Feel Like They're Running a Hotel Amid COVID-19, and Yep, That Tracks

Amid all of the uncertainty caused by the pandemic, Mindy is just thankful to have two healthy kids at home. "This time has been so challenging," said Mindy. "So just to have this little, cuddly nine-pound human living with me has just been the most fun, uplifting thing."

Tina Fey
Tina Fey's Daughters Threw an Airplane-Themed Dinner With Beverage Service: "It Was a Dream"
by Karenna Meredith 3 days ago

Joey King
Joey King Wished Her Grandma a Happy Birthday on Instagram, and Their Photos Are So Sweet!
by Chanel Vargas 4 days ago 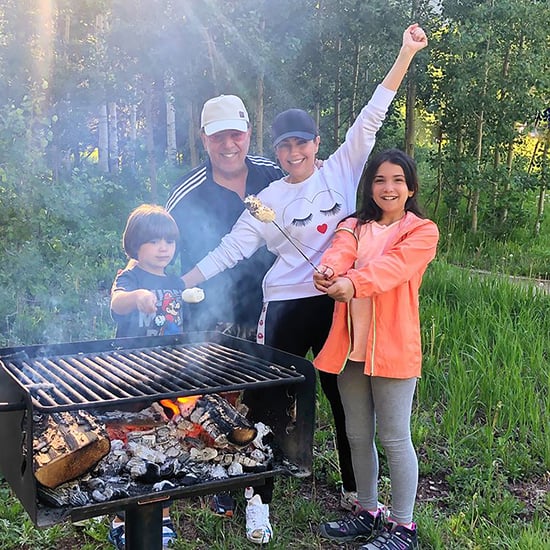