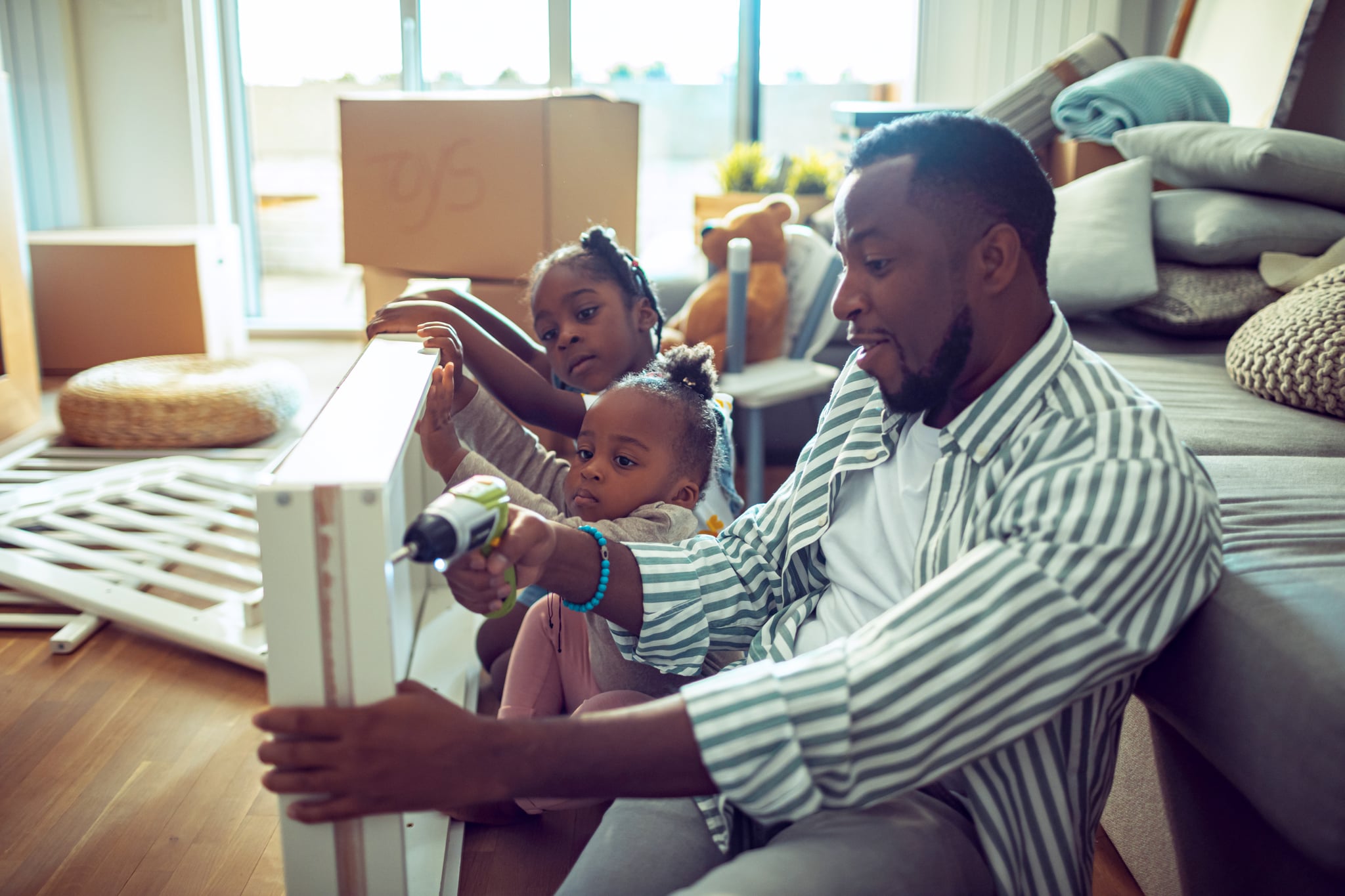 Raising well-adjusted daughters starts with building up their confidence at a young age. While we hope our kiddos grow up to be kind and polite, we also want them to be able to stand up for themselves and go after their dreams. We asked two experts for their best tips for instilling confidence in our daughters, and as expected, it truly begins with the behavior we model. Read ahead to see what parents should be aware of while bringing up their little ones.

Related:
Instead of a Normal Timeout, My Toddlers Get "Mommy Timeouts" — It Works Much Better!

Although many parents have made it a point to practice saying self-affirmations with their toddlers, tying these words of praise to actions is even more beneficial. "If you start to tell your kids from a young age that they are thoughtful or kind after doing something [like sharing a toy with a friend], it will make an impact because they're not always going to be thoughtful and kind," Dr. Rachel B. Prete — a pediatrician at Winnie Palmer Hospital for Women and Babies in Orlando, FL, and a mom of two teenage girls — told POPSUGAR.

According to Dr. Prete, focusing on positive actions will make more of an impression than simply repeating statements over and over again. "What really matters is that you're calling your kid out at that moment and saying, 'You know what, that was so kind of you' or 'I'm so proud of you. How nice that you helped your sister across the street!' or 'I saw you let the kid go first on the slide, and that was very thoughtful,'" she said. "Tying praise to actions is really going to pay off in the long run."

"Affirmations with no behavior is nothing."

Dr. Broderick Sawyer, a clinical psychologist specializing in race-based stress and trauma and mindfulness, agreed that praise should be tied to behavior. He also explained that the principles of said affirmations need to be embodied by both the child and the parent to be successful.

"Affirmations with no behavior is nothing," he said. "If I say, 'I love myself and da, da, da, da, da,' that's an affirmation. But then, if a mom is like, 'OK, how'd you do on that test? Oh, you didn't do so well? No dessert.' Or if she looks openly angry or is cold and withholding, she's teaching her kids to say that they should love themselves and that Mommy loves them, but then she's reflecting that love may not be there in her behavior."

Related:
This 6-Year-Old Is Melting Hearts For Teaching His Brother How to Breathe Through a Tantrum

2. Remind girls that being "pretty" or "cute" aren't their only positive attributes.

Because girls are often first described by their looks — we've all heard "Aw, she's so cute!" a thousand times — being mindful about how you compliment your kids is also critical.

"You should absolutely tell your kid that they're beautiful," said Dr. Prete. "But you should also tell them they're smart and confident by pointing out the internal characteristics you love about them, too."

Moreover, Dr. Prete wants parents to be cognizant of how they talk about themselves in front of their children. If you don't use positive self-talk with yourself, it's impossible to expect your daughters to do it. "You should not body shame yourself in front of your kids," said Dr. Prete. "To some degree, it's OK to admit your own insecurities because everybody has them, but modeling good behavior in respect to your body is important. I'll have ice cream every once in a while, but I don't eat it every night. I also try to make exercise an important part of my routine, even though I'm a busy working mom. Parents need to lead by example. We can't expect our kids to eat better than us and exercise unless we are modeling that behavior."

3. Mirror your child's enthusiasm when they get excited about something.

Supporting your child's interests is also a major component of raising a confident daughter. "When a parent notices that their little girl is really jazzed up and excited, get excited with her," explained Dr. Sawyer. "It doesn't matter if she says, 'I want to go to Pluto and I want to jump into space without a spacesuit because I'm just so powerful enough.' It's not the time to say, 'Well, logically speaking, that doesn't make sense.'"

He continued, noting that you shouldn't necessarily worry about grounding young kids into reality just yet: "Don't worry about getting their hopes up. If they don't have their hopes up, then they're not going to apply for that job that they could maybe get. And when they're kids, you can train that level of confidence because if they think anything is possible, then when they fail, they say, 'Well, anything's possible, so I'm just going to re-up.'"

Related:
Yes Day Is a Classic Family Film — Here's What Parents Need to Know Before Watching!

4. Make sure your kids' confidence isn't tied to their successes.

Because we live in a capitalist society, confidence is often directly tied to success. We also live in a time where a person's value is based on being the best or winning — which is only exacerbated by social media — rather than celebrating those who are learning and trying. Dr. Sawyer wants to make it clear that effort should also be celebrated. "In this world, true confidence is self-assured — it's not related to your child's successes or failures," he said. "It's stable. So if your child succeeds in something, [that's great], but it's not a reflection of their self-worth."

"In this world, true confidence is self-assured — it's not related to your child's successes or failures."

Conversely, when a child fails at a task, it's not indicative of their self-worth, either. "Self-worth is related to a basic sense of the self — it's a basic confidence that a person is good enough, regardless of what they produce or do not produce, regardless of what people say about them," he explained.

Dr. Prete agreed and brought up a recent discussion she had with her youngest daughter, who's in high school, as an example. "My child came to me recently and said, 'I just want to be a kid. I don't want to have to take all these AP classes,'" explained Dr. Prete, who knew the pressure to succeed academically was getting to her teen. "I said to her, 'You know what, that's totally fine because you're going to get into a college. You're a smart kid. I don't need you to take those high-level courses. If you want to focus more on lacrosse and still do well in [less rigorous] classes, that's fine.'"

Similarly, parents of younger children can also be mindful when it comes to creating their schedules. Signing children up for multiple activities at once can be overwhelming and lead to burnout, said Dr. Prete.

5. Encourage kids to set boundaries and stick to them.

Allowing children to set boundaries will help them become confident adults. According to Dr. Sawyer, teaching kids to say no when they're uncomfortable is paramount. "If your kid doesn't want to kiss their grandparent, that's OK," he said. "You can say, 'Oh, do you not want to? That's OK. You can say no. You don't have to touch anybody that you don't want to.' We want to instill that having boundaries is OK because when we allow boundaries to be crossed, that sends a message that [they can't say no]."

Additionally, parents can encourage kids to set boundaries in other facets of their lives, including how much food they eat at mealtime (instead of forcing kids to clean their plates), telling their friends they're uncomfortable with a specific activity, or stating that they don't feel like sharing a particular toy at that moment.

Related:
High Schooler or Not, These 72 Teen Movies on Netflix Are Too Fun to Miss

To raise confident daughters, parents need to reexamine some of their own shortcomings. "We need to deepen our own awareness of our own flaws and our own insecurities," said Dr. Sawyer. "In particular, dads need to be feminists — and not just reading feminist [books] — but embodying it."

Dr. Sawyer recommended books like Feminism is for Everybody, The Will to Change, and All About Love for beginners who want to learn more about feminism and modeling good behavior for their kiddos. One of the major goals of these books is to teach men that they can show their emotions and vulnerabilities when they're upset or scared. "We have internalized [not showing certain emotions] and have been reinforced through societal norms," he explained. "There might be [a father who was raised by a dad in the baby boomer generation] who picked up the pink Lego blocks when he was a kid and his father smacked his head in a way and said, 'Hey!' or he cried and his father said 'Don't cry!' And this is reinforced by societal norms."

He also wants to remind parents that we have the biggest impact on our kids' emotional well-being, so we need to be cognizant about how we act in front of them. "We have the most say over their self-image," he said. "When they come home and say, 'The kids bullied me because I wanted to be a superhero instead of a princess,' we have the opportunity to validate a more feminist consciousness in those moments."

Additionally, Dr. Prete underscored the importance of not gendering certain household activities. "We only have daughters, and I think it's just a matter of making sure the expectations are the same throughout your family," she shared. "I'm the one who mowed the lawn at my house. I didn't wait for my dad to come home. He was like, 'Nope, we've got a lawn to mow, and you have to do it.' And the same thing goes in our house."

7. Teach girls that it's OK to break the rules sometimes.

According to Dr. Sawyer, girls shouldn't be afraid to question problematic societal norms. "All girls are taught to be polite and follow the rules," he said. "We can't stop that from happening because society punishes girls for not playing by the rules. It's very difficult to teach people to dissent or oppose social norms — even if those norms cause harm — because there is punishment for not obeying. That's why raising confident girls and helping them learn to oppose or dissent has a lot to do with the progress of the feminist movement."

Challenging gender norms may look like asking follow-up questions about double standards or dressing in a style that's deemed unconventional. "If we want confident girls to dissent from sexist social norms, we have to create a social environment that does not punish women and girls for drawing outside of the lines of what is seen as 'acceptable female behavior,'" he said. "So, when we fight for gender justice in our daily lives, whether we are men or women, we are actively making the world a safer place to dissent."

8. Foster a sense of unconditional love with your daughters.

Ultimately, giving your children unconditional love regardless of their successes and failures is a great way to foster confidence. And that starts with loving yourself first. "If we learn how to give ourselves unconditional love, we will then reflect that in all of our relationships," said Dr. Sawyer. "You carry it around with you. If you're trying to show unconditional love to your kid, but you don't love yourself, that's going to come out."