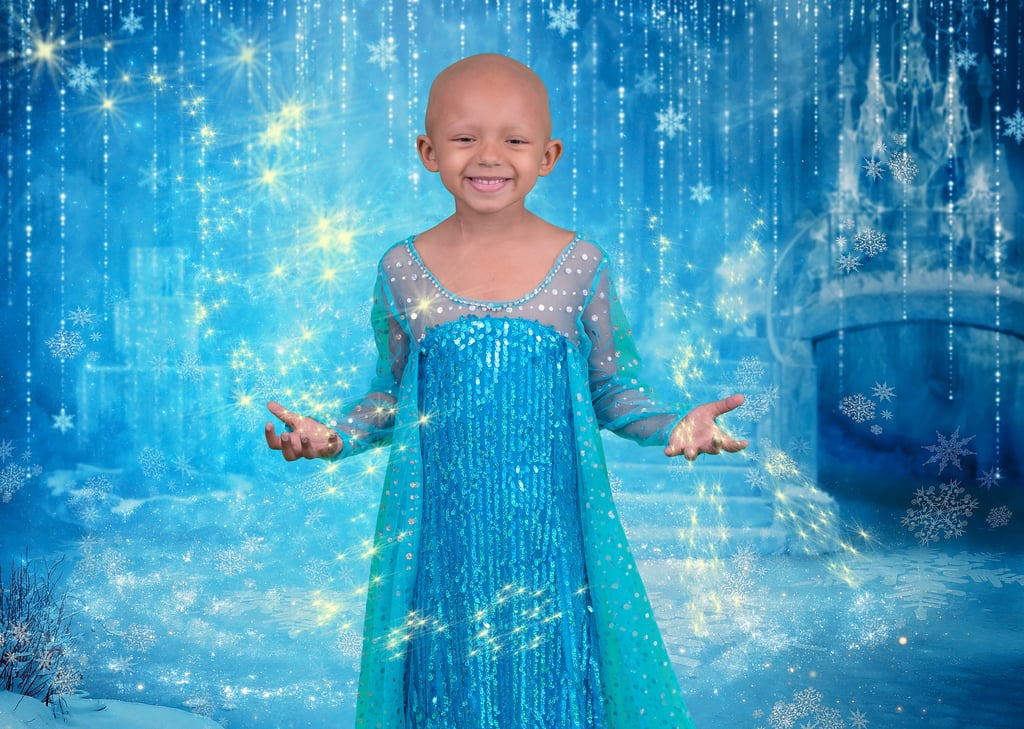 Snow White once sang, "When the raindrops come tumbling, remember you're the one who can fill the world with sunshine." For 5-year-old Arianna Taft from Rhode Island, who lives with an aggressive form of kidney cancer, the song lyrics ring true because her enchanting Disney princess photo shoot has me smiling from ear-to-ear. "To see her dressed as her favorite magical princess and all the other ones is just incredible," Arianna's father Ryan Taft told People (the TV Show!). "I look at the photos and I know it's Ari, I know it's my daughter, but it literally looks like she could be starring in her own movie, which is just super special and amazing."

"You hear cancer and you think all the bad things that are associated with it, but . . . she hasn't allowed a single day to be difficult."

For Arianna, who had a 13-centimeter tumor on her kidney, the shoot was a "bright spot" in her treatment process, allowing her to escape from her everyday health challenges and embrace her inner princess. "Her favorite movie is Frozen so she was definitely excited to be Elsa," photographer Ashley Richer told POPSUGAR via email. She adds that Arianna loved being Snow White so much she wore the costume on the drive home at the end of the shoot. Richer has been donating themed photo shoots to children with cancer since 2018, in memory of her son's 1-year-old friend, Lia, who died from the disease in 2017. Since 2010, Richer has endured her own medical challenges as a result of complications with her carotid artery and TIA strokes, but said, "I see now that all of that happened so that I can be here today helping to bring magic to these kids' lives."

Arianna has successfully undergone kidney surgery to remove her tumor, but the cancer remains on her "other kidney, her lungs, her liver, her lymph nodes." Despite this, Arianna continues to be strong and positive as she works toward completing her chemotherapy treatments. Through the non-profit A Wish Come True, Arianna will also visit the San Diego Zoo, where we expect she'll see bears, like in Brave, and maybe even a few of the forest creatures from Snow White.

"You hear cancer and you think all the bad things that are associated with it, but . . . she hasn't allowed a single day to be difficult," Ryan added. "You can't look at her and see what she's going through and not feed off of that strength . . . She's just representative of bald is beautiful and bald can be a Disney princess, and she's loving on every minute of it." See Arianna's stunning princess outfits — inspired by Merida, Snow White, Elsa, and Belle — here, and visit the A Wish Come True's website to find out more about how to share a little bit of magic with kids like Arianna.

Little Kids
Oof, the Internet Is Divided Over the First Glimpse at the New Clifford the Big Red Dog
by Chanel Vargas 3 days ago

Holiday For Kids
'Tis the Season on Disney Channel! All New Holiday Episodes Begin Airing on Nov. 28
by Alessia Santoro 3 days ago

Babies
These Disney Pregnancy Announcements Feature Baby Yoda, Woody, and Beyond!
by Murphy Moroney 5 days ago

Little Kids
This Mom's "How Kids Get Out of Cars" TikTok Series Is Every Friggin Child, My God
by Kate Schweitzer 1 week ago