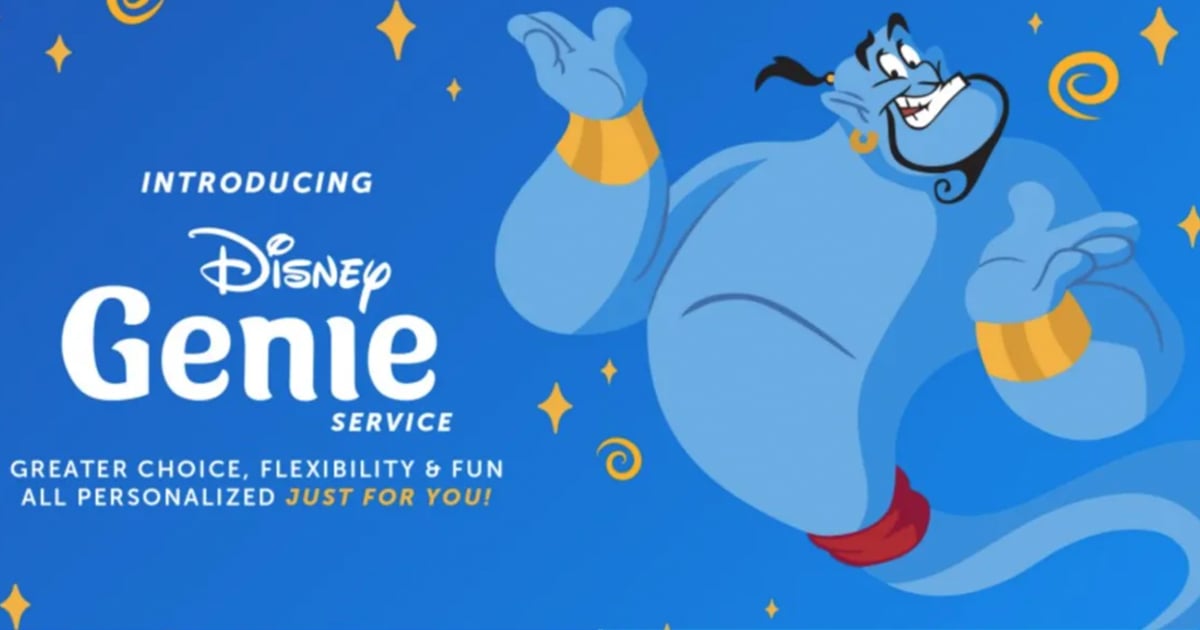 It's no secret that Disneyland has been overhauling the theme park experience that we all know and love in 2021. Since the new year, the Disney Parks have canceled their annual pass programs, introduced a new tiered ticket-pricing system, and recently announced new reservation-based annual passes. Next up on the list of changes: Disneyland and Walt Disney World announced on Aug. 18 that they will be retiring the FastPass, FastPass+, and MaxPass programs in favor of a new Disney Genie service that'll charge parkgoers extra for perks many families have come to depend on. Read ahead to find out more about the new Disney Genie and Disney Genie+ services before they go into effect this fall.

Disney Genie is a free planning tool that will automatically be included in My Disney Experience and in the Disneyland App for no extra cost. The service will provide a new personalized itinerary feature that recommends attractions, dining, and entertainment options based on guests' interests. The itineraries will continue to update throughout the day to allow for flexibility in planning and show predicted wait times for specific attractions. Disney Genie will also help guests order food, book reservations, secure spots in virtual ride queues, and get help from a virtual assistant. Rides like Rise of the Resistance, Web Slingers: A Spider-Man Adventure, and the upcoming Remy's Ratatouille Adventure will continue to have both paid and unpaid virtual queues, as well as traditional queues.

Like the MaxPass, Genie+ will allow guests in the park to choose specific arrival times, skip lines, and enter through new Lightning Lanes (aka FastPass lanes) for 15 select attractions, including the Haunted Mansion and the Millennium Falcon ride. Disneyland's Genie+ service will also provide augmented reality photo lenses and unlimited Disney PhotoPass downloads. Unlike MaxPass, the Genie+ services will only be available to parkgoers for a fee of $20 per ticket per day at Disneyland.

Available for $15 per ticket per day at Walt Disney World, Genie+ will provide guests in the park the opportunity to skip lines, use Lightning Lanes, and choose arrival times for 40 select attractions throughout the park. While Walt Disney World's Genie+ service doesn't include PhotoPass, Disney hotel guests will be able to book return times and à la carte options beginning at 7 a.m. each day. Additionally, Genie+ can be purchased in advance of any park visits but cannot be added onto annual passes.

While pricing for the new Lightning Lanes has not been released yet, guests will be limited to two Lightning Lanes per day. Additionally, spots in line can only be reserved the day of a park visit, a rule that applies to Disney resort guests, annual PassHolders, and Magic Key holders. Disneyland and Walt Disney World will also offer individual à la carte Lightning Lane access sold separately from the Genie+ service for rides like the Seven Dwarfs Mine Train, Radiator Springs Racers, and other rides with virtual queues.

For more information about how to use the Disney Genie service, check out the Disney Parks video breakdown ahead.

Holiday For Kids
Keep the Change, Ya Filthy Animal: Stay at the Home Alone House For Less Than The Cost of a Pizza
by Kate Schweitzer 1 day ago

Family Travel
You Can Stay in The Grinch's Cave For Less Than $20 a Night — Did Your Heart Just Grow 3 Sizes, Too?
by Kate Schweitzer 2 days ago

Disney
Disney Collaborated With Latina-Owned Alamar Cosmetics For This Encanto Makeup Collection, and We Can Hardly Contain Ourselves
by Johanna Ferreira 2 weeks ago