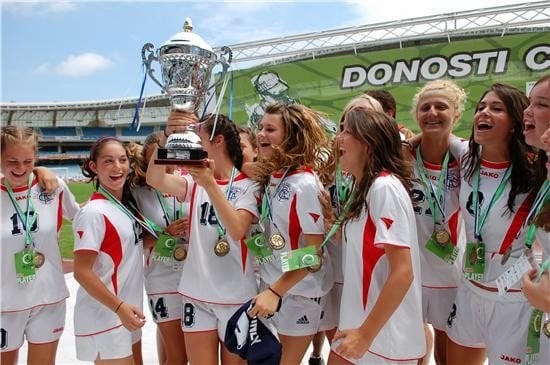 Over 10 years, I logged thousands (literally, thousands) of hours playing a combination of travel soccer and lacrosse . . . and that means that my parents were equally as involved. I was carted literally up and down the East Coast, to Europe, to California, and back again to compete with some of the best players in the country. Seems pretty cool, right? It was, but it was also a tremendous amount of work for everyone involved starting at age 7 or 8 all the way through high school.

Am I supergrateful? Of course. But if you have a kid who plays travel sports, you know how much work goes into getting them from point A to point B on time. And it only gets more intense as time goes on. It's a lot of dollars spent and hours logged for both the players and their parents.

Is your child headed toward travel sports? Here's what to know before you make the jump from your town's rec program to a full-blown travel team from someone who's been through it.

Remember: meeting a goal feels great. Just make sure your child takes time to celebrate his or her victories before simply focusing on the next obstacle to overcome.

Braids
I Was Scared to Wear Braids to Work, but Now I Couldn't Be Happier That I Did
by Karis Stephen 18 hours ago

Simone Biles
As a Parent, Here's the Only Response I Have About Simone Biles Walking Away
by Kate Schweitzer 6 days ago