When Sophia Abuabara got dressed for school on a day she had three big exams, she had no idea that her outfit was going to cause such an uproar. The 17-year-old San Antonio student's mother is speaking out after school officials called out her daughter for allegedly violating the dress code on a day she was already so stressed.

Rosey Abuabara took to Facebook to explain the situation. "What is more important here? My daughters skirt length, or her PHYSICS AP TEST SCORE?" she wrote. "She also had an APUSH [Advanced Placement U.S. history] test, and a LATIN 3 test, back to back. Don't understand how this is a dress code violation. She's 5'9". It's hard to find anything that fits longer."

Sophia called her mother crying after she was lectured by Tom C. Clark High School's vice principal, who said that her mom had to bring a pair of pants to school for her daughter. Rosey rushed to her daughter's school, but refused to bring a change of clothes because she didn't want to cause her daughter any more stress on a day she was taking three incredibly difficult exams.

So, why is this such an issue if Sophia was violating the dress code? Well, that's the problem — she wasn't. The school policy requires that clothing fall "no more than four inches above the top of the kneecap," and Sophia's dress did not do that. Rosey measured her daughter's dress, as she always does when shopping for new clothes, and it was the appropriate length. Rosey told Today that Principal Dr. Jerry Woods said the measurement was irrelevant because "he said what mattered was the judgment call from the administrator." 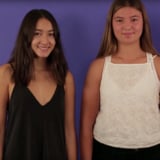 Young Girls on School Dress Codes and Being "Distractions" to Boys

"He was really concerned about my daughter getting pictures taken of her climbing up stairs," Rosey said. "Well, she's going to climb up stairs when she's in college. I don't know. It got kind of crazy."

Although Sophia had worn this dress multiple times prior, the administrators did not approve on this day. Rosey explained in a Facebook video that she was escorted off of the school grounds, but Sophia was allowed to stay and finish her exams. However, the principal did try to take her out of her Latin test, a distraction no student should have to deal with that during an exam. "My daughter is number one in her class," Rosey said in the video. "She is class president, she has raised thousands of dollars for the school prom . . . [but] apparently the length of her skirt is more important than her education."

Barry Perez, a spokesperson for the school district issued a statement saying: "This issue was addressed by campus administrators in a manner consistent with other dress code concerns on their campus. The student was not taken out of class during a test. She visited with a campus administrator after her test was completed. No disciplinary action was issued. Campus administrators have met with the student and her parents to discuss the matter and it has been resolved."

No student should have to deal with the embarrassment and stress that Sophia dealt with. Her mother says, "they shamed my daughter."

Family Life
My Mother Was Always Melancholy In September, and Now I Understand Why
by Kate Schweitzer 20 hours ago