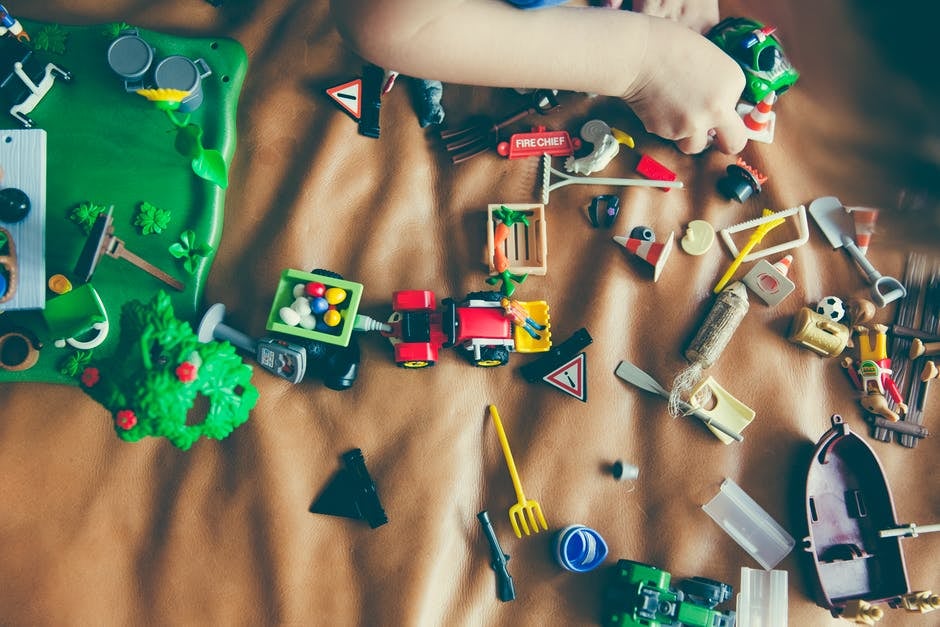 When you have babies, chances are all of their baby stuff clutters the crap out of your home. And as they get older, things only get more crowded. There are toys, books, dreaded Lego sets left on the floor for a middle-of-the-night foot injury, and so much more. That once picture-perfect dream I had of my stylish and clean house flew right out the window the second my firstborn came home from the hospital (probably even before with the waves of stuff to prepare). I used to long to have my adult living space back, or, at the very least, a small corner of it. I tried everything to get our family room back in order, but honestly, I've given up.

That lasted for, oh, maybe a few weeks before I surrendered in utter defeat. The kids' things kept appearing all over the house as if by magic.

The very nice and this-will-be-easy thought of having a designated play area in the house to keep the kid tornado contained was just that — a nice thought. I tried dubbing our family room and a few other areas "kid-free zones," which meant my two kids had to keep their stuff out of them. I tried putting all of their toys, including train sets, a mini-trampoline, and the play kitchen, in our basement. Out of sight, out of mind, right? Wrong. That lasted for, oh, maybe a few weeks before I surrendered in utter defeat. The kids' things kept appearing all over the house as if by magic.

Related:
I'm Afraid That My Cleaning Obsession Is Preventing Me From Enjoying My Kids

Then I tried something I swore I would never do: putting their toys in their bedrooms. I had a vision that their rooms would be a peaceful place meant for sleeping, dreaming, and reading the occasional book, but as most moms know, you say "screw it" more times than you ever thought you would. And what happened? Yep, you guessed it. Toys. Everywhere.

After months of shuffling crap into different rooms and trying to come up with a magical solution, I gave up. And then I realized something: my kids don't want to play with their toys in the solitude of their own rooms or even down in the basement — they want to be close to me and my husband. They're kids, after all. Kids who long for the comfort that their parents bring. They want us to watch and listen to the fun games they think up, and they hope we'll join in on the fun, too. They want us to get on the floor of the family room — the room we all spend the most time in — and play make-believe together. That's when I realized that their toys belong in the family room.

Related:
The 1 Laundry Hack I Swear by That Instantly Changed My Life

Do I still long for my adult space and carefully thought-out decor to come back? Of course. Do I still try and clean things up? Every day. But do I agonize over toys being found all over the house? No. My kids are only little once, and I know one day I'll have my adult family room back to normal and long for the mess. There will be no baby swings, dolls, or Legos to step on. Yes, my house will be cleaner, more organized, and maybe a little bit more beautiful, but I certainly won't feel any happier. Quite the opposite, I'm sure. So for now, I'll relish not having a designated play area for my kids, because those toys are just a reminder of how much love is in our house.

Dogs
Though My Dog Was Dying When I Adopted Him, Saying Goodbye Was Still Heartbreaking
by Ashley Ortiz 20 hours ago