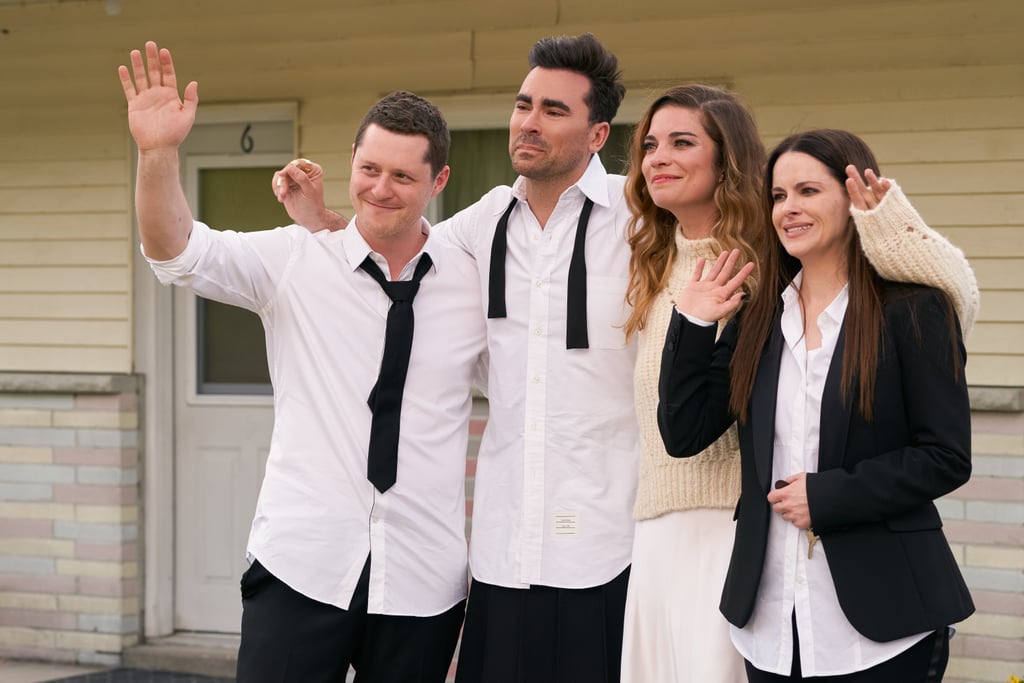 After six highly entertaining, distinctly quotable seasons, Schitt's Creek has come to an end, and no matter how many times I told myself, "don't cry because it's over; smile because it happened," I'm still sobbing. The Pop TV comedy wrapped up in simply the best way possible: David Rose and Patrick Brewer got their "happy ending," a perfectly eccentric wedding in the town hall, before Moira and Johnny Rose bid farewell to their children and the Rosebud Motel to head to California.

Of course, Schitt's Creek fans weren't the only ones feeling a little bit emotional about the series finale. The cast members said their goodbyes and celebrated their tight, six-year bond by sharing heartfelt messages and photos on social media the night of the final episode and subsequent documentary special — which they all adorably watched together via Zoom, might I add. Dan Levy (David Rose) shared a lengthy note honoring the show's "brilliant cast and crew," along with a handful of incredible behind-the-scenes photos on his Instagram Stories. Meanwhile, Emily Hampshire (Stevie Budd) posted a teary-eyed selfie with the key for Room 7 of the Rosebud Motel, aka the room Johnny and Moira Rose stayed in before moving.

Ahead, read through every single farewell post shared by the Schitt's Creek cast so far, and then read up on what some of the stars are up to next.

Celebrity Instagrams
Naomi Ackie Powerfully Reacts to BAFTA Nod: The "Embracing of Joy Is a Small Act of Rebellion"
by Brea Cubit 1 day ago

Dwayne Johnson
Dwayne Johnson Seemingly Calls Out President Trump in Impassioned Video: "Where Are You?"
by Monica Sisavat 1 day ago

Celebrity Instagrams
In a Powerful Moment, Amber Riley Led a Sing-Along to Beyoncé's "Freedom" at an LA Protest
by Monica Sisavat 2 days ago