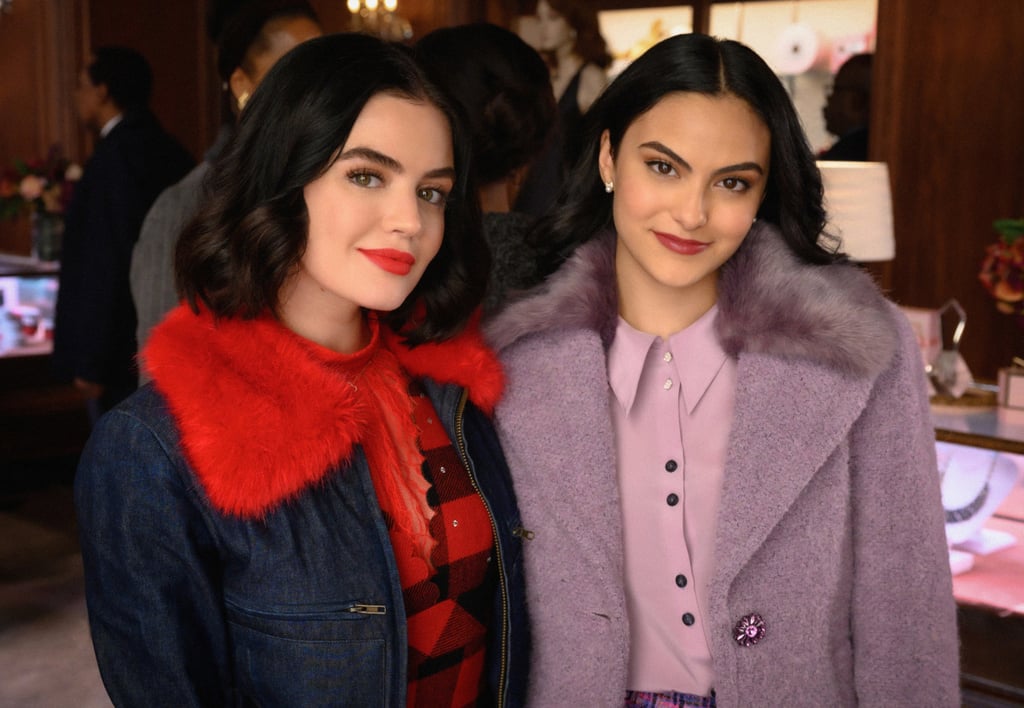 Veronica Lodge is leaving the trials and tribulations of Riverdale to return to her old stomping grounds in NYC! Not permanently, of course, just for a delightful crossover episode introducing the star of Riverdale's upcoming spinoff series, Katy Keene.

Lucy Hale's titular character will guest star on the Feb. 5 episode of Riverdale in which Veronica (Camila Mendes) heads back to NYC and runs into her old friend. In one of the recently released photos, the two young women hold hands while having a serious looking chat in a bar. Another shows them inside Lacy's, the department store where Katy Keene is fabulously employed. To the surprise of absolutely no one, both Katy and Veronica look so chic, they're giving the original New York queen bees a run for their money!

Executive producers Roberto Aguirre-Sacasa and Michael Grassi first announced the crossover episode back in December, with Aguirre-Sacasa also posting a behind-the-scenes shot of filming on his Twitter page.

The news is out! Veronica’s going to NYC and #Katykeene is coming to #Riverdale! So excited for our first #Archiverse crossover!! ❤️🎁💎📸✈️🎭🏆🔥👗👠🧶💃🏻👯‍♀️ pic.twitter.com/xXVMBTnltq

"Before Katy Keene officially premieres, we all thought it would be super-fun to do a crossover that took Veronica to Katy's world — New York City — and established Katy in the Riverdale universe," Aguirre-Sacasa and Grassi said in a statement. "For our first Riverdale/Katy crossover, we couldn't be more excited that it's old friends Veronica and Katy—Cami and Lucy—having fun and heart-to-hearts!"

We have to admit, we're already loving the looks of it! Check out all the photos we've gotten of the Archieverse crossover episode ahead, and make sure to tune in for the Veronica/Katy reunion on Feb. 5. Then check out the premiere of Katy Keene on Feb. 6!

TV
Who Is the Sun on The Masked Singer? We Have Some Bright Ideas
by Kelsie Gibson 2 hours ago

Netflix
Despite Also Being Terrifying, The Haunting of Bly Manor Isn't a Sequel to Hill House
by Mekishana Pierre 7 hours ago

Netflix
The Haunting of Bly Manor Isn't Inspired by a Real Place, but We Do Know Where They Filmed
by Amanda Prahl 2 days ago