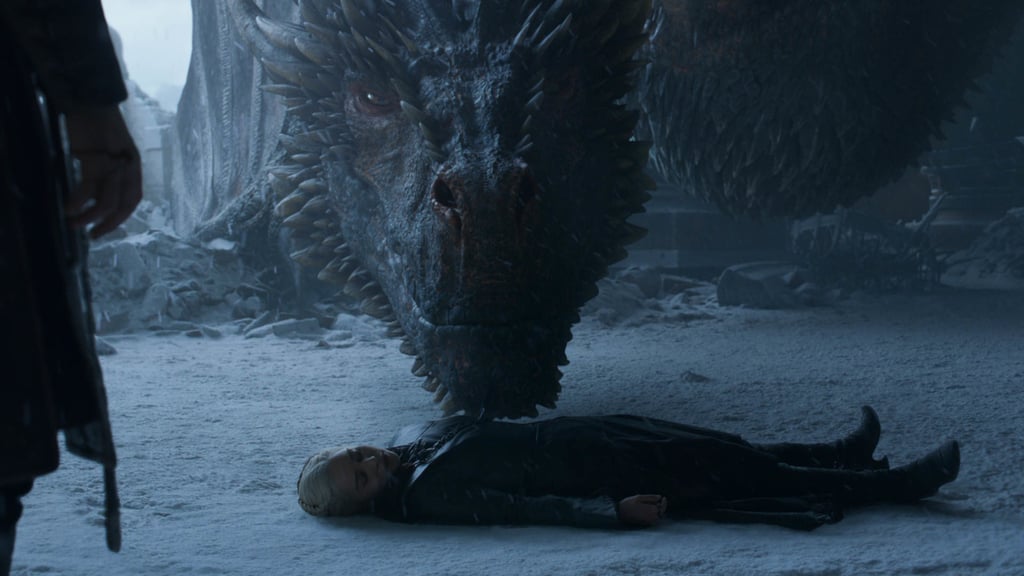 What Happens to Daenerys (and Drogon)?

If you've been a long-suffering member of #TeamDany, then we have some bad news: the Dragon Queen is no more. What's worse? She's murdered by her nephew/boyfriend, Jon Snow.

In the aftermath of her fiery reign of terror in King's Landing, Daenerys orders her men to kill all the remaining Lannister soldiers in the city, regardless of if they've surrendered or not. While Jon and Tyrion oppose this tyrannical course of action, Grey Worm eagerly carries out her orders. Dany later makes a speech boasting about how she's freed the people of King's Landing, and now intends to free those imprisoned throughout the rest of the world so she can further "break the wheel." And then, because all bets are off, she tosses Tyrion in prison for treason (for helping Jaime escape). Kind of ironic when you consider he just did the same to Varys, but we digress.

Seeing the ruthless extent of Dany's power now that she's claimed the Iron Throne — and knowing that he and his family will always be in danger because he threatens her legitimacy — Jon decides to visit his former boo while she's exploring the throne room all by her lonesome and set her straight . . . and by that, of course, we mean he straight-up stabs her after he begs her to end the madness and she refuses. Needless to say, it's an extremely disappointing end to Daenerys Targaryen. The fact that Dany, one of the show's few female characters (and also one of its most badass characters in general), goes out in such a lame, anticlimactic fashion at the hands of a man (who claimed to love her, FYI) is just . . . well, lame.

Drogon saunters over and proceeds to melt the Iron Throne, then carries Dany's lifeless body away with him. Where does he take her? Well, it's unclear. Bran does mention later on in the episode that he'll "find" Drogon, so we assume that he'll keep an eye on the creature in case he decides to start munching on the good people of Westeros in retaliation for his mother's murder.

Schitt's Creek
Schitt's Creek Mugs Featuring the Rose Family? We Love That Coffee Journey For You
by Sydni Ellis 23 hours ago

Friends
Gabrielle Union Is Hosting an All-Black Friends Reading, and the Cast List Is Stacked
by Kelsie Gibson 19 hours ago

by Haley Lyndes 17 hours ago