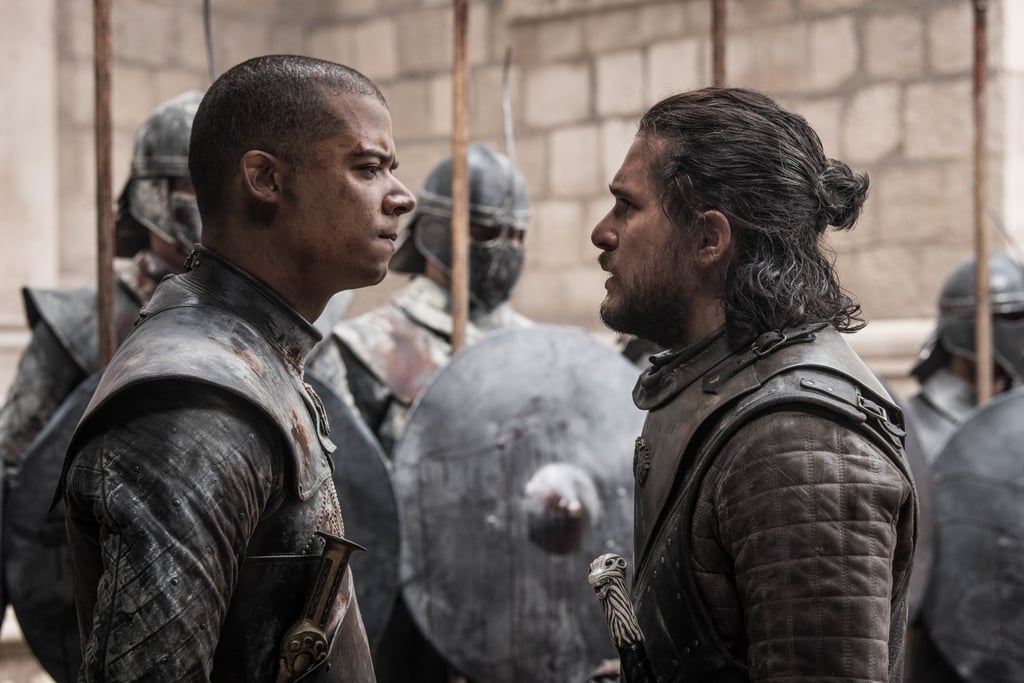 The Aftermath of the Battle of King's Landing

The episode opens as Jon, Davos, and Tyrion walk through the devastation left after Daenerys and Drogon's fiery adventure above King's Landing. As Jon and Davos walk through the rubble, the duo comes across Grey Worm and the Unsullied preparing to kill a group of unarmed Lannister soldiers. When Jon tries to stop Grey Worm from killing the men, the commander reveals that he acts on the orders of the Queen, unsettling both Jon and Davos. The two begin to realize that Daenerys no longer worries about being benevolent and the bloodshed isn't over yet. Off on his own, Tyrion unearths the bodies of Cersei and Jaime, confirming that he is the last Lannister left.

Daenerys triumphantly surveys what remains of her Dothraki and Unsullied soldiers, as fires in King's Landing continue to smoke in the distance. She walks out to greet her gathered forces with Drogon perched atop a destroyed Red Keep behind her, a show of power that lets everyone know that the Dragon Queen walks among them. Daenerys gives a speech worthy of any conqueror, glamorizing her destructive actions as her freeing the people of King's Landing from tyranny. She tells them that she means to free the rest of the world much as she has Westeros (which is a positively chilling thought), asking her army, "Will you break the wheel with me?"

Speech over, Daenerys turns to Tyrion and reveals that she knows he freed Jaime, allowing the Kingslayer to escape after her men caught him trying to sneak into King's Landing. She accuses Tyrion of committing treason, which infuriates him. He tells her that she has killed thousands of innocent people and resigns from his position as her Hand, symbolically throwing the pin she gifted him with in season six. "I freed my brother. And you slaughtered a city," he says.

Enraged, Daenerys calls to her men to take him to prison, where he will presumably wait to be executed for treason like Varys before him. As she walks away, Jon is faced with Arya, who mysteriously made her way up the keep stairs. "I know a killer when I see one," she warns her cousin.