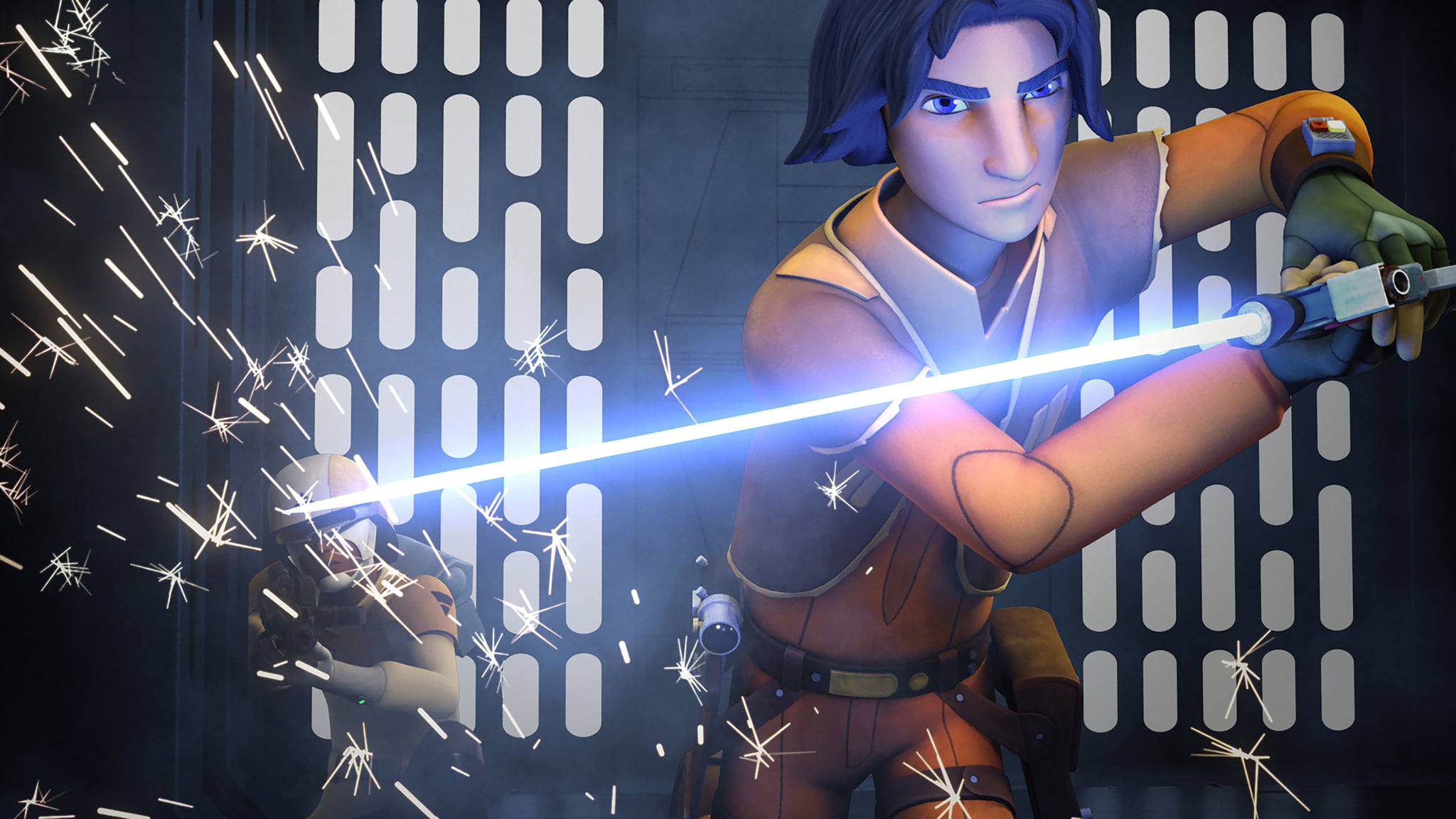 Baby Yoda's backstory — and name! — have finally been revealed on The Mandalorian, which raises a new question: who's going to train Grogu? Thanks to a few oblique hints in the most recent episode, and the presence of the surviving Jedi Ahsoka Tano, we've got at least one theory: Ezra Bridger, a powerful Jedi friend of Ahsoka's from the animated Star Wars Rebels TV show. It's far from confirmed, but we think there are a few clues that hint how Ezra might make a major return and assist Grogu in learning to use the Force.

The first indirect hint that Ezra may play into The Mandalorian comes when Ahsoka defeats the episode's baddie, Imperial loyalist Morgan Elsbeth, in a one-on-one battle. She demands to know the location of Elsbeth's "master" — Grand Admiral Thrawn, a big-time Imperial villain best known for being one of the main antagonists in Star Wars Rebels. When he was last seen on-screen, he and Ezra were both on an Imperial ship that got yanked into deep space. Ahsoka's mention of Thrawn suggests that the ship survived its journey, and if it did, Ezra could very well be alive out there somewhere.

Later in the episode, when Ahsoka refuses to train Grogu, she offers up a bit of hope, telling Din Djarin to take Grogu to the ancient planet of Tython. There, she explains, Grogu can reach out with the Force, sending out a sort of beacon or call for help that could be heard by any Jedi who are out there and able to hear his call — although, Ahsoka reminds him, there aren't many Jedi left. In fact, at this point in the Star Wars timeline, there are barely any known living Jedi, with the Empire's purge having killed all the Jedi or chased them into hiding. The most notable are Luke Skywalker and Leia Organa, as well as Ahsoka herself, none of whom are candidates to be Grogu's teacher.

There are, presumably, other Jedi who escaped the Purge and survived the Rebellion, but Ahsoka's presence and the reference to Thrawn have lots of viewers wondering if Ezra might wind up being the Jedi who hears Grogu's call. After all, he'd make a pretty good choice, narrative-wise. He's a known character from the Rebels series, but he's not an iconic character from the mainline movies, and he'd be around a good age to be a teacher (the Rebels continuity reveals that he, like Luke and Leia, was born the year of Anakin Skywalker's fall, placing him around age thirty during The Mandalorian). Most importantly, he's something of a narrative blank slate for the future: he's not referenced in the sequel trilogy movies, and he's not even one of the Jedi voices who appear to Rey in The Rise of Skywalker, meaning his future is completely unknown. Who better to join the cast and train Grogu than a popular character with a mysterious storyline?

One final hint that Ezra may be on his way? Back in September, The Haunting of Bly Manor star Rahul Kohli made a joking tweet that seemed to suggest he was hoping to play a live-action Ezra. "I've gotten into that Lothal orphan, force sensitive, trained by Kanan Jarrus kind of shape. For no particular reason," he tweeted. He later clarified to Inverse that, no, he wasn't actually playing Ezra — but that industry rumors were already swirling that the show was looking to cast the character. "I was trolling. I heard rumors that there was a casting call looking for a live-action Ezra that was looking for Asian actors in their late twenties, early thirties," he explained. Perhaps it won't be long before those rumors come true!