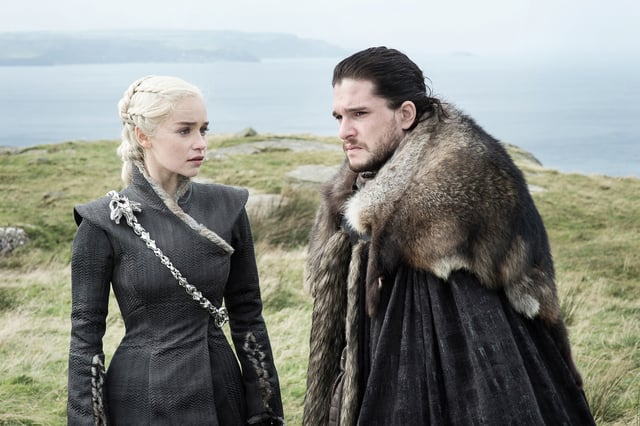 Image Source: Helen Sloan / Courtesy of HBO
It's been nearly two years since the Game of Thrones series finale disappointed a large majority of the fandom, yet fans still have hope HBO could be giving us the ending we deserve. It all started on April 6, when HBO released a new recap trailer for the show's eighth and final season, showcasing moments from the season that left fans both overjoyed and enraged. Not only did the recap trailer remind fans of how great season eight could've been, it also renewed calls for HBO to remake GOT's final season. The official GOT account tweeted on April 14, "Winter is coming," leading many to believe HBO could finally be giving in to fans' demands.

Prior to the release of the Snyder Cut of Justice League, the thought that HBO would remake any part of GOT was almost laughable. Now, the idea of Kit Harrington and Emilia Clarke getting together for a couple of reshoots to fix their ending doesn't seem all that farfetched. Granted, remaking any part of Game of Thrones season eight would be a very different situation from the Snyder Cut; which was primarily composed of previously shot footage and was restoring director Zack Snyder's original vision. Not only have the cast and crew of GOT moved on to other projects, but HBO is already working on the Targaryen-focused prequel, House of Dragons. Besides, trying to get everyone together again would be both difficult and expensive. Then again, we do know that a number of the cast were also disappointed with the show's ending and could potentially be swayed to come back if the timing and script were right.

So is HBO hinting at the fact that a remake of season eight or the series finale is in the works? Unfortunately, it doesn't seem like it. Game of Thrones celebrates its 10th anniversary this year and the new trailer and cryptic tweets are probably just a way to drum up excitement for 10 years of the show. Still, not all hope is quite lost as author George R.R. Martin has two books left to finish in his A Song of Ice and Fire series, which Game of Thrones is based on. The eventual ending will likely be different from what was seen onscreen and could call for an entirely new limited series to be made.