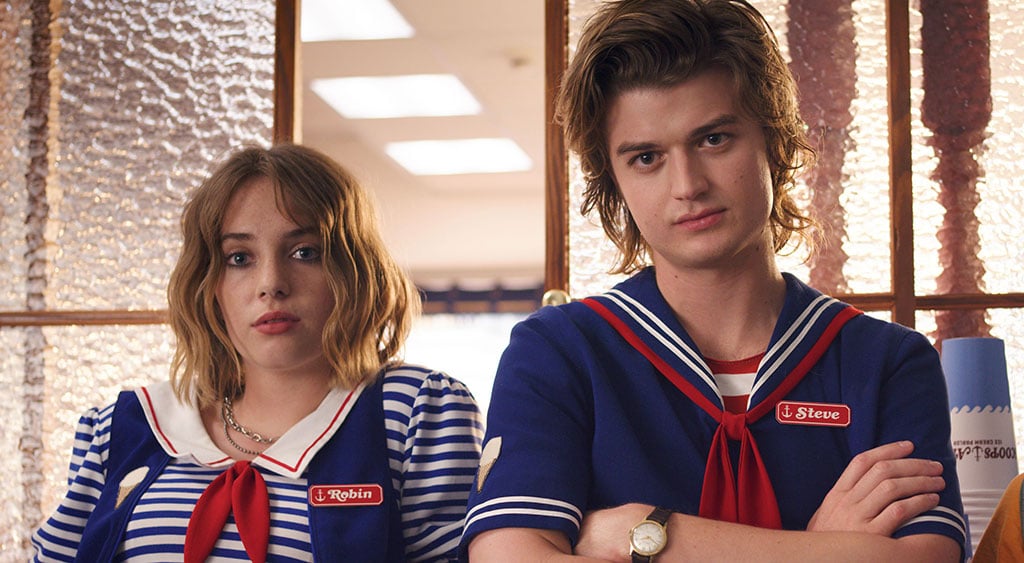 If you ask me, it's never too early to start planning out your Halloween costume. Usually that's because I go all-out with some DIY, handmade monstrosity, but if that's not your jam and you also happen to be a Stranger Things fan, Spirit Halloween is here for you — the popular online retailer has already started selling Scoops Ahoy costumes so you can go as new kid on the block Robin or the world's best babysitter Steve Harrington without lifting a finger (well, you'll need at least one finger to click 'purchase,' I guess).

If you haven't yet binged season three of Netflix's sci-fi hit, then allow me to catch you up: Steve starts working at the new mall's ice cream joint, Scoops Ahoy, where he meets his surly coworker Robin. Despite a rough start, the pair soon form an unbreakable friendship thanks to a little interference from Russian spies and a Mind Flayer or two. (Getting drugged and almost dying bonds you for life, apparently.) They spend all of these near-death experiences wearing their Scoops Ahoy uniforms, which are bright blue with white stripes and red accents, to fully give off that nautical feel. (Nothing says "delicious frozen dairy products" than the high seas!)

Sound like something you want to romp around in come October? Then keep scrolling to see where you can pick up a Steve and Robin costume for yourself.

Netflix
How Aaron Hernandez's Twisted Story Impacted the Life of His Cousin, Tanya Singleton
by Sabienna Bowman 19 hours ago