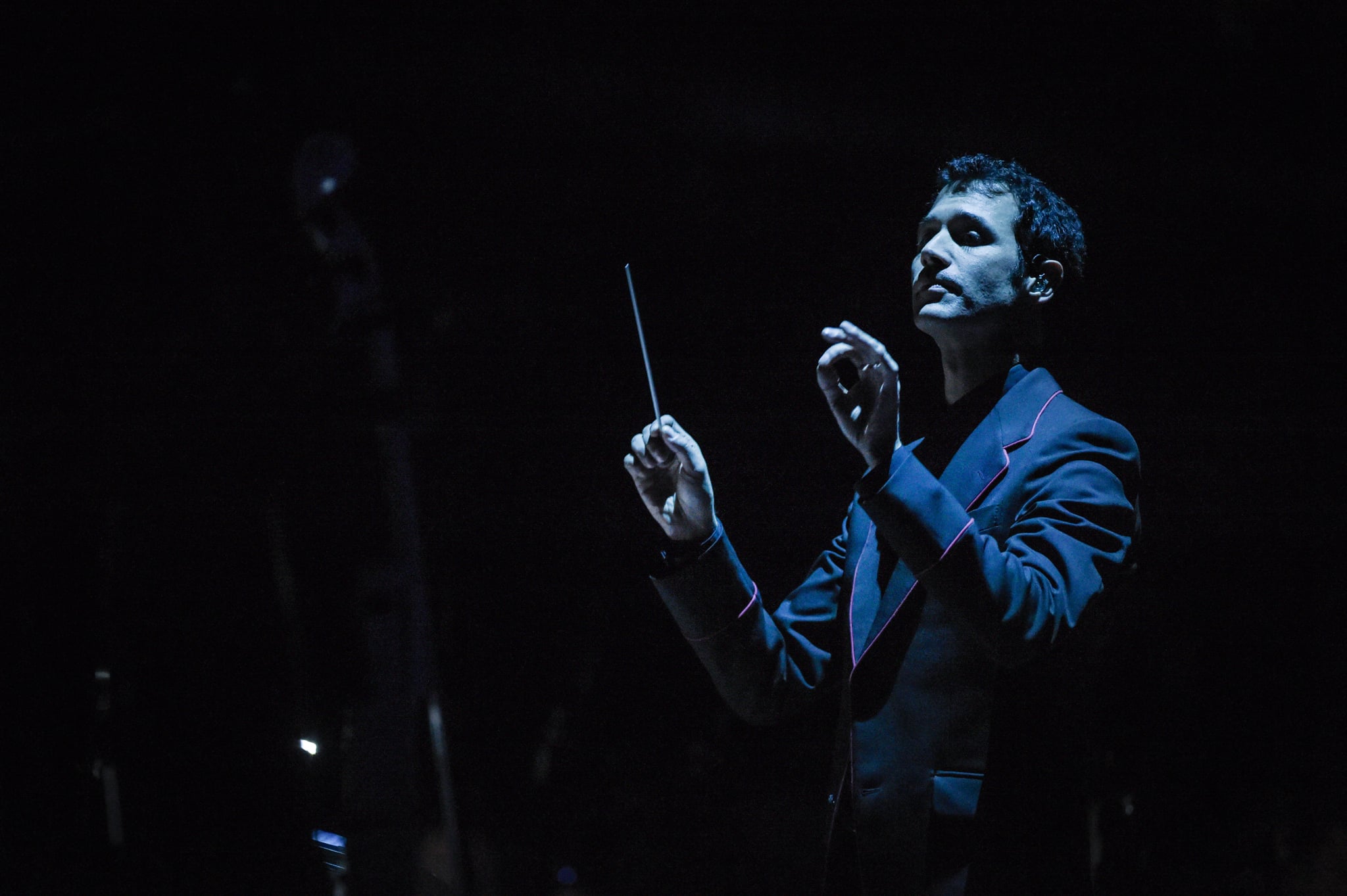 Over the last seven years, it's become clear that the Game of Thrones theme song is on track to become as iconic as John Williams's highly recognizable themes for Star Wars or Jurassic Park. It's not uncommon to be walking through a grocery store when all of a sudden someone's ringtone blasts the sounds of Westeros through the aisles, or you find yourself absentmindedly humming the opening notes as you drive along the highway. In fact, it's in exactly the latter scenario where composer Ramin Djawadi — who has worked on everything from shows like Game of Thrones and Westworld to blockbusters like A Wrinkle in Time — first came up with the song, a theme that will play for the last six times when GOT airs its eighth and final season next year.

But in the meantime, the German-Iranian musician is keeping busy. The score for the HBO series has become so popular that he tours the country with a full orchestra for Game of Thrones Live, a sensory concert experience that brings many of the show's most exciting scenes to life with the help of colorful smoke, blasts of fire, and elaborate costumes. Getting to play his songs on stage himself, as green flames explode around him in front of thousands of screaming fans, has become just as normal for him as, say, figuring out how to play a Shamisen in hopes of giving a well-known modern song a brand-new spin for his other big HBO project, Westworld.

When I hopped on the phone with Djawadi recently, it was clear that though his career has split into what seems like a thousand different directions, it all boils down to one thing: sharing his passion for music with the world. Ahead, see what he had to say about everything from those wildly popular Westworld covers to his thoughts on Game of Thrones season eight.

Related:
Let's All Give Westworld's Season 2 Soundtrack a Round of Applause

POPSUGAR: So I wanted to start off by talking a little bit about Westworld, since the finale was a few weeks ago. Your music has kind of become a character in and of itself within the show, especially with elements like the player piano. Was that something that you anticipated when you started composing for it?

Ramin Djawadi: Not at all, actually. And I think that's probably . . . most of the things that I do when I'm writing, I never really anticipate anything or think about what it is that music will trigger. And this one definitely, for sure, was a pleasant surprise. I always looked at it like, "Oh, this is going to be a little subconscious Easter egg that people maybe might not notice." And then when the episodes started airing, I saw how excited people got about it. It was mind-blowing. It was absolutely incredible.

PS: And kind of similar to that, every time that there's been a cover of a modern song that you've slipped in there, fans kind of freak out about it. In a good way, obviously. Can you tell me a little bit about your process for how you narrow down which modern covers to mix in with the classical music?

RD: I have to give full credit to Jonathan Nolan, our showrunner, actually. He's the one who usually comes up with the songs and placement. And then he sends me off and says, "OK. Do an arrangement and play around with it." Then I get to be creative with it. And especially, the second season now, it's been a lot of fun with pushing the season further. Not only having the player piano, but doing the Indian version, or being in Shogun World using shamisen and shakuhachi, just even different instrumentation. I feel like we really pushed it further this season. It's been a lot of fun doing it.

PS: For the different worlds the show dove into this season, did you have a personal favorite to write for?

PS: I mean, all of the instruments that you've used over the years, including in Game of Thrones — I think there was one song that used a didgeridoo, no?

PS: At this point, is there any instrument out there that you haven't used thus far that you would like to give a try in upcoming episodes?

RD: That's a good question, actually. The instrumentation has definitely become very wide over the years now. I'm sure there is something that I have not used yet. A lot of it is also triggered by when I actually have the visuals in front of me. And then I can assess what I actually need or what's the new thing to do. Yeah, let's see what's next.

PS: So when you're approaching doing the score for a show like Westworld versus Game of Thrones, is the process relatively the same?

RD: I would say they're pretty much the same. In terms of my approach, I like to talk to the showrunners. Sit in a room with them. It's really a lot of just talking and conversations, first off. What is it they envision with their show, and musically what do they want? Many times they have ideas of what they want to incorporate. And I feel like it's my job to put that into music. So, I really treat every project the same that way. And then actually once you conceptually talk about it, then it really gets into the, "Okay, now what are the notes I'm actually going to write? What instrumentation?" And then you get into that whole part. And yeah, Game of Thrones and Westworld, they couldn't be more different in that field, musically. But that's also something I enjoy when you have projects that are really quite different from another.

PS: I imagine for these high-profile shows, which are so secret to the point that scripts supposedly self-destruct now, that getting the chance to actually watch these scenes before they premiere is pretty cool. Do you watch the footage before you start composing, or is it more of conversations with the showrunner to get the feel for things, and then later on tweaking after you see it?

RD: I actually get the episodes, so I can really write specifically to the scene and to the picture. And we do what's called a spotting session, where they come in and we sit down and actually watch it together. That's really when a lot of the conversation starts. It's very detail-oriented, where we even decide where music should start and stop. That all gets discussed. And then I get to write all the music, they'll come back, and then I play them all the music again. Then we tweak it together. So, it's a big process for all the episodes we do. But yeah, I definitely get to see it early.

PS: You've done such iconic work for Game of Thrones thus far, so was there any stress on your part about how you were going to elevate the score for the final season? I don't know if you've started writing the music yet or not . . .

RD: Actually, I haven't started yet. I haven't seen anything yet, either. No, it's . . . I'm still in the dark about how it's going to end. I'm honestly also super excited about it. I'm super pumped about writing. Musically, obviously, this is it now, right? So I have to see how . . . I'm curious to see what the story will tell me of how I'm going to write the music, and how I will put the final touches on it. This amazing eighth season run. I'm very, very curious.

PS: Personally, the Game of Thrones season six finale score, "Light of the Seven," is one of my favorite television scores in recent memory. I was just wondering if you had your own personal favorite, from either Westworld or Game of Thrones? Whether that's writing or performing it.

RD: That's definitely one of them. I think that one just also stands out because it is so, so different from the rest of the scores. So automatically, it really is like a stand-alone piece. I would say the main title is also one of them. Same in Westworld. The main title is very close to my heart.

PS: For the Games of Thrones live show, one of the things that I think is so incredible about it is that it brings in people who might not have considered themselves fans of classical or orchestral music, necessarily. Has that been exciting to see for you as a composer?

RD: Yeah, I think that was always part of my intention. I'm glad to see it working, actually, because I always wanted a little bit of a hybrid show. It is orchestral instrumental music, but we kind of beast it up a bit, I feel. We put pyro in and lighting, and all kinds of things happen on stage. I was hoping that that would get people excited and come in and see a great summary of their favorite show.

PS: I was blown away seeing all of the pyro, especially the green smoke effect that happens for "Light of the Seven." I know you actually get to perform for that one, which must be special for you.

RD: "Light of the Seven" is definitely one of my favorites. The rest of the show, most of the show, I conduct. But this one I actually get to play myself. When the smoke starts and that whole stage blows up, I'm actually right in the center of it. That's fun to do every night. And, yeah again, the intention of the show was always to get this immersive experience. Really make the fans feel like they're there, and make the scenes and the moments really come alive. So with these effects, like blowing up the stage like that, even for myself it really puts me right in it. I get to enjoy it every night, too. It brings a kind of contemporary element, I think, to a live show like that.

PS: So with Game of Thrones ending — I know that you've done scores for everything, TV, movies, and you're doing the live show — but when Game of Thrones ends, do you have any plans for your next project? Maybe something totally different?

RD: Well, I always try to do different projects. I really like to jump around, stylistically quite a bit. We'll see what comes next, if there's another tour. I mean, a lot of people actually have asked me, "Hey, the Game of Thrones tour is so much fun. It's so cool. You should do a Westworld tour." So that's definitely been something on my mind, because performing live is something I usually don't really do, but it's been so much fun. Being out there and being with the audience, it's something I really enjoy. Westworld season three's coming up, so there's definitely something that comes after Game of Thrones. Let's see what the future brings.

Eric Dane
Nate's Dad's DVD Is Missing on Euphoria — Who Took It?
by Toria Clarke 17 hours ago

Identity
Why Do Latinx Shows Keep Getting Canceled?
by Johanna Ferreira 18 hours ago