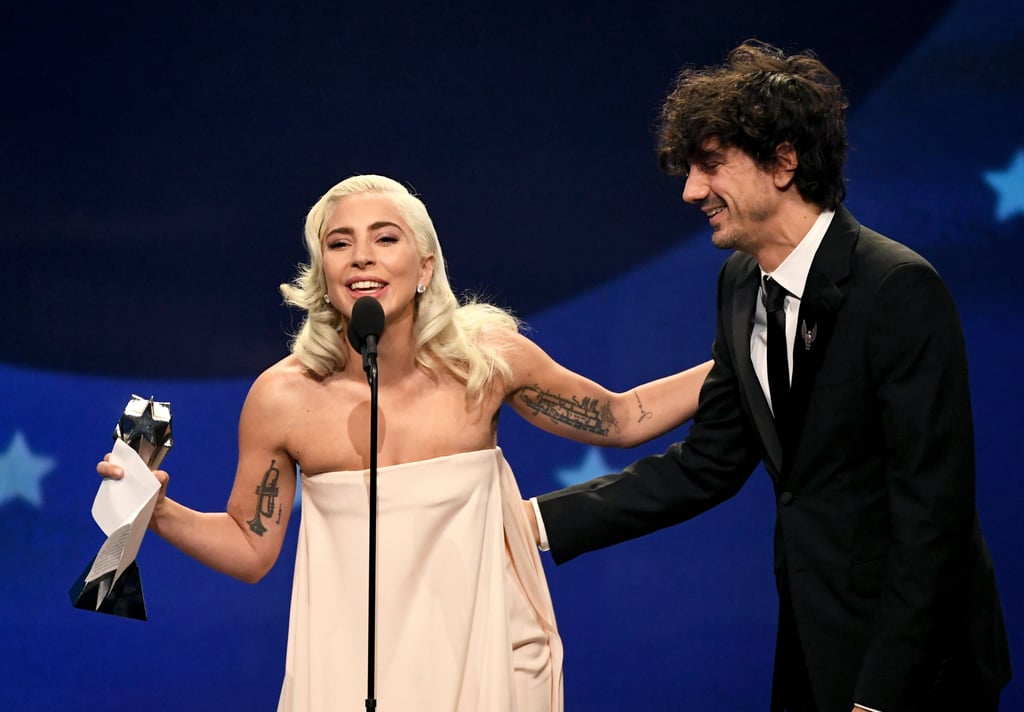 Lady Gaga knocked the socks off of pretty much everyone with her tour de force performance in A Star Is Born, which first hit theaters back in October. Now Bradley Cooper's musical drama has won another award for best song, and Gaga's acceptance speech at the Critics' Choice Awards was naturally an emotional, heartfelt affair. Gaga, wearing a truly stunning light pink gown, made sure to call out her costar and director, as well as her cowriters.

"Thank you for this beautiful award. This means the world to us. I'll never forget when we wrote this song together with Mark Ronson and Andrew Wyatt," the 32-year-old actress told the audience, standing alongside songwriter Anthony Rossomando. "I'll never forget playing it for Bradley for the first time and seeing his face light up and then singing it live together, take after take . . . I was mesmerized both as myself and as my character Ally. I was basking in the brilliant transformation of Bradley into Jackson Maine, singing on his stage, and overwhelmed by the storytelling and power in his voice."

She went on to note the inspiration behind the song, which, if you've seen the film, is pretty beautiful. "This song is a conversation between men and women, asking each other questions about life . . . and the shallowness of a modern era," she said. "I'm so happy it resonated with you."

Scroll through photos from the Enigma star's acceptance speech ahead, then check out all the other lucky winners who took home an award at the big event on Sunday night.

Netflix
Confused by Synchronic's Ending? We've Broken It Down For You
by Grayson Gilcrease 1 day ago

Movies
The After Franchise Is Expanding! Get Ready For 2 More Movies
by Monica Sisavat 2 days ago