We all have that obnoxious relative we dread having to spend time with over the holidays. For ad executive Jack Sadelstein (Adam Sandler) in Jack and Jill, that relative is twin sister Jill (again, Adam Sandler), who visits her brother every Thanksgiving. Jill looks forward to spending time with Jack and his wife Erin (played by Katie Holmes in a sweet but bland role), as well as their two children every year. But Jill is harder to get along with, as she is loud (and she travels with an even louder pet cockatiel), incredibly needy, and she takes the time to point out others' flaws. It's no wonder Jack hates spending time with her, but it begs the question: If he doesn't want to, why should we? The answer, of course, is we shouldn't. 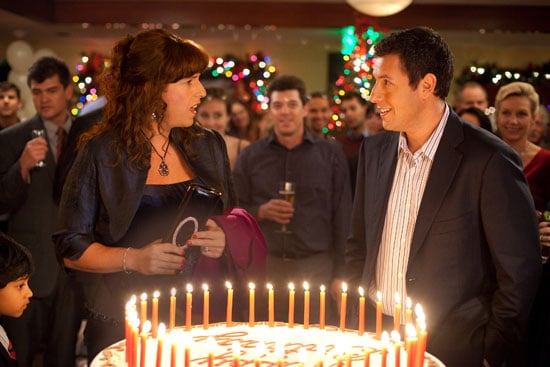 The fact that the film's humor rests on the novelty of seeing Sandler dressed as a woman should serve as a clue to the type of lazy humor you are going to get with this movie. Throwing a wig on Sandler and hearing him speak in a high-pitched voice isn't that funny, and neither are a lot of the jokes. To find out why else I found watching Sandler in drag to be a total drag, just keep reading.

Jill has the potential to elicit sympathy as a lonely, single woman desperate to reconnect with her brother and find love. But it's hard to take her seriously as a person when she spends the better half of the movie farting, scratching herself, and dealing with explosive diarrhea. It's toilet humor that is supposed to feel more inspired because a "woman" is the source of the flatulence. A bit more shocking — but similarly unfunny — is the racist humor from gardener Felipe (Eugenio Derbez), who glosses over it by following each punchline with "I'm kidding." 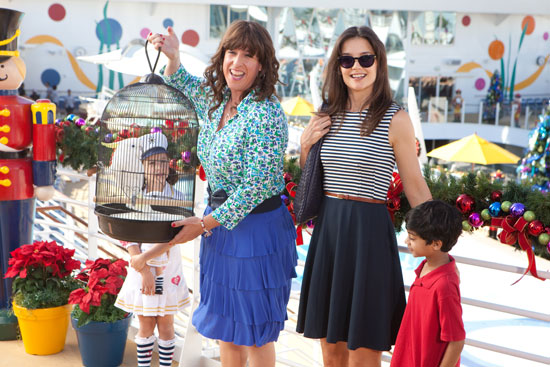 Perhaps the only thing more offensive than fart jokes and racist humor is the constant stream of product placement throughout the film, made convenient by the fact that Jack works in advertisement. There's literally a commercial for Pepto Bismol within the film when we see Regis Philbin taping an advertisement for the product. Jack and his associates also take healthy swigs of Pepto, making sure to point the label towards the camera, of course.

On the bright side, Jack's job does allow for one of the film's only highlights: Al Pacino. He steps in when Jack's client Dunkin' Donuts is desperate to land Pacino as the spokesperson for their new "Dunkaccino" drink. Pacino plays a bizarre version of himself who has suffered a nervous breakdown after exploding at an audience member during the actor's play. It's hard to believe the actor would agree to the role, particularly because it involves him playing an erratic version of himself, who becomes so obsessed with man-woman Jill that he's willing to take on the Dunkin' Donuts commercial if it means he can land her. Though I wondered if Pacino had lost a bet and had to star in the movie, the character's train wreck behavior is still the funniest thing about the film.

Jack and Jill could have treated sibling relationships in a funny and touching matter had it not been too concerned with cheap laughs. Instead, the film's most endearing moments come at the beginning and end, with montages of real-life twins talking about their relationships. I left the theater wishing I'd seen more of those scenes and skipped what ran in between.