Kellan Lutz is moving further away from his vampiric role in the Twilight films, but don't worry — he's still showing off his sex appeal. The actor lunges off cliffs, fights fellow gladiators, and breaks free from some serious chains in the trailer for Hercules: The Legend Begins, all while shirtless for essentially the whole time. Lutz stars as the legendary half-God in the film, exiled into slavery after his true love, Princess Hebe (Gaia Weiss), is forced into an arranged marriage with Prince Iphicles (Liam Garrigan). 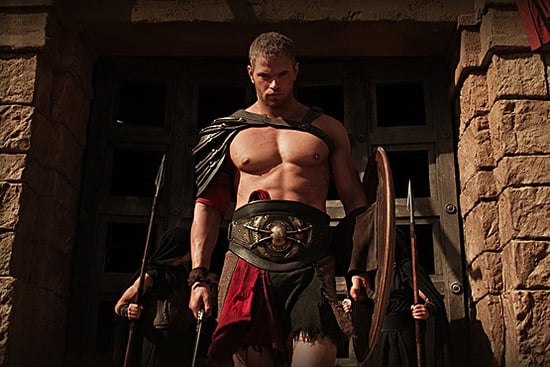 I'm willing to give Lutz's Hercules a chance, but to be honest, this doesn't look so amazing. I do appreciate the 300-like cinematography, but that look isn't nearly as novel as it was back in 2006, and this film doesn't have the benefit of being directed by Zack Snyder. Then again, who knows? Maybe Lutz will blow our minds. The movie opens next year, and you can watch the trailer after the jump.

TV
Behold, 26 Incredibly Talented (and Handsome) Asian Actors Who Deserve to Be Leading Men
by Monica Sisavat 16 hours ago

Movie Trailers
I Didn't Expect to Cry Today, Then I Saw the Trailer For The Last Letter From Your Lover
by Grayson Gilcrease 1 day ago

Brie Larson
Wondering Why Captain Marvel 2 Is Called The Marvels? Here's What to Know
by Stacey Nguyen 1 day ago