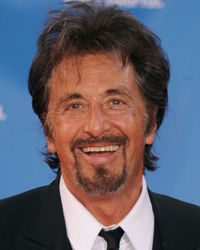 Hollywood is bringing together its acting dream team (and no, I'm not talking about The Expendables). Al Pacino is reportedly circling a film with fellow heavyweights Robert De Niro and Martin Scorsese; Scorsese regular Joe Pesci may also join the project. Titled The Irishman, the script follows the story of hitman Frank "The Irishman" Sheeran as told in the book I Heard You Paint Houses. So yes, it's a mobster drama — what else would you expect from these four?

Golden Globe Awards
Chloé Zhao Makes Golden Globes History: "This Is Why I Fell in Love With Making Movies"
by Yerin Kim 2 days ago

Golden Globe Awards
The Golden Globes Do Have a Live Audience, but It's Not Who You Might Think
by Amanda Prahl 2 days ago