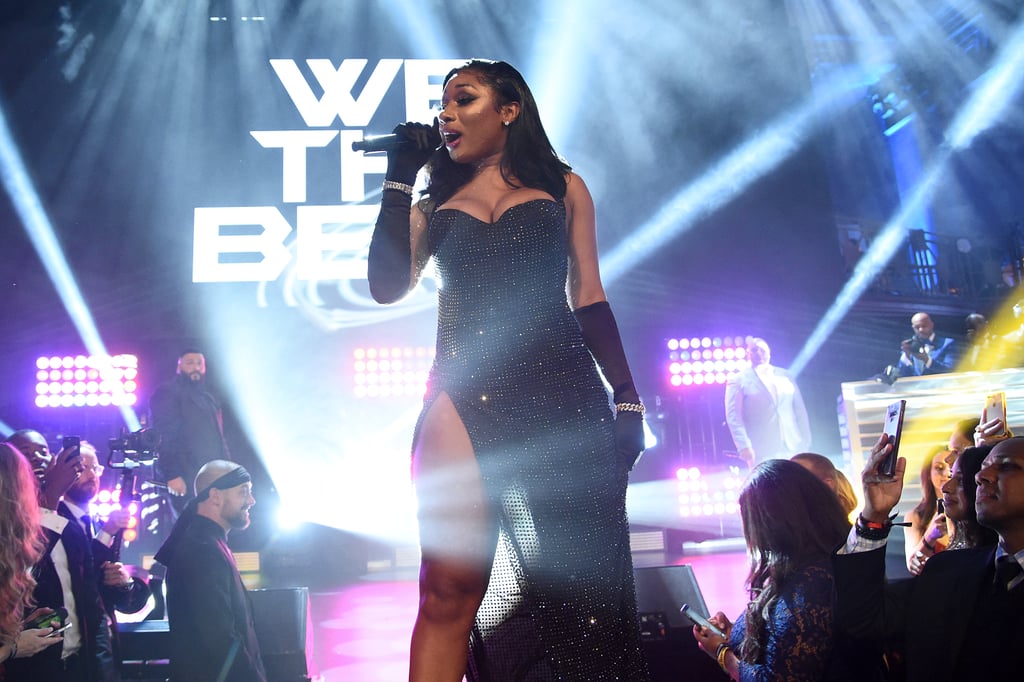 From NYFW to the Diamond Ball, Megan Thee Stallion Is Living Her Best Hot Girl Life

After single-handedly inspiring fans to have a Hot Girl Summer, Megan Thee Stallion is entering Fall with fun appearances at New York Fashion Week and Rihanna's Diamond Ball. While models strode catwalks and designers showcased their latest collections in the Big Apple, the 24-year-old rapper had some of her own adventures and celebrity meetups.

At Coach's Spring/Summer 2020 collection on Tuesday, she rocked a cropped graphic tee, leather skirt, and knee-high boots (making a case for why she belongs on a runway). She was in good company at the event, sitting next to Michael B. Jordan and chatting with the Just Mercy star. Megan also snapped a couple of pictures with Euphoria actress Barbie Ferreira, as well as Vogue editor-in-chief Anna Wintour. "HOT GIRL ANNA," she captioned the moment on Instagram.

On Sept. 12, the talented songstress then performed alongside Ty Dolla $ign and DaBaby on The Tonight Show Starring Jimmy Fallon. She later attended Rihanna's charitable Diamond Ball, where she stunned in a glimmering black gown before taking the stage to spit a few bars. She also hung out with RiRi herself, as well as Slick Woods and model Madisin Rian. "Diamond ball was lit," she wrote under a clip of her dancing in the bathroom with Kehlani and photographer Renell Medrano. Look ahead to see more photos and videos from Megan's big week in the city that never sleeps!

Celebrity Instagrams
That's My Best Friend: Saweetie's Pink Tie-Dye Sweatsuit Can Be Yours For $154
by Chris Roney 2 days ago

Billie Eilish
Yes, Billie Eilish's Futuristic Boots Are Out of This World
by Nikita Charuza 2 days ago

Anne Hathaway
Why Yes, Queen Anne Hathaway Dressed to the Nines For Her Virtual Movie Premiere
by Victoria Messina 3 days ago