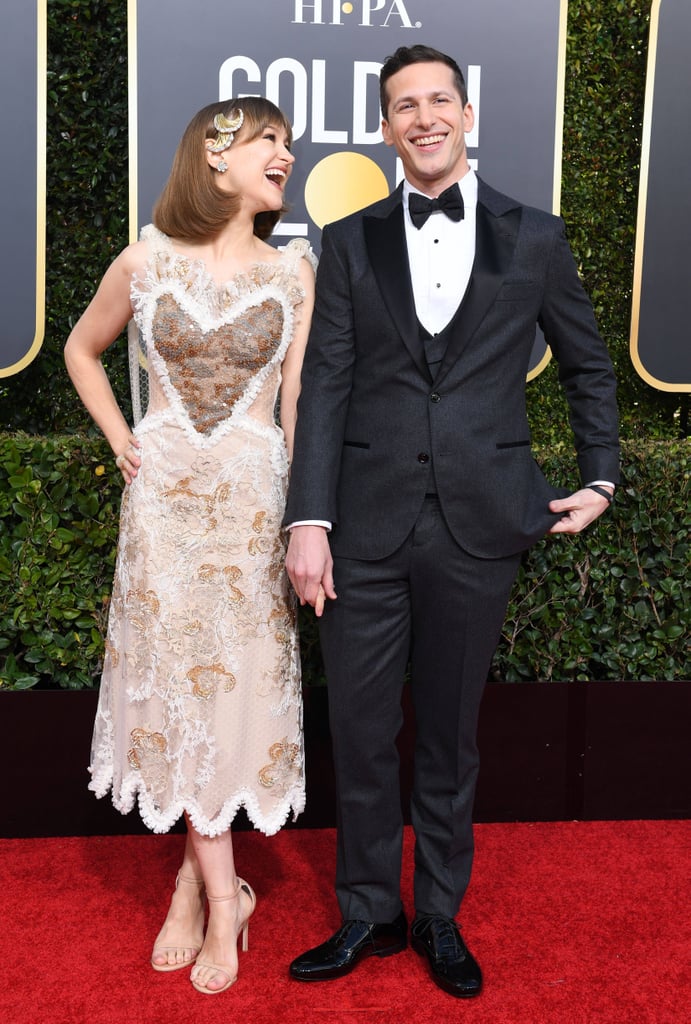 Andy Samberg arrived in style for his big hosting gig at the Golden Globes in LA on Sunday. Looking sharp in a tux and bow tie, the former SNL star — who already nailed it as an Emmys host in 2015 — held hands with his beautiful wife, Joanna Newsom. If you haven't heard her name much, it's understandable; Andy and Joanna have kept their relationship pretty low profile since they began dating in 2008. They (very) quietly tied the knot in 2013 and (even more quietly) welcomed a baby girl together two years later.

If you're not in the know, here is the scoop on Andy's wife. Joanna Newsom is a 36-year-old übertalented singer and harpist. She was born and raised in Northern California, classically trained to play the harp when she was young, and has folksy, almost childlike vocals. In 2004, she released her debut album, The Milk-Eyed Mender, which featured songs like "Sprout and the Bean," "Peach, Plum, Pear," and my personal favorite, "Sadie." She gained critical acclaim, releasing three more albums, most recently Divers in 2015.

A few more fun facts about Joanna? She started as a keyboardist in a San Francisco–based band called The Pleased; has appeared in Inherent Vice and on Portlandia (as has Andy); and is the second cousin (twice removed) of Governor Elect of California Gavin Newsom. Pretty cool, right?

Celebrity Facts
Get to Know Teyonah Parris, the Star Playing the Iconic Monica Rambeau on WandaVision
by Monica Sisavat 3 days ago