No matter what's been going on in the world lately, there's definitely one thing we can all agree on: Scott Eastwood is very easy on the eyes. The actor stepped out in Australia on Thursday when he and a friend enjoyed the afternoon at Sydney's Bondi Beach. In addition to taking a dip in the water, Scott, who recently channeled his famous father for Halloween, walked along the sand and soaked up the sunshine. But the best part about his outing has to be his impressive muscles. Scott is no stranger to ditching his shirt, though, and seems to be even more in his element when he's not wearing one. Most recently, we've seen him go for runs on the beach and go surfing with his rumored girlfriend, Charlotte McKinney. 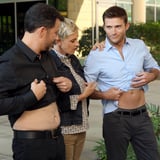 Jimmy Kimmel Loses Miserably to Scott Eastwood in a Game of Who'd You Rather?
Previous Next Start Slideshow
ShirtlessScott EastwoodEye CandyScott Eastwood Shirtless Pictures
Around The Web