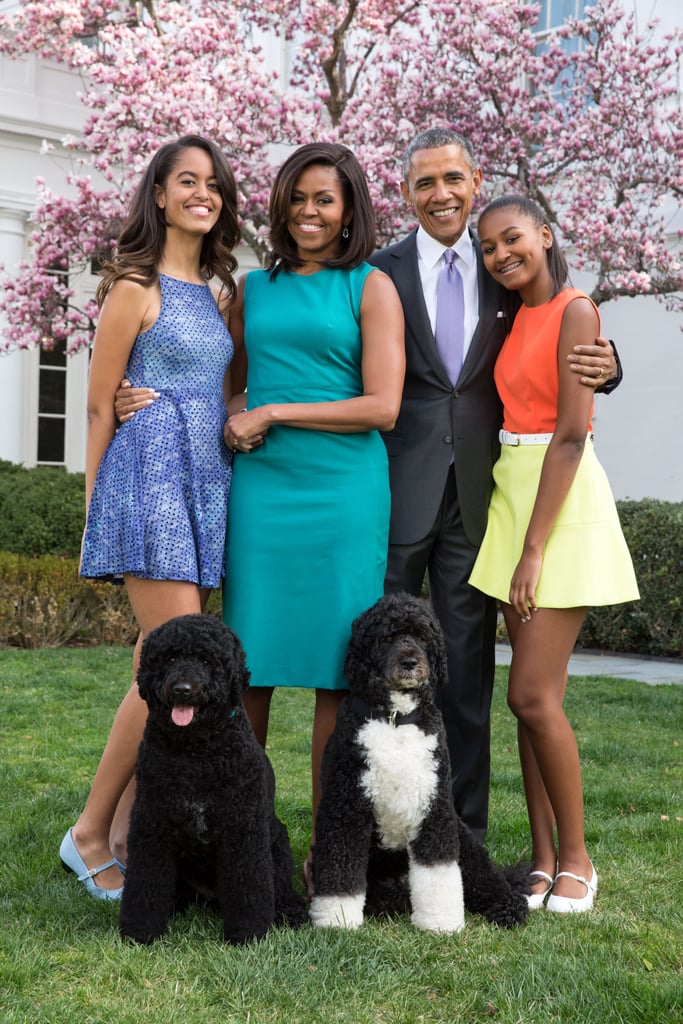 While campaigning to be president, Barack Obama made a serious, binding agreement with his young daughters, Sasha and Malia: if he won the election, he'd buy them a dog. Luckily for them (and us), it happened. During his victory speech in 2008, he conceded that they'd "earned the new puppy that's coming with us to the White House," and they were soon gifted with a Portuguese Water Dog by Senator Edward M. Kennedy, who owns several dogs of the same breed himself. They named him Bo and ended up adopting his nearly identical sister Sunny in 2013.

The playful dogs have popped up in plenty of photos with Barack, Michelle, Sasha, and Malia over the years, whether tugging their owners across the lawn during walks or casually leading the president through a Petco. In honor of their last few days in the White House, we've rounded up the family's most touching moments with their beloved pets.

Related:
The Obama Girls Have Grown Up Before Our Eyes
Previous Next Start Slideshow
Michelle ObamaBarack ObamaCelebrity PetsCelebrity FamiliesBo Obama
Around The Web

Late Night With Seth Meyers
Kathryn Hahn's Kids Were Mortified to See Her Rehearse For WandaVision: "Oh My God, Mom!"
by Karenna Meredith 1 day ago

Liam Payne
Liam Payne's Son, Bear, Has an Ear For Music — He's Already Listening to His Dad's Songs!
by Emily Weaver 2 days ago