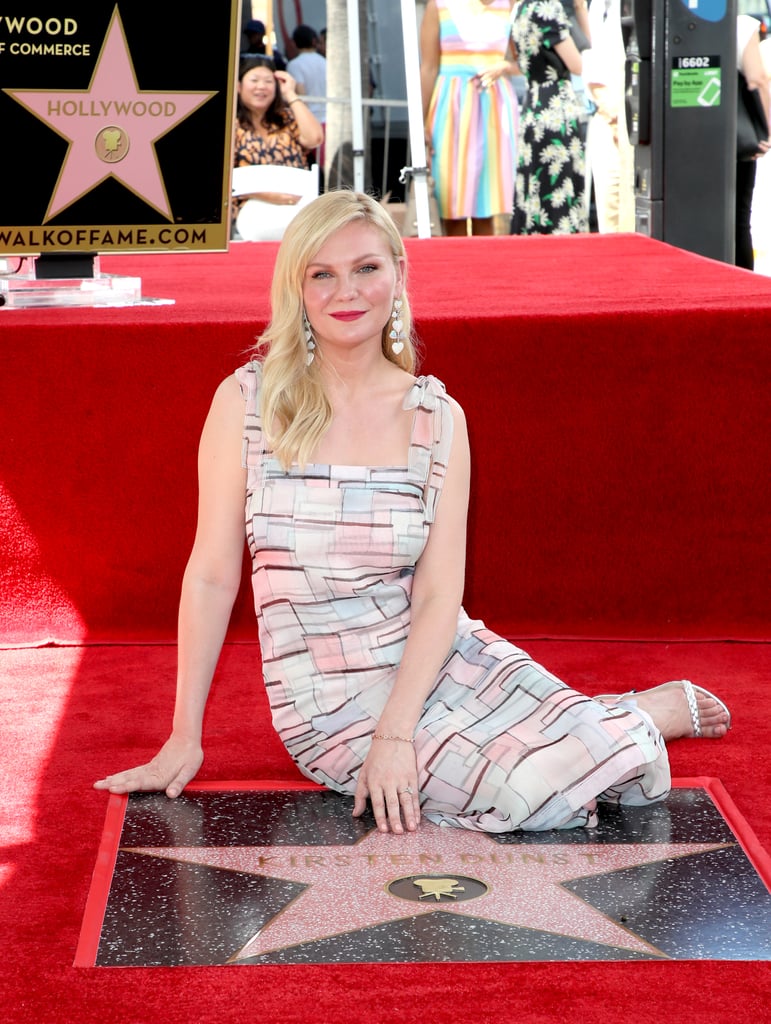 Kirsten Dunst was (finally) recognized with a star on the Hollywood Walk of Fame in LA on Thursday. The star of On Becoming a God in Central Florida, who has been in the game for over 30 years, stunned in a printed dress as she attended the ceremony with her fiancé, Jesse Plemons, who gave a heartfelt speech to the audience. Also on hand for the big event were Kirsten's parents, Inez and Klaus, as well as director Sofia Coppola, who has worked with Kirsten on four films since 1999. Sofia also spoke to the crowd about her longtime friend and collaborator, praising Kirsten's intelligence and grace. Kirsten was visibly teary as Jesse took the podium and spoke about their first meeting; the couple began dating in 2016 after playing a married couple on Fargo. "I love you, Keeks," he said. "And I couldn't be any prouder of you than I am right now."

Kirsten got her start in the movie industry at just 12 years old, when she starred as Claudia in Interview With the Vampire — the role nabbed her a Golden Globe nomination as well as her first kiss, which she shared with (the much older) Brad Pitt. Since then, she's given us memorable performances in The Virgin Suicides, Bring It On, Drop Dead Gorgeous, and the Spider-Man trilogy — not to mention my personal favorite, Dick.

Despite her many career accomplishments, Kirsten opened up about feeling "underestimated" by Hollywood in a recent interview on Sirius XM. "I've never been recognized in my industry," she said. "I just feel like, what did I do? I'm so chill. Maybe I don't play the game enough." Hopefully this massive honor will change that — Kirsten is a Hollywood veteran who deserves all the accolades possible.

Related:
Why Kirsten Dunst's On Becoming a God in Central Florida Will Be Your New Favorite Show
Previous Next Start Slideshow
Kirsten DunstJesse Plemons

Kirsten Dunst
Kirsten Dunst and Jesse Plemons's Son Is Such a Cutie Pie — and Already a World Traveler!
by Emily Weaver 2/19

Gabrielle Union
Show Me Your Spirit Fingers, 'Cause Gabrielle Union and Kirsten Dunst Just Had an Epic Reunion
by Yerin Kim 8/25/20

Nostalgia
Looking Back at the Bring It On Red Carpet 20 Years Later — Yes, Toe Rings Are Involved
by Sarah Wasilak 8/25/20

Gabrielle Union
Bring It On: Put Your Spirit Fingers Up For These 12 Fun Facts
by Hedy Phillips 8/26/20