George and Amal Clooney are on a roll! After turning heads at the LA premiere of Catch-22 and Omega's 50th anniversary Moon Landing event in Florida, the couple touched down in Rome over the weekend. On Sunday, George and Amal were spotted celebrating Mother's Day at Pierluigi restaurant. George was ever the gentleman as he helped his wife out of their car and held her hand as they walked — and you thought chivalry was dead.

George and Amal famously wed in Italy in September 2014, and three years later, they welcomed twins Alexander and Ella. Most recently, the actor opened up about his family during an appearance on the Today show, saying, "They're not terrible twos. They're good kids. They're happy kids." We hope Amal enjoyed her Mother's Day date night! 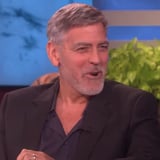