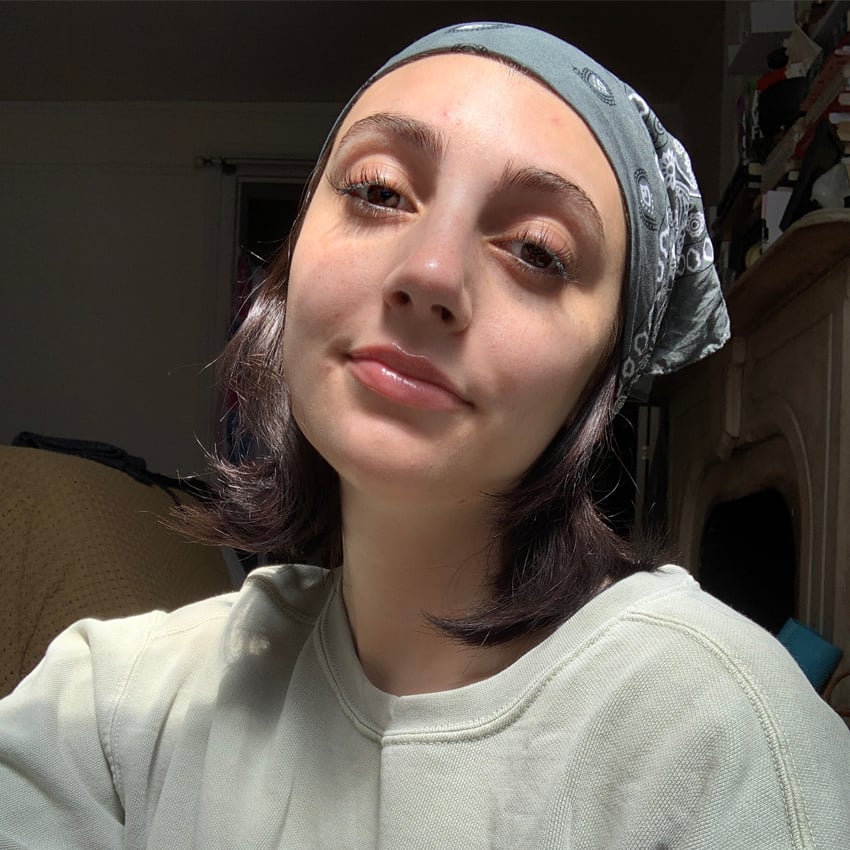 I try to never complain about my acne. I always think, there are other people who struggle with worse (there are), who have to go on Accutane as a last resort, who deal with the constant stigma that acne-prone skin means they're "dirty" when, in fact, we all know those people have probably the most impressive skin-care routines and are diligent about cleansing.

Still, my battle with acne is ongoing and has been since I was in middle school. It's only recently that I've been reminded just how internalized the shame of my acne-prone complexion haunts me. Like a lot of people sheltering in place, I've spent the past three months dealing with an army of pimples on my face. Unlike past circumstances, I can't explain these breakouts, why they're happening, how to prevent them, and why they make me feel so horribly out of control.

Like a lot of people, puberty didn't treat me well. My cheeks, chin, and forehead were constantly speckled with inflamed bumps that I couldn't ever seem to heal. By high school, I was on a birth control pill that luckily curved my breakouts for years — until 2017. By that time, I'd been on hormonal birth control for eight years. I'd still get monthly breakouts, but nothing I couldn't handle or would last all that long. My skin is prone to scarring, so that was likely my biggest skin concern at the time. Still, I remember wondering what it would be like to just simply go off the pill for a while — to give my body a break and reset. So, I stopped taking it for one whole year. Unfortunately, that's when a lot of acne memories unlocked for me. My skin immediately erupted in cysts, so much so that each morning I'd wake up with a new one — each one harder to heal and cover up with makeup.

We're obsessed with Selena Gomez's look in her "Fetish" music video, so we tried recreating it at home 😘

At the time, I was filming a lot of videos for the company I worked for, which meant my insecurities were on full display. There's one video in particular that I recently revisited and, for the first time, ever, read the comment section. The masochist I am read through all 418 comments with no idea just how harsh the words from strangers would be. As if the voice inside my head didn't make it difficult enough to deal with unexpected breakouts, the paragraphs from people I didn't even know cut deeper. No one should be ashamed of something they can't even control. No matter how many times I've told myself throughout the years that acne was OK, I was beautiful, the bumps and scars didn't matter, my internal monologue fought to tell me otherwise — and still frequently does.

I'm sure I'm not the only person who's been late to work because they've spent all morning agonizing in the mirror over their acne — just staring, realizing just how out of your control it feels. I'm not a skin picker, but I mentally pick and poke in my mind trying to imagine how much happier I'd be without the constant intrusion of my acne. Eventually, I went back on my prescription, and the breakouts cleared up within a few weeks (although, the scars took months to clear up). I was thankful that finally my skin-care routine could once again be cleared of the benzoyl peroxides, the salicylic acids, and the clay spot treatments that ruined my pillows.

Fast-forward three years, and suddenly we're in the midst of a global pandemic, one that's forced the majority of the US to shelter in place. My skin didn't like this just as much as the crowds of people protesting your local hospital didn't. Just like that, my acne returned, but unlike before I didn't really know why. I wasn't going through puberty again, I was very consistent with taking my prescription, and nothing had changed too much in my actual routine — well, except not going outside. Maybe that's it, I've wondered, maybe my skin likes the city smog, maybe it prefers the polluted subway tunnels or the dry air of an office. Maybe, even, it really liked makeup, and now that I barely wear it, my skin is holding the drastic lifestyle change against me.

Fast-forward three years, and suddenly we're in the midst of a global pandemic, one that's forced the majority of the US to shelter in place. My skin didn't like this just as much as the crowds of people protesting your local hospital didn't.

This is the first time I've really spent a lot of time talking about my acne. In fact, the last time I even tried to write about my acne — a review about a spot treatment — a former editor of mine told me I must be body dysmorphic to think I had acne at all. (For the record, Body Dysmorphic Disorder is a very real mental illness that affects up to three percent of the general population, and it's not a joke most people would take lightly.) What she saw at work was a person using hormonal birth control as a shield and hope that my acne would sit on the back burner for as long as I needed it to — plus a lot of full-coverage concealer. Again, I don't have the most challenging acne in the world. What I do have is the kind of anxiety that forces me to think, and think, and think about why I have a pimple near my lip when I haven't had a pimple there in years. What am I doing wrong, I wonder constantly — and I know I'm not alone. 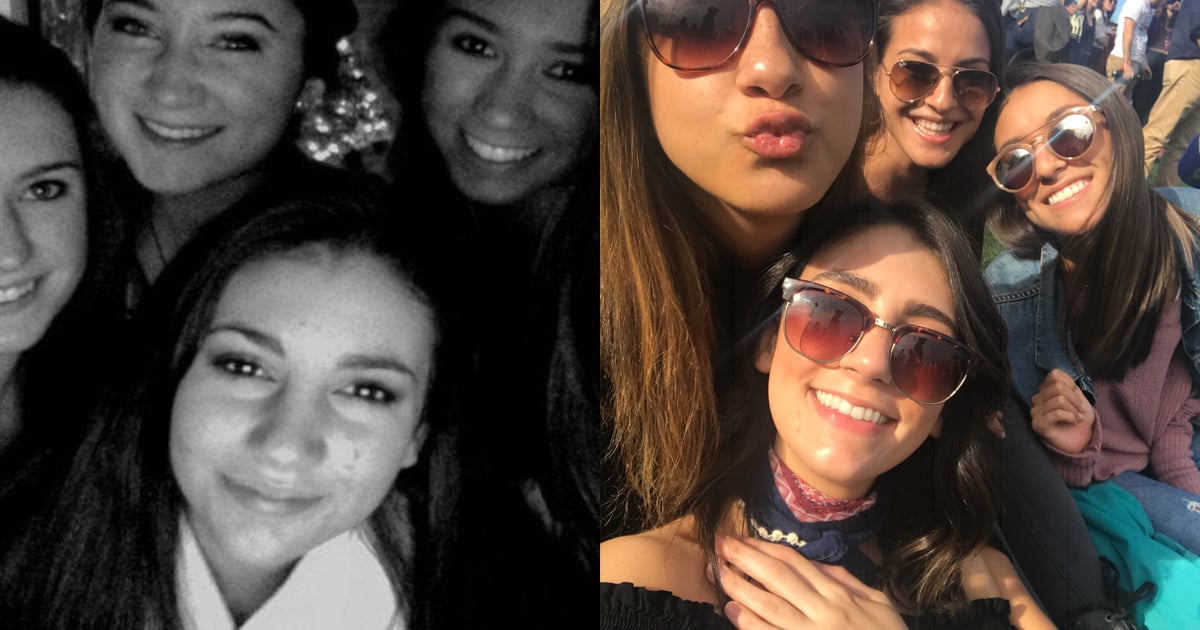 While planning this story, I dove deep into archived photos of myself in high school, college, and the years that have followed. I wanted to track down exactly when acne seemed to hit me hardest because every time I tried to search my memories, I couldn't pinpoint specific moments or periods of time when I felt the most plagued by it. I'm sure if I asked a professional, they might suggest I blocked it out, buried the memories because it's easier to just think your skin is fine now and it was never and will never be an issue again. Of course, that's not true.

So, I found old Photobooth pictures of me and my friends circa 2010 featuring hard bumps covering my chin and cheeks. Then, I found more proof from 2017 when I spent an entire summer with my friends doing everything a 20-something should be doing, but every photo I looked at just reminded me of the sinking feeling I felt in my stomach when I'd take a picture with them and the envy that washed over me when I'd look at their skin and wonder why mine couldn't be the same. In fact, it was almost impossible to find photos from 2017 that didn't use a Snapchat filter, and I know why. (Note: I still use filters, and it's OK if you do, too.) 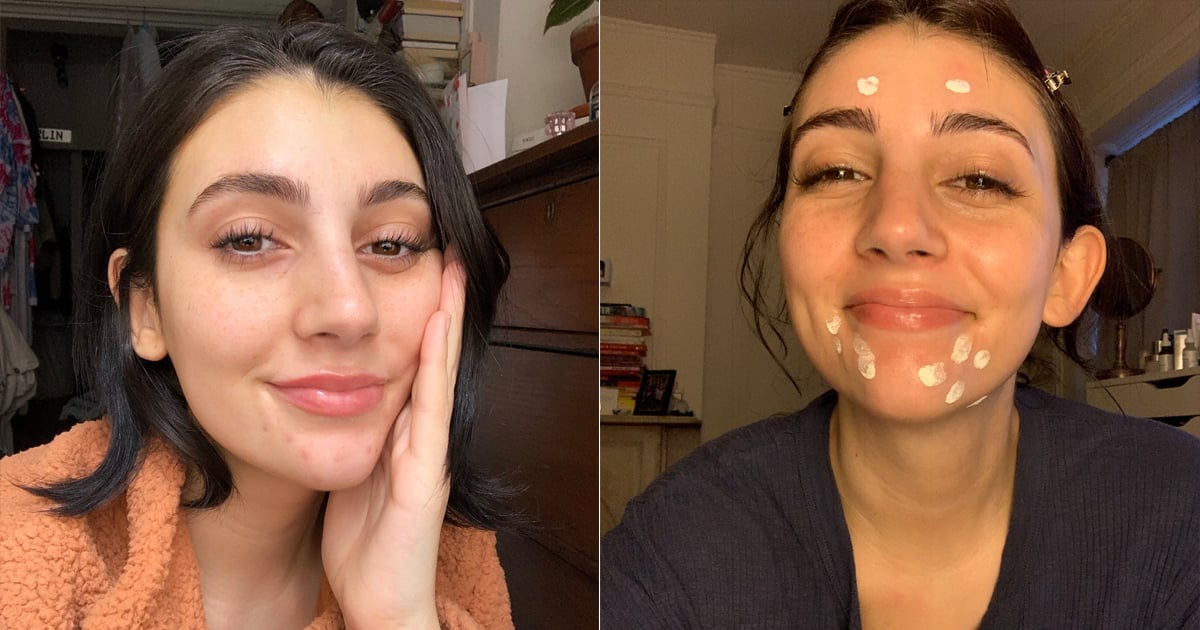 Here's the thing: no one knows when life in New York will seem "normal" again. So, I've decided now might as well be the time to attack my biggest insecurity head on: invest in the right formulas, be as diligent as possible, smile in a selfie even though my chin is physically sore, and on the many days I struggle with the sight of new cysts and old scars that are most unwelcome to let it go. I'm not passionate about meditating, but I remember when I tried to get into the practice, I listened to a guided audio that recommended for busy minds to allow thoughts to come and go like cars on a street, to imagine myself sitting on a stoop literally watching a traffic pass me by. So, I'll be trying that with each new pimple that emerges.

Until I completely overcome the sense of defeat I feel when I sense a new spot surfacing, here's to the clay drying on my chin as I type.

Summer Fashion
Move Over, House Dress; This Spring Is All About the Slip
by Claire Stern 4 days ago

Fashion News
Yes, We're Still Talking About Guess's Telfar Handbag Knockoff, Because It Was So Wrong
by Kedean Smith 4 days ago