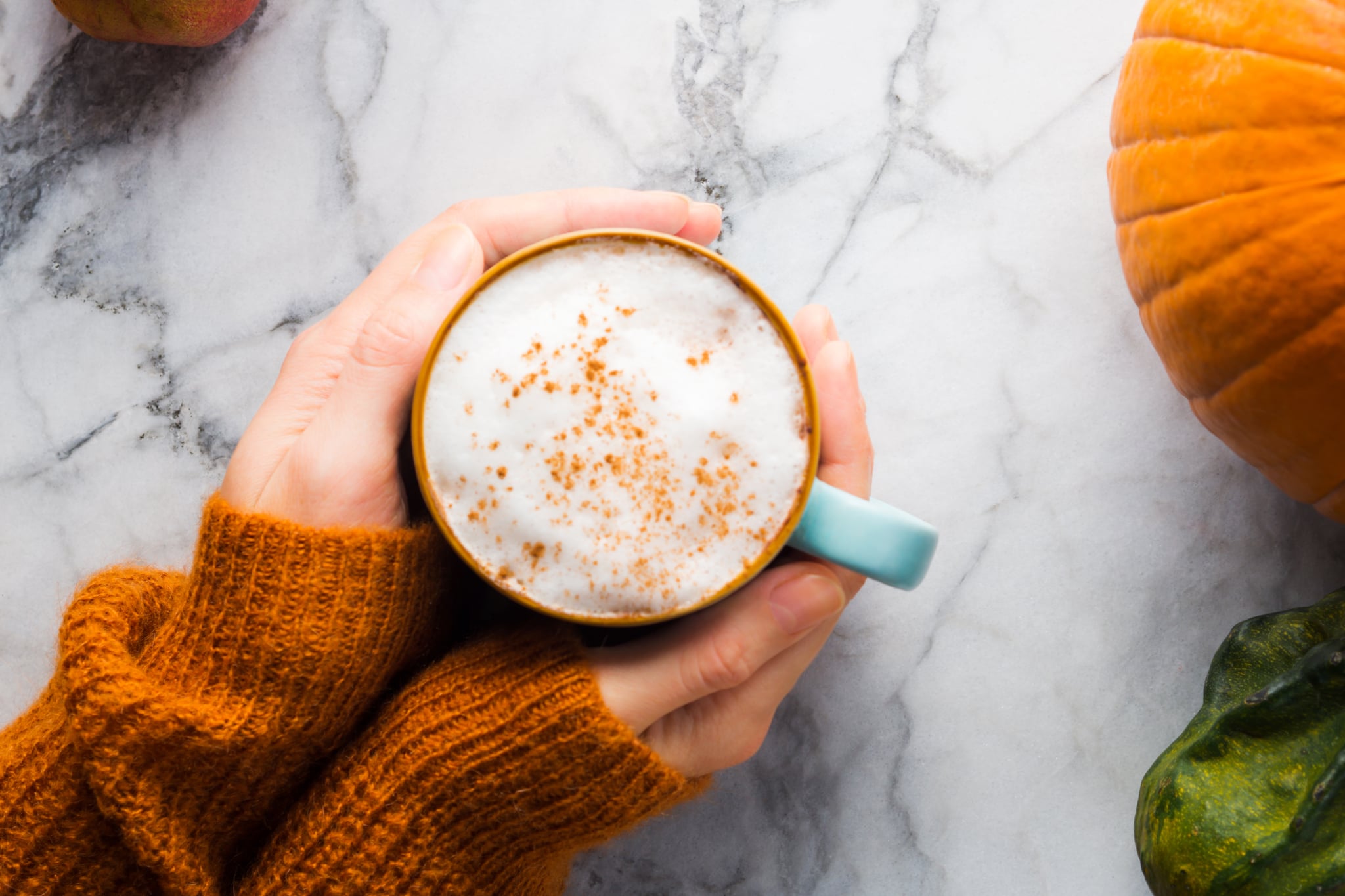 As much as I'd like to say I start off each morning with a healthy kale smoothie, most days, the first thing on my mind when I emerge from my slumber is coffee. Especially on days when I have hit snooze on my alarm too many times to count and have to rush out the door, I usually prioritize brewing a cup of coffee over anything else (sometimes I even skip washing my face).

After turning to two skin experts, I discovered that this is quite possibly the worst morning routine I could have. Not only because I skip washing my face, but also because I supplement the habit by drinking a cup of coffee with tons of artificially flavored coffee creamer. If you're drinking more coffee than normal during pumpkin spice season and you're breaking out more than normal, too, dermatologist Dr. Julia Laemmerhirt, MD, said your pumpkin spice latte could be to blame. Pumpkin spice lattes enjoyed in moderation don't present much of a risk, but if you're drinking multiple cups a day, every day, it might be wreaking havoc on your skin for three key reasons: caffeine, acidity, and sugar.

What Does Consuming Too Many Pumpkin Spice Lattes Do to Your Body?

Dr. Laemmerhirt described caffeine as a double-edged sword. "Coffee triggers a stress response in the body," she told POPSUGAR. "And actually, this is why we drink coffee, because we want to feel awake and alert. Coffee raises the heartbeat a bit, it wakes our mind up, and we feel ready to tackle the day — but this is a reaction of the sympathetic nervous system, [known as] the flight or fight system." Dr. Laemmerhirt added that if we drink coffee throughout the day, it might help us to work for longer periods, but it doesn't give the body a chance to do its rest and rejuvenation work. In short: it's an abuse of the drink. Even though pumpkin spice lattes are effective in keeping us energized, the caffeine puts our body into overdrive, activating a stress response that increases the levels of cortisol in our body.

What Does Cortisol Have to Do With Acne?

Cortisol is a stress hormone that leads to inflammation — and in the morning, our cortisol levels are already naturally high. "If you wake up nervous or already a little stressed, then drinking coffee will push the button a little bit more . . . which will create more inflammation," Dr. Laemmerhirt said. "And, of course, inflammation is the ground stage where acne occurs." If you're trying to de-stress with a festive fall coffee, pumpkin spice lattes technically have the opposite effect, and that's bad news for your acne.

Does Decaf Coffee Have the Same Effect on Acne Breakouts?

According to Dr. Laemmerhirt, drinking decaf coffee can also negatively impact acne. "Coffee is acidic — in fact, everything roasted is more acidic — and when you have an acidic body, you also have inflammation," she said. "Even if you choose caffeine-free coffee, you still have the acidic part [of the coffee bean]. The other thing is, the process to decaffeinate the coffee beans adds a lot of chemicals into the mix that your body needs to get rid of." According to Dr. Laemmerhirt, a decaf pumpkin spice latte isn't any better for you than a regular one, because you're just replacing one bad thing with another. Even though you don't have to worry about inflammation caused by caffeine, you still have to worry about inflammation caused by coffee's natural acidity and chemical additives.

Since Lattes Are Made With More Creamer Than Coffee, Are They Better For Acne?

Pumpkin spice lattes are typically filled with artificially flavored creamers and sugary syrups, making it no better than drinking a regular coffee. The sugar content of that pumpkin spice creamer you're pouring into your coffee every morning is so high that you might as well be drinking an extralarge milkshake, and Dr. Tanuj Nakra, MD, of TOC Eye and Face explained that's not doing your skin any favors. "Sugar gets broken down into glucose in our bodies, which raises our insulin levels. Insulin spikes are a major trigger for inflammation in our bodies," he said. For an inflammatory skin condition like acne, combining two inflammatory foods (supersugary creamer plus caffeinated coffee) is not ideal. This increase in insulin not only causes inflammation, but it also breaks down collagen and produces pore-clogging testosterone — so Dr. Nakra advises staying away from those sugary syrups and creamers.

Does This Mean You Have to Give Up Pumpkin Spice Lattes Altogether?

Short answer? Not entirely. Dr. Nakra assures us an occasional sweet treat can be a reasonable indulgence. "Truly rare doses of sugar won't cause breakouts," he said. So if you're still craving a pumpkin spice latte, try making one from scratch at home so you can control the amount of sugar that's going into it. Moderation is key, and Dr. Laemmerhirt agreed, saying you can still drink coffee every day, but it's best to enjoy only one in the morning and swap the rest for tea throughout the day. She recommends green tea specifically because it's not acidic. "It's actually the opposite," she said, adding that "it has antioxidants and anti-inflammatory effects, so you can counterbalance the body's stress response."

Do You Actually Like Pumpkin Spice Lattes, or Are You Just Addicted?

That's the last question you have to ask yourself, because caffeine and sugar addictions are very real. "If you are constantly craving sugar, in the form of candy, chocolate, or Frappuccinos, for example, then it is likely you are addicted," Dr. Nakra said. It's tempting to indulge in as many pumpkin spice lattes as possible before the season is over, but if it's beginning to give you acne, that's definitely a sign you should cut back on them. Pumpkin spice season is one of the best parts of the year, but don't let it be ruined by a bunch of bad breakouts.

Jennifer Lopez
Finally, the Wait Is Over: See All of the Products In Jennifer Lopez's Line, JLo Beauty
by Jessica Harrington 11 hours ago

Beauty News
This Beauty Set Will Please Even the Pickiest of Skin-Care Fanatics, Like Hyram Himself
by Jessica Harrington 2 days ago 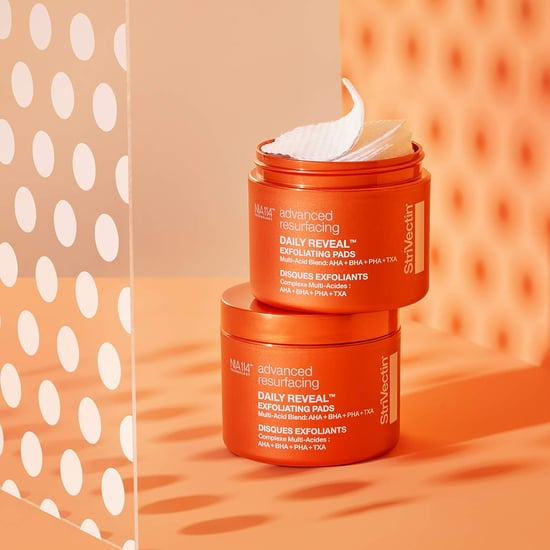